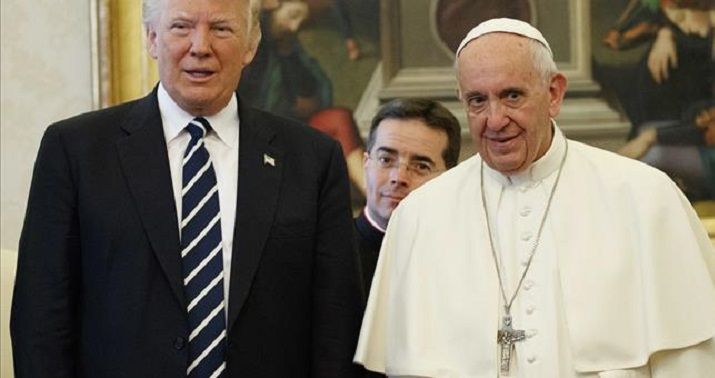 The PAC’s brand new Twitter account has the ad pinned to the top of its page. Check it out:

.@realDonaldTrump, the days of using our faith for your benefit are over.

We know you need the support of Christians like us to win this election, but you can’t have it.

Not our vote. Not our faith. pic.twitter.com/sT85pEQx8e

As you can see, there are quick shots of Trump and Stormy Daniels, of Jerry Falwell, Jr., Trump and Christians praying together, and of course, the photo of Trump holding up a Bible in front of St. John’s Episcopal Church in Lafayette Square. The implication is that the Christians in the anti-Trump PAC are better Christians than those who support Trump. There is really no other way to look at it. It’s your right to disagree with the prosperity gospel leaders in megachurches or tele-evangelicals but who are any of these political people to judge others for supporting Trump?

The ad and last-minute effort just a couple of weeks out from Election Day smack of desperation. I’m not quite sure why the ‘bipartisan’ coalition is wasting its time and money, to be honest. The president has enjoyed strong support from religious voters and still does. Recent polling shows his support from white evangelical protestants has slipped a bit from 2016 levels but he still is at 78% support with that demographic. According to Pew, the latest polls show that Biden leads with other religious groups, including black protestants.

President Donald Trump continues to be White Christians’ preferred candidate for the November election, but support among voters in three major traditions – White Catholics, White Protestants who are not evangelical and even White evangelical Protestants – has slipped since August, according to a new Pew Research Center poll.

Among White Catholic voters, Trump is ahead of Biden by 8 percentage points: 52% in this group say they would vote for Trump (or lean that way) if the election were held today, while 44% favor Biden. This gap has narrowed significantly – Trump was 19 points ahead of Biden (59% to 40%) the last time this question was asked in a poll conducted in late July and early August.

Support from White Protestants who do not consider themselves to be evangelical or born-again has dropped at a similar pace: 53% say they would vote for Trump if the election were today, down from 59% who said this in the summer poll. Even White evangelical Protestants have softened slightly in their support for Trump, though they overwhelmingly remain on his side: 78% of White evangelicals intend to cast ballots for Trump, compared with 83% who said this in August.

So, Trump looks pretty solid so far with the evangelicals. The PAC is headed by an Obama guy, Michael Wear, and Autumn VandeHei, an aide to former GOP Rep. Tom DeLay. If the name VandeHei sounds familiar it is because she is married to Jim VandeHei. He is the co-founder and CEO of Axios and the former executive editor and co-founder of Politico. Before that, he was a national political reporter at The Washington Post, and worked as a White House correspondent. In other words, these aren’t just some grassroots Christians but well-connected political activists who are doing what they accuse Trump of doing – exploiting Christianity for their own benefit. In this case, it is to defeat Trump as they are Never-Trumpers. Those who identify as Christians have protested Trump many times, this is just the latest example of their efforts.

“Trump eked out 2016 with unprecedented support from white evangelicals and, important to note, a really strong showing among Catholics. We’re going after all of it,” Wear told the AP. “We think Christian support is on the table in this election.”

The irony is that Trump is often referred to as the most religion-friendly president in recent years. He was the first president to speak at the annual national pro-life rally in D.C. and has been a strong supporter of religious freedom. The pro-life community refers to him as their greatest ally. The ad states that Christians “don’t need Trump to save them. The truth is that Trump needs Christians to save his flailing campaign.”