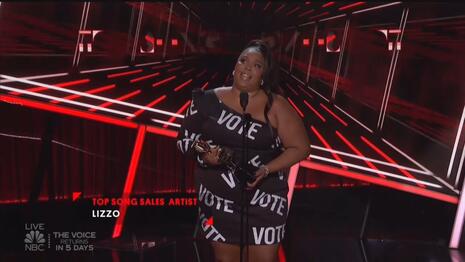 The message was clear during the 2020 Billboard Music Awards. Throughout the broadcast, which aired on October 14 on NBC, several left-wing singers delivered a get-out-and-vote message.

Billie Eilish, who endorsed Joe Biden and spoke at the DNC, was the first artist to mention voting. She accepted the award for Top Female Artist and reminded the viewers to vote, as well as a reminder to be safe in the year of the coronavirus.

Oh my God, this is so nuts. Thank you so much, Billboard thank you to all the women that have come before me and paved my way. I love you, please vote. Please wear a mask, please wash your hands, be safe.

The longest political speech came from Lizzo, who touted impeachment against President Trump last year. She won the Top Song Sales Artist Award. Lizzo sashayed out in a VOTE outfit and spoke about suppression.

Lizzo: Hi. I just want to say, thank you to Billboard, thank you to Atlantic, thank you to team Lizzo, thank you to everyone who listens to my music and supported me I just want to say, I’ve been thinking a lot about suppression and the voices that refuse to be suppressed I wonder, would I be standing here right now if it weren’t for the big black women who refused to have their voices be suppressed I just want to say right now, if you’re at home watching this, you are thinking about changing yourself to feel worthy, this is your sign to remain true to who you are. Let me tell you all something. When people try to suppress something, it’s normally because that thing holds power they’re afraid of your power there’s power in who you are there’s power in your voice. So whether it’s through music, protests, or your right to vote, use your power use your voice and refuse to be suppressed. Thank you so much to Billboard.

The Mayor of Atlanta, Keisha Lance Bottoms, introduced the Inaugural Billboard Change-Maker Award winner. She began her speech by acknowledging “these are hard times across the country. Americans are living with the impact of COVID-19, economic hardship, and the crushing pain of systemic racism.” The winner of the award was Atlanta rapper Killer Mike.

Singer Demi Lovato sang her anti-Trump song for the audience. The song is titled “Commander in Chief” and she repeats the line, “How does it feel to be able to breathe?” That is likely a reference to police brutality and the street protests/riots because the lyrics also include, “We’ll be in the streets while you’re bunkering down.” From the chorus: “Commander in Chief, honestly / If I did the things you do, I couldn’t sleep / Seriously, do you even know the truth? / We’re in a state of crisis, people are dying / While you line your pockets deep.”

Interestingly, the broadcast did not show the huge word “VOTE” that appeared behind her at the end of the song, although the official NBC account tweeted a picture of it: 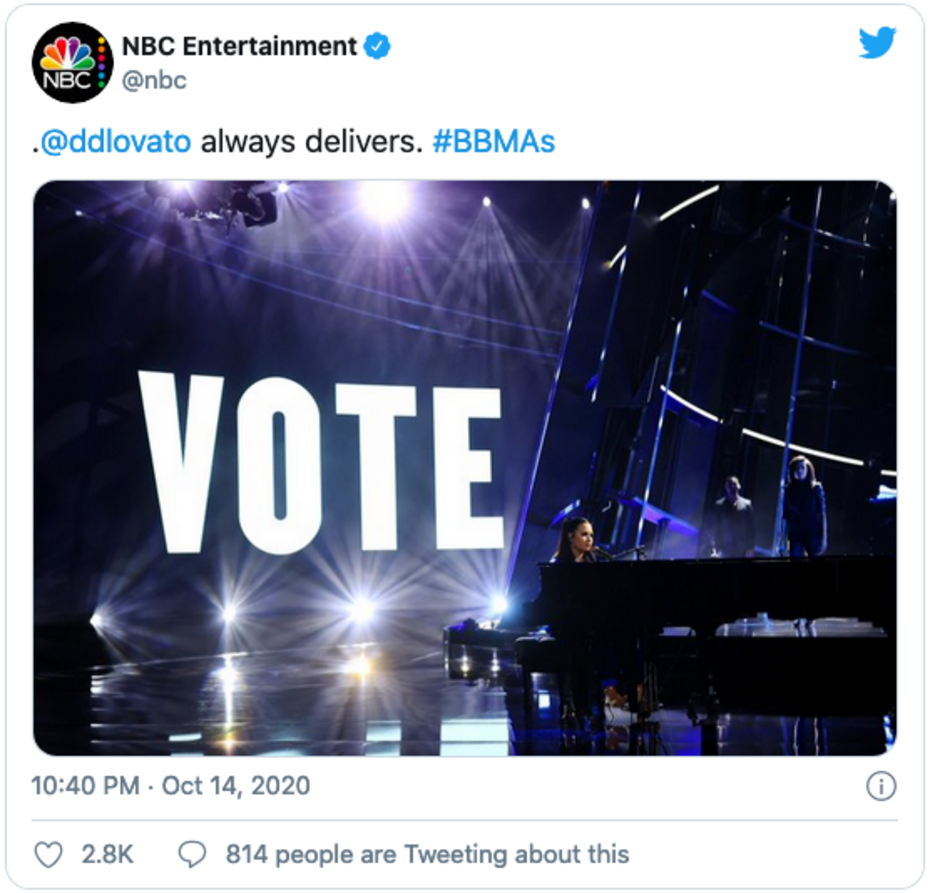 The Billboard Awards were not as message-heavy as perhaps might have been expected but it was enough to make many roll their eyes at the activists’ messages, no doubt. I suppose it was too much to expect a lecture-free awards show this year, especially this close to the general election in November.