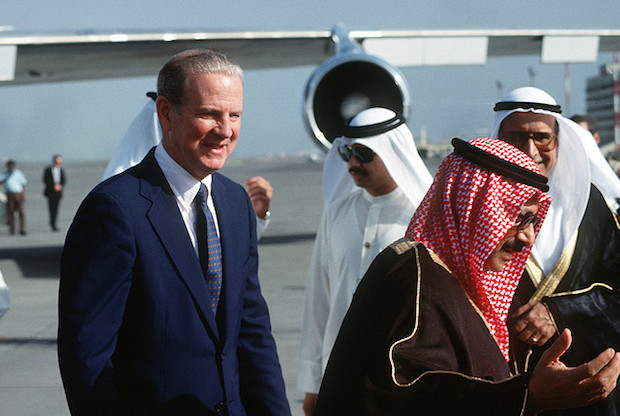 The Man Who Ran Washington, the Life and Times of James A. Baker III, Peter Baker and Susan Glasser, Doubleday, 585 pages.

In February of 2016, Antonin Scalia, a legend of “movement” American conservatism — and an icon of perhaps its great success (remaking America’s courts) — had suddenly passed. He was Cheney’s friend. But for Republican Party elders like the former vice president, there would be little time to savor a life’s triumphs. There was a sense it was all coming apart— notwithstanding a life’s end for a giant.

“You have the leading candidate for the Republican nomination attacking President [George W.] Bush and you and the decisions made by the Bush administration,” Fox News anchor Bret Baier reminded Cheney. “You heard at the debate Saturday Donald Trump accusing Bush and his team of purposely lying the country into war in Iraq: ‘I will tell you they lied, they said there were weapons of mass destruction, there were none. They knew there were none.’”

“He sounds like a liberal Democrat ,” Cheney told Baier. “He’s wrong. And I think he’s deliberately promoting those views in order to advance his political interest.” Trump had also gone further, claiming the Bush administration had been asleep at the switch on the morning of the September 11, 2001 terrorist attacks. “As soon as we were hit on 9/11 — I know a little about it — I was in the White House bunker all that day. … I didn’t see Donald Trump there.”

When Trump triumphed four years ago and was then inaugurated, Cheney remarked of his notorious “American carnage” address: it was “not a speech I would have given.” While onlookers can review the tape themselves (just as with the Zapruder film), Cheney’s former boss, President George W. Bush, is reputed to have told Hillary Clinton of the speech, “Well that was some weird s**t.”

And yet, by all rights, Cheney had voted for the man. Earlier in the year, he said as much. He broke news in September 2016 by joining (at the time) painful ranks of GOP officials who declined to endorse the Manhattan mogul but who also would grimly concede to anyone who asked that they would vote “for the nominee of my party,” as they always had. The only previous, living Republican nominee for president to vote for — and endorse — Trump in 2016 was Bob Dole. Trump exhausted both Presidents Bush, and infamously toiled with John McCain and Mitt Romney.

But beneath the surface lingered an anxiety for many in the old guard, one that remains today as Americans again vote on the question of the White House.

For some, there is a sense that refusing to vote for Trump means bolting from the party altogether— especially now that Trump is president. Even trenchant critics of Trump’s — such as Republican Sen. Ben Sasse, who this week reportedly decried the president as dictator-coddler, white-supremacist-curious and a secret Evangelical-hater — have been loath to explicitly declare they’re not voting for the man. Though Sasse is a young man, he has a pedigree of an older one, with an armory of Ivy League degrees and the favor of the party’s Reaganite donor set. He was once touted as a future president — and still occasionally is — but there is a sense his star has faded, at least as long as the Trump supernova burns. And the fear for Sasse and others, is that to renounce Trump entirely, even at this late hour, is to risk being cast out of paradise.

This instinct, however, elides some facts. Trump, known to be flagrantly petty, nonetheless did not exactly form his first cabinet based on loyalty, to the chagrin of Trump’s nascent, nationalist and populist movement. Rex Tillerson, John Kelly, James Mattis — these are center-right figures whom it is entirely unknown if they voted for Trump in 2016. It is unknown if one or two of them even voted for his direct opponent, Clinton. Yet, in the early days of the Trump administration, they were his secretary of State, chief of staff and secretary of Defense, quite arguably the three most coveted positions in Washington outside the presidency itself.

Cheney and another figure, James A. Baker III, would know this.

Both at times have occupied these vaunted positions. Cheney was chief of staff to Gerald Ford, and secretary of Defense to George H.W. Bush. Baker was secretary of State for the elder Bush, as well as later his chief of staff, as he had been for his predecessor, Ronald Reagan. A generation ago, in the heyday for both these figures, the idea that it would be unknown if Cheney had voted for Ford, or George H.W. Bush, or the president whose ticket he engineered (George W. Bush), would have been absurd.

There have been rumors about figures before. In Barry Gewen’s new biography of Henry Kissinger, it’s revealed Richard Nixon’s former national security advisor has privately mused that he had played both sides so well that he would have been in the same role in the administration of Nixon’s rival, Hubert Humphrey. But Kissinger, real eminence grise, is perhaps a uniquely cross-dressing figure. For decades, the old adage about America’s two parties, that Democrats fall in love, and Republicans fall in line, seemed to hold inside the palace walls, as well.

For a court figure like James Baker, even a retired, ninety-year-old one, the prospect of not being an inside man appears to weigh heavily. That, at least, is what is revealed in a sprawling new biography from New York Times reporter Peter Baker (no relation to the former secretary of State) and his spouse, New Yorker correspondent Susan Glasser. They say he will vote for Trump.

Peter Baker likely knows better than most anyone of the breakdown in the currency of loyalty among Republicans.

He profiled Bush and Cheney in the best book on the duo, Days of Fire. Baker reported on how Cheney parlayed service to George H.W. Bush to the inner sanctum with George W. Bush— to co-president status, to the 43rd president’s critics. Baker says that’s mostly chatter, but what he profiled most was the lack of it: how Cheney’s relationship with Bush would largely collapse in the second term, with little notoriety. These were the days, the 2000s, in which feuds between friends were not aired in tweet, or when differing members of the same party didn’t routinely rebuke their rivals’ characters in leaked recordings, as of course Sasse recently did. House Minority Leader Kevin McCarthy, now one of Trump’s closest allies on the Hill, once said of the 45th president: “I think Putin pays” Trump. The impression has dogged the Trump White House. But Dick Cheney never said he thought George W. Bush lied America into Iraq.

In a 2008 dramatization of Baker’s integral role in the 2000 Florida recount — insiders generally say it was Baker who sealed the deal for Bush — Baker, played by Tom Wilkinson, recounts how he even got into politics. Once actually a Democrat, Wikinson’s Baker says “my wife passed away, cancer. … She was too young. A very close friend of mine, happened to be a Republican, was running for the Senate, and told me to come and work on his campaign to my mind off the grief. … He just didn’t want to see me sad all the time.” That’s a good friend, an aide shoots back. “Sure is,” Baker says, gesturing to a picture of the 41st president.

There is little to dispute such portrayals of history in this weighty new book. James Baker has had differences over the years with his party. But he has largely aired them privately. Far more than ideology, for men like Baker, it’s about power. But it’s also about friendship.

In power, the friends George H.W. Bush and Baker would come to view Israel, for instance, warily in a way their successors would not (namely, Cheney). This view was formed out of an impression of once-Israeli ambassador to the United States, Benjamin Netanyahu. Further, Baker and Glasser report that James Baker is still tortured by what he sees as the crucible mistake of recent Republican rule, the war in Iraq. But he never allowed that view let the doors of power to truly close on him. As Baker and Glasser write of Baker’s famous 2002 New York Times op-ed urging a more cautious route on Iraq: “If there were any hard feelings toward Baker in the White House, they did not last long. Shortly after the invasion, Bush began turning to him for special assignments.”

In those days, private, potentially controversial views far more rarely escaped filter. Those that did were the subject of absolute scandal.

Baker insists all he ever said was “Screw them, they don’t vote for us,” of a disagreement with the American Israel Public Affairs Committee, that was reported in far less sparing terms— and with different language. One can just imagine the tweets today, even the potential cancellation, of a revered statesman. “It was a political comment,” Baker told Baker and Glasser. “Not an anti-Semetic comment, not a slur.”

In the final judgement, Baker says his views on Trump are shaped largely by the need for sound, Republican management of the economy— and the imperative that the project of remaking the courts be continued. Baker flirted with Biden during his centrist triumph in the Democratic primary— only to see the former vice president move left during the general election. In the end, Trump’s signature domestic achievement has been a landmark tax cut. And Trump is about to install his third Supreme Court justice. In his twilight years, Baker might not have as many friends as he once did, especially in Washington. But for the retired man of state, the path forward — to his critics, that of raw power — shines brighter than ever.