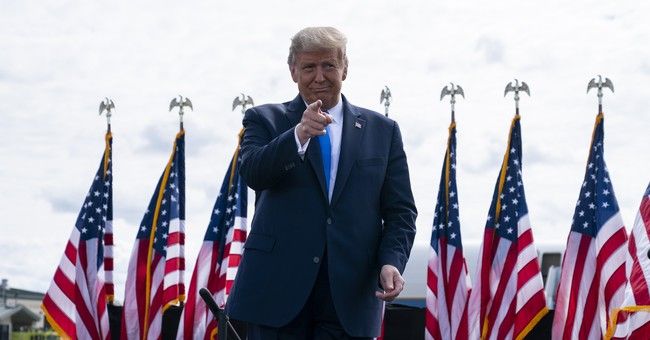 The bitter recriminations scheduled to begin on November 4 may start a little earlier than expected.

Seriously, though, there’s nothing in this Jonathan Swan report that’s all that surprising or damning. Trump campaign manager Bill Stepien is said to think defeat is likely (“It’s not a great feeling when you get the sense the campaign manager doesn’t deep down think we’re going to win”), but what else is he supposed to think right now? He knows how to read a poll. Still, none of Swan’s sources quote him as saying anything defeatist; the most they have on him is a bland metaphor about trying to land a plane amid heavy turbulence.

The paths to victory imagined by Stepien aren’t that far-fetched either if the race tightens a bit and if, as some expect, there are more surprise Trump voters waiting in the wings this time than there were last time.

The newsiest bit is simply the fact that internal fingerpointing has already begun, with all fingers ultimately pointing back at Trump. If he loses narrowly all partisan energies will be devoted to making the case that he was cheated at the polls somehow. But if he loses badly, much of that energy will be spent on intraparty bloodletting instead. Trump versus his campaign, Trump versus the Senate GOP, Always Trumpers versus Never Trumpers, on and on. Swan’s piece is an early warning that campaign aides will pin defeat on you-know-who.

“A lot of this is the president himself,” one adviser said. “You can’t heal a patient who doesn’t want to take the diagnosis.”…

Stepien’s defenders tell me the campaign sees several remaining paths to victory, and note that it’s hardly his fault when the president insists on actions like taking a joyride with the Secret Service while infected by COVID-19.

“In terms of really changing the trajectory of the race,” said one campaign source, “there’s only one person, from either side, who can do that. And that’s Trump.”

One interesting detail has to do with Stepien’s dilemma in how to spend Trump’s much-diminished war chest. Biden outraised him again last month, $383 million to $248 million, and had $180 million more in cash on hand than Trump did at the start of October. (To fully grasp how apocalyptic the Democrats’ money advantage is, including in Senate races, read this. The amounts look like typos where the decimal point is in the wrong place.) Now should be the moment for Team Trump to decide on what its likeliest path to victory is, go all-in on spending in those states to maximize Trump’s chances there, and give up on the states they don’t need.

But according to Swan’s sources, Stepien’s afraid to do that because the boss’s ego can’t cope with the reality that he’s unlikely to win certain battlegrounds this time that he won four years ago. So instead of gambling on a single path to 270 and spending big on it, Stepien’s spreading some money around to longshot states like Minnesota which aren’t even part of the paths to victory he’s imagined.

How can this campaign be so dysfunctional that Stepien can’t sit Trump down and explain to him that refusing to give up on Minnesota — or Wisconsin — makes it more likely that he’ll lose the presidency?

What path *does* Stepien see? Reportedly he’s telling aides that winning Georgia, Iowa, Florida, and Ohio will be the “easy part.” And you know what? I think he’s right. Trump will win those four. Iowa and Ohio were so red in 2016 that it’s hard to believe Biden can flip them now even though polling has them neck and neck. And if Biden does manage to flip one or both, it won’t matter; he’ll have wiped Trump out on the rest of the map. (Question: If winning Iowa is the easy part, why did Stepien have Trump hold an event there a few days ago?) Georgia was close-ish in 2016, tilting to Trump by five points, but everyone believes that a red southern state will ultimately stay with the incumbent. And Florida is Florida. Republicans have registered a bunch of new voters there and polling in recent cycles has consistently underestimated the GOP’s strength. It’s probably underestimating Trump again now. I’d bet on him there too.

But then things get hairy. According to Swan, Stepien sees these three paths for Trump to get to 270, in order of likelihood:

That last path is a long longshot because it would require Trump to flip a Hillary state from 2016 (Nevada) in an environment in which Biden has flipped three Trump states (Pennsylvania, Wisconsin, Arizona). That’s hard to grok, especially since Biden winning Arizona would probably mean he’s done well with Latinos, which would make nearby Nevada likely to stay blue.

The second path is a bit more likely, as Trump won all three of those states in 2016. But the numbers lately in Michigan are ugly. A new poll out today from The Hill/HarrisX has Biden up 11 there, and the Democrat is now above 50 percent in the RCP average. Even Trafalgar, Trump’s friendliest pollster, has the president hanging by a thread with a one-point lead. Arizona is gettable, as Biden leads by an average of just 4.0 points, and North Carolina is gettable, with Biden leading by just 2.7 points. But Michigan doesn’t look very gettable today at 7.2 points. And unlike in 2016, there’s a lot of high-quality polling happening there this year. Trafalgar would have to be right and a lot of skilled outfits would have to be not just wrong but wildly wrong to make the second path happen.

Which leaves the first path: Pennsylvania. It’s a little tighter than Michigan today, with Biden up 5.6 points on average. That’s probably too big of a margin to fully explain by a polling error, but if Trump can chip off a few points and make that a three-point race by Election Day, say? Sure, he’s got a shot.

So why doesn’t he cut the crap about Minnesota and Nevada and Wisconsin and Michigan and just go all-in on Pennsylvania with his remaining spending? Ride or die with PA. He’s going to have to come to terms eventually with losing a 2016 state or two, at a minimum, to Biden. Might as well do it now, when he can still benefit from it, than the day after the election.

Speaking of Trump allies being pessimistic about his chances, your exit quotation: “[Rupert] Murdoch, known for speaking freely among associates and family members, has said on several occasions he thinks Mr. Biden is likely to win the presidency, the person said. He has used the word ‘landslide’ in some instances.”