Savannah Guthrie Did Her Job for the Democrats

RUSH: Now, as to the actual events, one was the biggest softball event, and it was predicted, it was expected. That was Stephanopoulos and the way he soft-gloved Biden the whole time Biden was on. With Trump on NBC, Savannah Guthrie was under a lot of pressure. 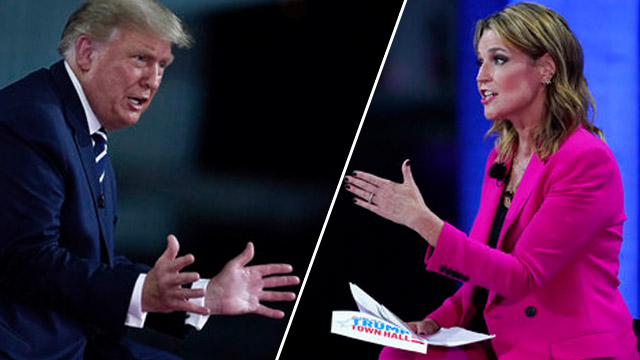 She was under a lot of pressure from NBC and from others in the Drive-By Media to destroy Trump because people in the media were livid that NBC did this in the first place. They were livid that they scheduled Trump for a town hall opposite Biden when Trump had canceled the debate. Trump canceled the second debate because he didn’t trust the debate commission. And, by the way, how did that turn out?

Here’s Steve Scully, who was, you know, the C-SPAN director of political content, whatever his title is. He goes out there, he just lies about his account on Twitter being hacked when he supposedly sent a question to Scaramucci. Gee, how do I handle this Trump guy? He said, I didn’t send that tweet. My account was hacked. 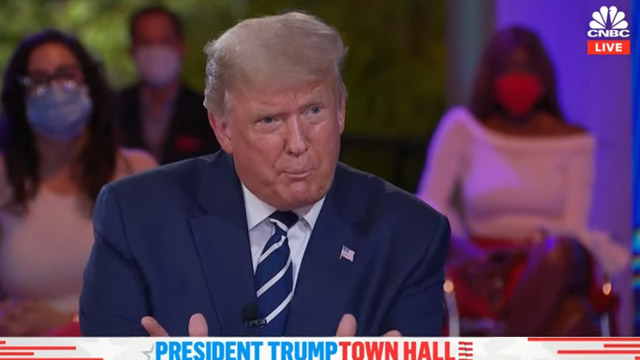 Well, it turns out it wasn’t and he lied about it. Now he’s been suspended. And Trump called that one; so he didn’t want any part of the debates because the debate commission is a fraud. It is not in any way, shape, manner, or form about fairness.

So Savannah Guthrie had a job. Her job was to do whatever she could to destroy Trump, to belittle him, to disrespect him, to not give him a chance to answer in any way, shape, manner, or form. To ask the most ridiculous questions. And she came through.

“Yes, but it seems so difficult for you, it seems so hard for you Mr. President, to denounce -”

Anyway, it ended up with a debate between Savannah Guthrie and Trump. Trump was much more prepared for this one than he was the first debate with Biden. I think here the moderator of the town hall — this is Savannah Guthrie — asked Trump 43 questions, interrupted left and right, and dominated the first 24 minutes. They had some voters on that also asked Trump questions, and it was amazing. Those were pretty qualified voters. They were pretty qualified, pretty informed.

I had no problem with the voters that NBC chose. But the New York Times even reported before the debate that she was under enormous pressure to make the night a nightmare for Trump because they were livid at NBC for giving him the forum in the first place. So they were gonna have to make Trump pay. And I don’t think she succeeded. I don’t think she made it a nightmare for Trump. I think that he shined. I think he came through with flying colors, given what he was up against. 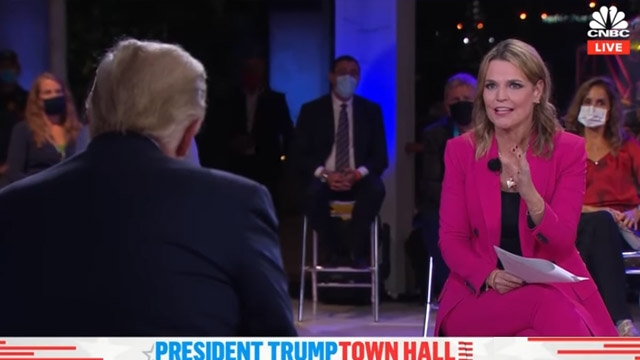 You know, you watch these things, you keep hoping, “Don’t lose your cool, Mr. President. Don’t take the bait, Mr. President. Don’t lose your composure. Sit there, maintain your posture, whatever your posture is at the outset of the show on that stool you’re sitting on, maintain that.” And he did. The voters who asked questions of Trump — they were good questions. They were well asked. Everybody on that NBC town hall looked great. The questions from Savannah Guthrie were embarrassing. They were just duds. She was a dud. It was obvious she was there for one reason, and that was to prove herself to her peers in the media.

But the actual town hall part of it was really good. The debate part, which there should not have been, but of course there was always going to be, the debate part with Savannah Guthrie, that was kind of nerve-wracking, and it’s frustrating, and it’s irritating.

“Mr. President, will you denounce QAnon?” He doesn’t know — you know, here’s the thing about Donald Trump that they know and they’re able to use this using their vernacular and their terminology, they’re able to entrap him. One thing Donald Trump will not do is criticize excessively — I mean, he won’t go overboard on it — anybody that likes him. I remember watching an interview he did with Charlie Kirk, Turning Point USA. And it was at the White House, and it was about a year ago. It was around Christmastime a year ago.

And they know this about him, and so they come up with these wacko groups here — this is the root of the Charlottesville business. The root of the Charlottesville lie that Trump said there are great people among the white supremacists and great people among whatever it is that they try to tar and feather him with, it’s rooted in the fact that Trump just has a — I don’t know if you call it loyalty or whatever. He just has problem being critical of groups that he’s not even heard of who he thinks support him.

So they think if they can get Trump to say that he don’t have a problem with QAnon they can get him to say that he supports child pedophilia rings out of a pizza shop in Washington. It’s just childish. It’s beneath everybody’s dignity here. But this is what Savannah Guthrie’s job was last night, to tar and feather and destroy Trump as best she could.

RUSH: Savannah Guthrie was also very, very weak… I’m sure this was a moment that she thought she was gonna destroy Trump. You know, these people all think that if they can somehow unearth some data about Trump’s finances, then they can eliminate him right then, that night. They are convinced that Trump is lying about his money, lying about his estate, lying about how he’s earned it.

And because of this, her most embarrassing moment of the night was when she started questioning Trump about his debt. Now, every year, Trump and other candidates’ outstanding financial liabilities or debts, they get reported in financial foreclosures that are publicly available for review. It’s part of politics. They can’t hide it. They don’t hide it.

It’s not something that she found that nobody else knows.

Every bank, every lender is explicitly listed in Trump’s disclosures — and this is the thing: None of them are Russian! They just can’t get beyond that. They have been convinced since before… You know, they wanted Trump’s tax returns and they wanted Trump’s financial records, ’cause they were convinced that those records and tax returns proved that Trump had ties with Putin.

That it was the Russians that were propping Trump up — and what his financial disclosure forms indicate is that most of Trump’s debt is handled by Deutsche Bank. So two days before this debate last night, the New York Times ran a story debunking the idea that Trump’s debt is a mystery. But she apparently missed the story. Trump has, I think, $400 million in debt.

And to a female journalist working on the Today show who might make — I don’t know what they make, four or five million a year, “$400 million! Wow, that — that is irresponsible! That’s unbelievable. That’s got to be a crime somewhere.” They don’t have any idea; $400 million in debt is not much when you own billions and billions and billions of dollars’ worth of real estate, as Trump kept trying to point out.

Trump kept saying, “They’re called ‘mortgages,’ Savannah.” They’re mortgages. It’s real estate. You might have one on your house, or your condo, or wherever you live. This kind of debt in Trump’s league is not evidence of crime. It’s not evidence of malfeasance. The New York Times did the story two days prior debunking this whole line of thought.

So that was a bomb-out. You know what was weak? She doesn’t know this stuff, and she’s a journalist. She’s got one of the most important gigs in American journalism, the Today show — and to be ignorant about how these kind of things work, and to have the ignorance rooted in hatred for the guy you’re talking to is even worse.