The man who was to have moderated a town hall-style debate tonight between President Trump and ex-VP Biden has been suspended from his job as C-SPAN’s political editor after admitting to lying about his Twitter account being hacked. The Associated Press reports:

C-SPAN suspended its political editor Steve Scully indefinitely Thursday after he admitted to lying about his Twitter feed being hacked when he was confronted about a questionable exchange with former Trump aide Anthony Scaramucci. 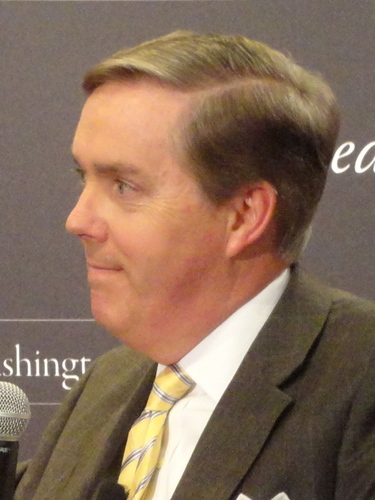 Scully had asked Trump-hater Scaramucci for advice on dealing with Trump’s criticism of him as a NeverTrumper. By lying and claiming that his account was hacked (the third time he made such a claim) Scully opened Pandora’s Box, with his employer, the Commission of Presidential Debates, and the FBI announcing investigations.  He likely concluded that his lie was going to be exposed and may have feared legal consequences if an FBI investigation came to that conclusion. It was the Commission on Presidential Debates that made the request to the FBI for an investigation, so it is not clear to me if Scully has any legal liability for filing a false report.

As a result, Scully will no longer moderate Washington Journal, C-SPAN’s morning show, nor will he host the network’s election night coverage.

I was right again! Steve Scully just admitted he was lying about his Twitter being hacked. The Debate was Rigged! He was suspended from @cspan indefinitely. The Trump Campaign was not treated fairly by the “Commission”. Did I show good instincts in being the first to know?

The incident is a huge black eye for the debate commission, whose Republican members have been characterized by no less than Bob Dole as anti-Trump, while noting that they are all his friends. That they would choose someone with a history of anti-Trump comments as moderator, and whose moral character is now shattered, does not speak well of their judgment.

Unsurprisingly, Scully is getting some sympathy, and I expect the mainstream media will be full of material characterizing Scully’s situation as a tragedy, a momentary lapse that is forcing him to pay an excessive price. The AP’s first take:

He said he let down his colleagues at C-SPAN, fellow news professionals and the debate commission. “I ask for their forgiveness as I try to move forward in a moment of reflection and disappointment in myself,” he said.

C-SPAN said Scully confessed to lying about the hack on Wednesday.

“He understands that he made a serious mistake,” the network said. “We were very saddened by this news and do not condone his actions.”

The debate commission did not immediately return a message seeking comment.

Scully has been at C-SPAN for about 30 years. Will he eventually be welcomed back, or will he find employment as a political operative, which appears to be his true calling?