The evidence establishing a shocking pattern is now clear: Hunter Biden and his busines partners sold access to Joe Biden when he was the Obama administration’s point man on China. This took place during the period when US jobs were being exported to China by the millions. Hunter earned many millions of dollars and funneled a share of that money to his father, in return for selling out American workers.

An entirely new source – a business partner of Hunter Biden who has “flipped” and granted full access (i.e., his username password) to years of his Gmail email account – reveals that access to then-VP Biden in the White House was granted in 2011 to a high level group of member of the Chinese Communist Party with a keen interest in US trade policy, as that policy was being formulated.

Breitbart has an exclusive story, co-authored by Peter Schweizer, who received access to the email trove of Bevan Cooney, formerly Hunter Biden’s partner in crime, and now serving time in federal prison for a fraud that he claims he was the fall guy for, taking the heat for Hunter.

Moreover, the MacBook hard drive emails have been authenticated by at least two people whose emails were found on it and who verify that the hard drive contains their true communications.

The long and detailed Breitbart article should be read in full to understand the magnitude of the email records. The 23,000 emails on it are still being reviewed, and more will be released in the days ahead. Here are few words of context from it:

From prison, Cooney provided Schweizer with written authorization, his email account name, and password to his Gmail account to retrieve these emails. He authorized, in writing, the publication of these emails— notable because it is the first time a close associate has publicly confirmed Hunter’s trading on his father’s influence.

The emails offer a unique window into just how the Biden universe conducted business during the Obama-Biden Administration. These associates sought to trade on Hunter Biden’s relationship with, and access to, his father and the Obama-Biden White House in order to generate business.

For instance, on November 5, 2011, one of Archer’s business contacts forwarded him an email teasing an opportunity to gain “potentially outstanding new clients” by helping to arrange White House meetings for a group of Chinese executives and government officials. The group was the China Entrepreneur Club (CEC) and the delegation included Chinese billionaires, Chinese Communist Party loyalists, and at least one “respected diplomat” from Beijing. Despite its benign name, CEC has been called “a second foreign ministry” for the People’s Republic of China—a communist government that closely controls most businesses in its country. CEC was established in 2006 by a group of businessmen and Chinese government diplomats.

The visit was logged in at the White House, but thegroup’s meeting with VP Biden was concealed. However, proof that it took place was found on the internet because a member of the group boasted about it:

Curiously, the Obama-Biden visitor logs do not mention any meeting with Vice President Joe Biden. But the Vice President’s off-the-books meeting was revealed by one of the core founders of the CEC. In an obscure document listing the CEC members’ biographies, CEC Secretary General Maggie Cheng alleges that she facilitated the CEC delegation meetings in Washington in 2011 and boasts of the Washington establishment figures that CEC met with. The first name she dropped was that of Vice President Joe Biden. 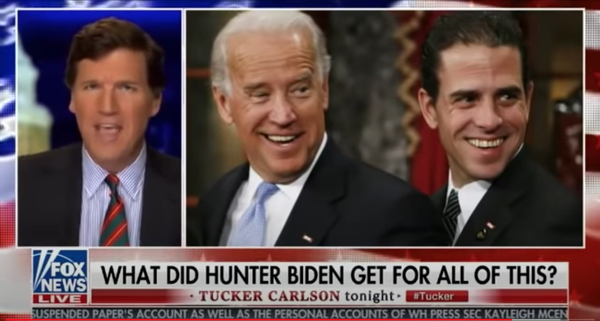 The relationships established during that visit may have benefited Hunter Biden and Devon Archer down the road. Two years later, they famously helped to form the Chinese government funded Bohai Harvest RST (BHR) investment fund. One of BHR’s first major portfolio investments was a ride-sharing company like Uber called Didi Dache—now called Didi Chuxing Technology Co. That company is closely connected to Liu Chuanzhi, the chairman of the China Entrepreneur Club (CEC) and the founder of Legend Holdings—the parent company of Lenovo, one of the world’s largest computer companies. Liu is a former Chinese Communist Party delegate and was a leader of the 2011 CEC delegation to the White House. His daughter was the President of Didi.

On his Fox News program last night – the highest rated program on cable news – Tucker Carlson provided an excellent summary of the meaning of all this.

And in the hour that followed, on Hannity, Peter Schweizer himself explained how the pay-to-play system worked. Key excerpt:

A wide net of using the Biden name, using access to the White House, Hunter serving a pipeline to the administration as a means to help their clients and gain clients. The names that come up in this are the Chinese, the Russians, the Ukrainians, the Kazakhs – it’s a veritable United Nations of corruption, and what it demonstrates is that Joe Biden as Vice President of the United States of America was a center point —  it was almost the planet around which these business activities moved.

President Trump is already speaking about the “Biden Crime Family” in his campaign rallies, and will share a stage with Biden in the scheduled debate moderated by NBC’s Kristen Welker. More and more evidence will be coming out each day, and quite notably, Biden and his lawyers are not contesting the veracity of the emails from Hunter’s MacBook and they have not yet been asked about the Cooney email account, which is readily verifiable.

The social media cofferdam around distribution of the stories of Biden corruption will not hold. Not only does the Streisand effect serve as an impetus, but the week and half left before the election are focusing the nation’s attention on Joe Biden and Donald Trump.