Biden responds viciously when asked about the Hunter Biden revelations 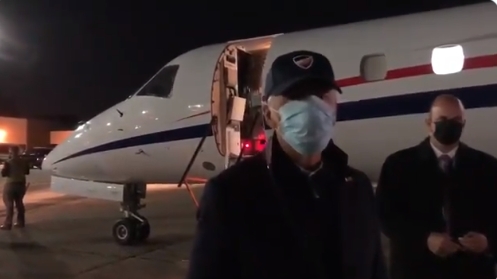 It was disgraceful that, during ABC’s “faux” townhall, George Stephanopoulos did not ask Joe Biden about the contents of the computer that Hunter Biden abandoned at a repair shop. When CBS News’s Bo Erickson dared to ask Biden that question, Biden didn’t even attempt an answer. He lashed out angrily at Erickson for daring to ask the question.

Erickson posed the question while Biden was preparing to board a gas-guzzling private jet. Speaking respectfully, he said, “Mr. Biden, what is your response to the New York Post story about your son, sir?”

Biden instantly went on the attack:

I know you’d ask it. I have no response. It’s another smear campaign. Right up your alley. Those are the questions you always ask.

I asked Joe Biden: What is your response to the NYPost story about your son, sir?

He called it a “smear campaign” and then went after me. “I know you’d ask it. I have no response, it’s another smear campaign, right up your alley, those are the questions you always ask.” pic.twitter.com/Eo6VD4TqxD

The only things Biden forgot to do were to call Erickson “fat” and either challenge him to a push-up contest or offer to take him behind the airplane and beat the crap out of him.

Biden’s problem, of course, is that there are no answers to that question because the facts are damning. There’s no longer any question about the documents’ veracity. The computer belonged to Hunter, and the documents on it tell a sordid tale.

Regarding Ukraine, in early 2014, not long after Hunter joined Burisma’s board, despite lacking any qualifications, he received an email from Vadym Pozharskyi, a top Burisma executive, asking Hunter for “advice on how you could use your influence” for Burisma. A year later, Porzharskyi wrote Hunter a note in which, among other things, he thanked Hunter for “giving [him] an opportunity to meet with your father and spend some time together.”

The relationship between Burisma and the Obama-Biden administration flourished. In December 2015, the Obama administration let a Democrat public relations firm working with Burisma participate in a conference call regarding Biden’s upcoming visit to Ukraine as the administration’s point man. After the meeting, the p.r. firm sent an email with the conference minutes to Porzharskyi, Hunter, and Hunter’s partner, Devon Archer (the nephew of Whitey Bulger, the crime boss).

A short time later, Biden went to Ukraine. While there, he threatened to withhold a billion dollars in foreign aid unless the Ukrainian administration fired Victor Shokin, a prosecutor investigating Burisma. We know about Shokin’s firing at Biden’s behest because Biden proudly boasted about it.

The hard drive also revealed that Hunter was negotiating with Chinese energy companies closely affiliated with the Communist Chinese Party. These deals were eventually worth over $1 billion. Some of the documents showed Biden allocating assets between interested parties, including “10 held by H for the big guy?” Fox News says that sources have confirmed that the “big guy” is Biden himself. Certainly, while Biden was taking the lead on China, the Obama administration gave it a free hand to militarize man-made islands in the South China Sea, while doing nothing to stop its economic depredations against America or the endless flow of fentanyl into American cities.

Of the information that’s been released, there’s another sign that Biden was on the take. In a text message to his daughter, Hunter says that she’s lucky that he, unlike her grandfather (that is, Biden, whom Hunter calls “Pop”), won’t demand 50% of everything she earns:

The photo below is a screenshot of a text message from Hunter Biden to his daughter, Naomi Biden, on January 3, 2019.

This describes the amount kicked back to the Boss, Joe Biden, as happens in every organized crime group.

Ultimately, after reviewing the documents, Hunter Biden emerges not only as a sleazy and corrupt character but also as a pathetic one. Although he was active in all these grifts, it was his father who set up the contacts, apparently in exchange for 50% of the take. Hunter ends up looking like a damaged child pimped out by an avaricious parent who manipulates his son through love, guilt, and greed.

No wonder Biden’s only recourse in the face of an actual question is attack and denial. With the computer verified and the documents pouring out, Biden is a trapped rat, finally facing a very big, angry cat.