Seattle: At least 118 police officer have left the department this year, mayor receiving a stream of threats 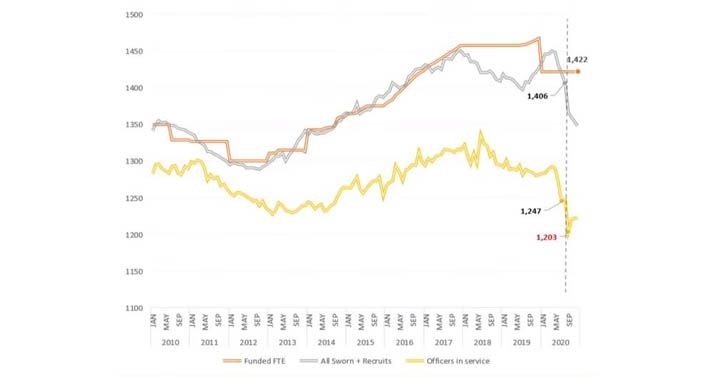 On Friday the Seattle Budget Office published a report revealing that a record number of police officers left the force in September. The attrition through resignation and retirement brings current staffing down to levels not seen in 20 years.

A record number of Seattle police officers left the department in September, double the highest of any month on record, and a level of attrition that the city’s mayor calls “unprecedented.”

On top of that, the report says the city could find itself at police staffing levels on par with the early 1990s, even though the city’s population has grown by 44% since then.

The report says 39 officers or officers in training “separated” from SPD in September, while another 14 officers were on extended leave. Per the report, that means the number of officers decreased from 1,247 to 1,203 in a single month.

Last month was the peak of this trend but in all there have been 118 separations from the force this year, most of those since the push to defund the police:

At least 118 officers have separated from the force in 2020, with the bulk leaving after the Seattle City Council embraced radical activists pushing to defund the police. Separations are all-inclusive, including resignations (including lateral-moves to other agencies) and retirements…

The mass exodus of officers started in May with 10 separations, followed by 16 in June, 10 in July, and 14 in August. In September, that number jumped to 39. So far in October, there have been eight separations according to a source, though this is not in the mayor’s report. Police Chief Carmen Best, who resigned this year, is included in the statistics.

Can you blame them? Seattle officers have been seriously injured by “protesters” who police say are clearly filled with hate and eager to be destructive. Some officers have just given up. Even apart from the physical injuries, there’s the constant stream of abuse they have to deal with from “activists.” How much of this would you put up with at your job?

Sometime earlier at Cal Anderson Park, officers are being pushed to their limits in an attempt to spark violence from the police. This is psychological warfare against our police. #Seattle pic.twitter.com/lUbgzwX5G7

The low staffing levels create real world problems for everyone living in the area including slower response times to 911 calls.

Currently, due to low staff, the median priority 1 response times — that is, dangerous, in-progress crimes that demand immediate response — was an astounding nine minutes in the North Precinct from July through September, according to city documents.

“These are historically low staffing levels,” she said, adding her data shows people are most concerned with car prowls and a lack of police capacity to respond to 911 calls. “Carmen Best was the best thing that happened to the city.”

She said the council’s attempts to cut funding chased Best away.

There’s a real possibility things will continue to get much worse thanks to a city council that is still eager to defund the police. Mayor Jenny Durkan tried to limit the cuts to the police by vetoing the city council’s budget proposal, but the council voted to override that veto. That decision has already had disastrous consequences for the city which currently has no teams to deal with problems created by homeless camps. In one case, the homeless have set up a “metal shop” that runs a generator and grinders late at night next to a group of apartment buildings but the city says it has no staff who can do anything about it. And that may not change until next year some time.

In addition to threatening messages outside her home, Durkan’s staff have seen an increase in threats and hateful messages via her email, swatting, social media, the mayor’s office voicemail and letters, including death threats…Several messages are serious enough to warrant additional investigation, according to police…

As a former U.S. attorney, Durkan’s home address had been kept confidential until Seattle City Councilmember Kshama Sawant marched with a group of demonstrators to Durkan’s doorstep this summer.

Here’s the kind of thing that fans of socialist councilmember Kshama Sawant have been leaving at Durkan’s house:

Someone just shared this screen shot with me from my former colleague. This is not merely “uncivilized”. It is misogynistic and laced with gender-based threats at YOUR HOME. It is wrong. We can disagree without demoralizing each other. This movement demands that of us. pic.twitter.com/XC2DITTX1W

Rioters forced the Mayor of Portland to move out of his home last month. Now they seem to be trying to do the same to Seattle’s Mayor Durkan. Frankly, it’s hard to have much sympathy because Durkan encouraged these “activists.” When CHAZ was set up she called it a block party and suggested it might lead to a summer of love. She took their side and ranted about President Trump. Now she’s been labeled a “Nazi” by the same crowd of extremists. The whole city, not just the mayor, is paying a price for her unwillingness to stand up to extremism.