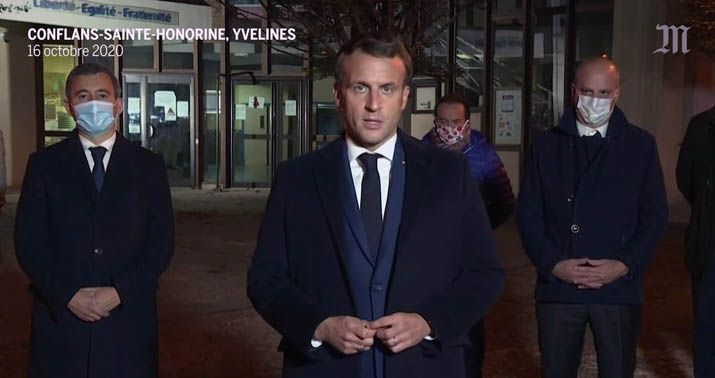 Here we go again. A high-school teacher in a Paris suburb was beheaded Friday. Police were called in around 5 pm local time and quickly located the suspect. The following is auto-translated from Le Monde newspaper:

Police officers from the anti-crime squad were called in for a suspicious individual prowling the scene. There, they discovered the victim, a history and geography teacher at the school.

After discovering the body, the police tried to arrest a man who threatened them with a knife in the nearby town of Eragny, and shot him. The man reportedly shouted “Allah Akbar! “ Before being shot. His death was confirmed to the World by a judicial source. A security perimeter was installed and the demining service called, due to a suspicion of an explosive vest.

Police quickly identified a possible motive for the attack. The teacher had recently taught a lesson on freedom of expression during which he showed students one or more of the Charlie Hebdo cartoons:

The victim, a teacher of history and geography, had been talking in class about freedom of expression in connection with the Muhammad cartoons, which caused uproar among some Muslims when Charlie Hebdo published them.

Earlier this month, some Muslim parents complained to the school about the teacher’s decision to use one or more of the cartoons as part of a discussion about the Charlie Hebdo trial, French media report.

There has already been a claim of responsibility on Twitter but police still don’t know if the person who tweeted it is the person they shot today:

A message claiming responsibility for the attack was posted on a Twitter account on Friday night minutes after the tragedy. This account had, according to a judicial source in Le Monde , a kunya (Muslim nickname) of someone claiming to be Chechen.

At this stage, however, investigators are not yet able to say whether he was sent by the young man killed by the police. The published message was addressed to “Macron, the leader of the infidels” , before continuing: “I executed one of your hell dogs, who dared to belittle Mohammad”.

Tonight, President Macron visited the school where the victim taught and defended freedom of expression:

“One of our compatriots was murdered today because he was teaching pupils about freedom of expression, the freedom to believe or not believe,” Mr Macron said.

“Our compatriot was flagrantly attacked, was the victim of an Islamist terrorist attack… They won’t win… We will act. Firmly, And quickly. You can count on my determination.”

Minutes later he tweeted the short phrase “Ils ne passeront pas”, meaning: “They will not pass.”

At the beginning of September, 14 people charged with providing aid and support to the killers in the deadly 2015 attack on Charlie Hebdo’s offices were put on trial. To mark the moment, Charlie Hebdo republished the cartoons which it hadn’t published since the attack. The head of Charlie Hebdo’s HR department had to quickly abandon her apartment last month after receiving credible threats. A few days later there was a knife attack near the tabloid’s offices. In short, Islamic extremists have once again been stirred up by some cartoons and, as of today, are once again killing people in Paris over them.