This week in baseball history: Brooks, Orioles put ’69 Series behind them 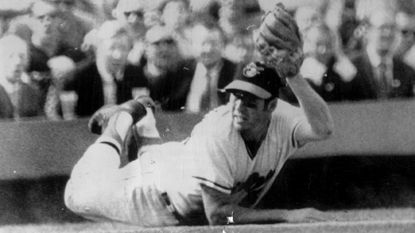 In 1970, baseball’s post-season consisted of a best of five playoff series in both leagues plus the World Series. Thus, the minimum number of post-season games was ten.

The 1970 playoffs were completed in one game over that minimum number. The Baltimore Orioles, smarting from their upset loss to the New York Mets in the 1969 World Series, swept aside the Minnesota Twins in three straight. The combined score of the three games was 27-10.

In the National League, the Cincinnati Reds swept the Pittsburgh Pirates. However, this was a tighter series.

The Reds needed ten innings to win the opener. Gary Nolan and Doc Ellis pitched nine shutout innings each. Cincinnati scored three runs in the tenth. The key hits were a triple by Ty Cline (pinch hitting for Nolan), a single by Pete Rose, and a triple by Lee May.

Clay Carroll pitched a perfect bottom of the tenth to seal the win.

The next two games were also tight. Cincinnati won them 3-1 and 3-2. Although the Reds were known for their hitting (“the Big Red Machine”), they featured strong pitching, too, and it was the pitchers (especially Nolan, Carroll, Don Gullett, Milt Wilcox, and Jim Merritt) who saw them through the NLCS.

The sweeps by the Baltimore and Cincinnati set up what looked like a dream World Series. The Orioles were a team for the ages. They had followed their 109 win season in 1969 with a 108 win season in ’70 (ten more games than the Twins won that year). The pitching staff featured three 20 game winners — Dave McNally, Mike Cuellar (24 wins each) and Jim Palmer (20). The staff boasted the lowest ERA in the American League. Their hitters led the League in runs scored.

Cincinnati won 102 games in 1970, two more than the Mets had won the previous year. The lineup contained four .300 hitters — Rose, Tony Perez, Bobby Tolan, Bernie Carbo — plus Johnny Bench who batted .293 and led the League in home runs and RBIs. It also included Lee May with his 34 home runs.

When betting on the Series began, the oddsmakers had it even. Heavy betting on the Orioles forced them to make the Birds the 11-10 favorites. They deserved to be favored, but the tight odds were a fair reflection of a pretty evenly matched Series.

Unfortunately for the neutral observer, the Orioles won the Series in five games. To be honest, I remember only three things about the 1970 Series — Elrod Hendricks’ phantom tag of Bernie Carbo at home plate, Dave McNally’s grand slam home run, and a succession of great defensive plays by Brooks Robinson. Everything else that follows in this post is from accounts.

The first two games, both won by Baltimore, were close. In Game One, the Reds jumped out to a 3-0 lead against Jim Palmer. A two run homer by Lee May gave them that lead in the third inning.

Baltimore battled back to tie the game by the fifth inning. A two-run homer by Boog Powell in the fourth and a solo shot by Elrod Hendricks did the deed.

The Reds should have taken the lead in the bottom of the sixth. With one out, Carbo walked and took third on a single by Tommy Helms. Carbo then tried to score on a slow roller in front of the plate by Cline. Elrod Hendricks fielded the ball and tagged Carbo before he reached the plate, but the glove with which he made the tag was empty. The ball was in his other hand.

However, home plate umpire Ken Burkhart didn’t see this. He couldn’t. Hendricks had accidentally bumped into him and Burkhart had his back to the play. Instead of asking for help, Burkhart called Carbo out.

In the top of the next inning, Brooks Robinson gave the Orioles the lead with a solo home run off of Nolan. Palmer made it stand, although he needed Pete Richert to get the last out.

The Reds took an even bigger lead early in Game 2. They led 4-0 after three innings. However, the Orioles got a run back in the fourth and then scored five in the fifth.

Baltimore went on to win 6-5. Tom Phoebus got the win in relief of Cuellar. Wilcox took the loss in relief of Jim McGlothlin.

The Orioles cruised to victory in Game 3 behind McNally, 9-3. McNally also contributed that grand slam home run, the only one ever by a pitcher in the World Series.

The Reds staved off elimination with a 6-5 victory in Game 4. They accomplished this by scoring three runs in the eighth inning. All three runs scored on a Lee May home run off of Eddie Watt.

Game 5 was no contest. The Reds scored three times in the top of the first inning off of Cuellar. But the Orioles countered with two runs in each of the first three innings to take a 6-3 lead.

The word on Cuellar was always that you needed to put him away early. If you didn’t, he would settle down and beat you.

This was the case in Game 5. The Reds never scored after the first inning. They managed only two hits and a walk off of Cuellar in the next eight frames. Baltimore coasted to a 9-3 win. They were world champions for the second time in their history.

Brooks Robinson, who had come up short repeatedly in the clutch against the Mets in ’69, was the Series MVP hands down. He batted .429 (9 for 21) with two doubles and two home runs. His six RBIs led the Orioles (though Lee May had eight for the Reds). His homer gave the O’s their victory in Game One.

However, it was in the field that Robinson staked his claim for baseball immortality. Dan Connolly of The Athletic describes Robinson’s great plays as follows:

May, a slugging pull hitter who had already singled and homered against Palmer, leads off the inning. He knocks a changeup down the line and Robinson backhands it while crossing into foul territory. In one motion, he whirls and throws a one-bouncer to Powell to get the slow-footed May by a step. It’s considered his greatest World Series play and one of the best ever.

(50 years later, the always modest Brooksie says “the only reason I got him then is that he ran like me.”)

May hits a scorching liner that short-hops Robinson and is almost behind him, but he contains it and starts a 5-4-3 double play to get the Orioles out of the inning and keep the club within three runs.

(Robinson 50 years later: “Heck, I don’t make that play twice a year like that. In other words, it was a strange World Series. Once in a lifetime, believe me.”)

It’s considered maybe Robinson’s fourth-best play of the Series, but it may be the most important. The Reds are desperate, down 2-0 in the Series and are now playing in a hostile environment in Baltimore. They need to get off to a fast start and Rose provides hope with a leadoff single against McNally.

Tolan then drops a perfect bunt that Robinson thought was heading foul but stops in fair territory. With runners at first and second, Pérez clocks a ball that Robinson fields by his left shoulder. On the move, he steps on third for the force. Then he fires a rocket to Powell at first to get Pérez for the double play. Bench follows with a hard liner right at Robinson. He drops to a knee, catches the ball and then jogs off the field, single-handedly thwarting the Reds’ scoring opportunity.

It may be second fiddle to Robinson’s play against May in Game One, but the photo of this moment is the most iconic of the 1970 World Series. Robinson sprawled in the dirt, left knee and right elbow on the ground, right leg slightly raised and left arm held high above his head, ball resting in his glove. Bench smokes a liner to Robinson’s left that he somehow corrals on a dive. Robinson then famously lifts his glove for the umpires — and the world — to see.

(Robinson 50 years later: “It just kind of curved back at me. . .He got out in front and he hit a bullet and I just took one step and a dive.”)

Robinson had one more highlight play in him. Of course, it comes against Bench, who hits another ball down the line and Robinson dives into foul territory for the catch. And the exclamation point.

(Gary Nolan 50 years later: “There wasn’t a whole lot being said in our dugout. It was kind of like disbelief. It was kind of like you were sitting there with your tongue hanging out, saying, ‘What the hell?’ You can’t hit anything down there because everything you hit he catches. I think the word I would use more than anything was just disbelief.”)

As noted above, Lee May was the hitting star for Cincinnati. He went 7 for 18 with 8 RBIs. But for Robinson’s defensive gems, May would have hit .500 or better.

In 1975, May was traded to the Orioles. Brooks recalls: “The first thing he said to me was, ‘Robinson, no one would have ever heard of your ass if I hadn’t hit those balls to you.’ We laughed. He was a great guy.”

So is Brooks Robinson. And one of the very best defensive players and all around third basemen in baseball history, with or without the 1970 World Series.