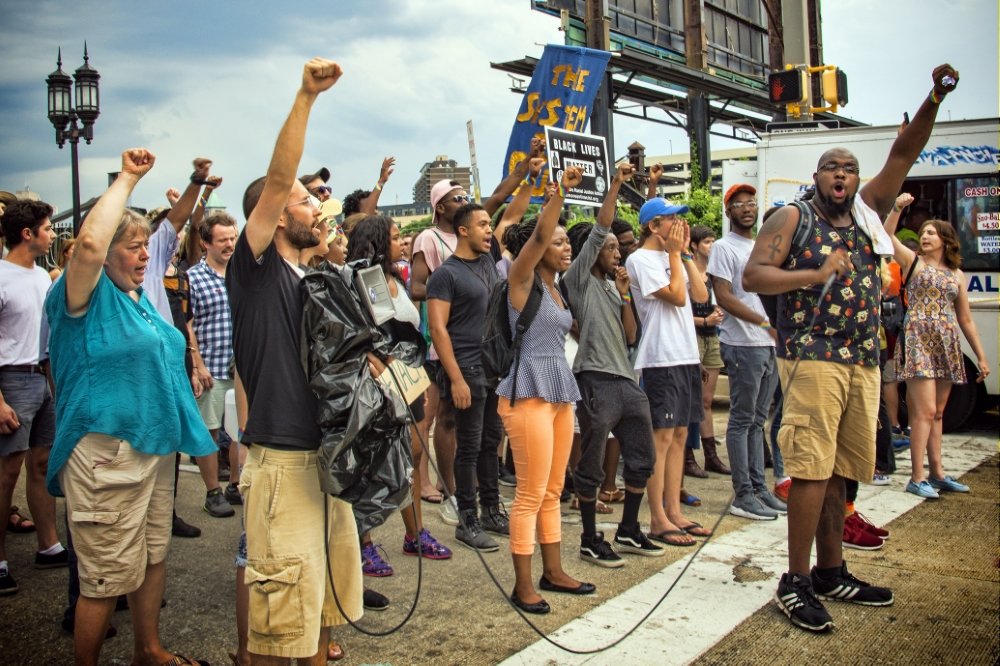 That America is a racist country is the great self-evident truth of the left and of the ruling class whose moral opinions are shaped by it. This truth is self-evident in the sense of being readily apparent to them, as evidenced by the countless disparities in life outcomes between blacks and whites. No explanation for these disparities is ever required. Their mere existence is proof of racism.

The disparities between Asians and whites, between Indians and whites, and between Nigerian immigrants and whites all go studiously ignored since these groups generally outperform whites in income and educational attainment. Also ignored is the role that the pathologies of inner-city black culture — fatherlessness, crime, nihilistic alienation, and the exaltation of thuggery — play in producing and sustaining disparities.

America’s racist nature is also self-evident in the philosophical sense. It is an axiomatic truth: the predicate (racism) is contained in the subject (America). In the same way that all bachelors are, by definition, single, so is America, by definition, racist.

Formulated as such, the self-evident truth of American racism cannot be refuted. It is impervious to counterarguments, data, and historical developments. Believers in American racism don’t care about your facts. In 1991, Derrick Bell, one of the founders of critical race theory, declared that blacks had made no progress in America since 1865. He made this claim with a straight face at Harvard University, where he had been a tenured professor for two decades. In 1865, Harvard did not admit black students.

In 2020, the claim that America is fundamentally racist is a lie. But it is a lie tenaciously defended by those on the left who most benefit from it: the Democratic Party, its progressive allies in the academy, the intelligentsia and the media, and black political leadership. As the ultimate arbiters of all racial controversies, the left have positioned themselves to occupy the moral high ground in America — the most important strategic position in any political conflict.

Using Racism as a Smokescreen

The accusation of racism is their most powerful political weapon. Playing the race card allows them to detract attention from their own corruption and the radical ideas they espouse. Whatever faults they have, at least they’re not racists like Donald Trump, the Republicans, and their base of deplorables. The right is thus constrained to fight the enemy on the enemy’s own terms. Republican claims that “Democrats are the real racists” inevitably fall flat.

The national obsession with racism is also obviously beneficial to those who work in the diversity and grievance industries. It is perhaps most useful for corporate and financial elites, who use it to distract Americans and direct their ire away from urban oligarchs like themselves toward the nebulous forces of racism. Corporate America is afraid of socialism, not of Black Lives Matter. The anti-capitalists hate the rich and corporations. The anti-racists do not; they can readily be bought off with performative wokeness and a sprinkling of diversity hires in the C-Suite.

Well-intentioned Americans of all races must understand that these powerful constituencies have a vested interest in keeping America “racist” forever. No set of attainable conditions would ever lead them to admit that America is no longer racist. No sooner would the reparations checks be issued than new demands would arise.

None of this is to deny that America was racist for centuries, that the legacy of racism is still with us, and that some racism endures to this day. But the Constitution of the United States is colorblind, and America’s Declaration of Independence proclaims that “all men are created equal.” There are no racist laws or regulations on the books anywhere in America — not at the federal level, not in any of the 50 states, and not in any of the 19,502 incorporated cities, towns, and villages.

The Actual Reality of ‘Racist’ Police

Since 1964, America has also had a Civil Rights Act that prohibits discrimination on the basis of race in both the public and private sectors. In explicit violation of the legislative history and text of the law, the act has been interpreted by the highest court of the land to countenance so-called “affirmative action,” i.e. racial preferences to benefit blacks (and to a lesser extent, Hispanics). America thus finds itself in the paradoxical position of being a purportedly white supremacist nation that officially sanctions and practices discrimination against whites.

Well, a critic might say, the laws may not be racist, but don’t police enforce them in a racist way? The overpublicized deaths of George Floyd, Rayshard Brooks, James Blake, and others before them supposedly prove that a “legalized genocide of colored people” is taking place.

Yet none of the major studies of lethal shootings by police officers find evidence of racial bias. In fact, controlling for the very high black crime rate — African-Americans make up 13 percent of the population but commit more than 50 percent of homicides and about 60 percent of robberies — and the higher rate at which black suspects resist arrest, the share of blacks killed by cops is lower than one would expect.

Somehow, America remains a racist country even as elected officials in both parties openly pander to racial minorities, blacks in particular, while paying no attention to whites as a group. The Republican Party studiously ignores whites, busy as it is courting the “naturally conservative” Hispanic vote, while the Democratic Party increasingly adopts the anti-white animus of Black Lives Matter and the rest of the woke left. Because the demand for racism so completely outstrips the actual supply, we are left with unfalsifiable accusations of “dog-whistling” — non-racist statements that supposedly send covert racist messages.

Once every few years, it is true, a Republican will put his foot in his mouth and speak indelicately about race. Whenever this happens, the offender is universally condemned, with the loudest denunciations coming from the Republican Party and the conservative establishment, and the offender promptly apologizes. Such is the odd nature of “systemic” American racism, that racists are immediately denounced and eager to repent.

African-Americans occupy a larger place in the country’s collective imagination than any other group. They exert enormous cultural influence not just in America, but across the globe. At home, no group is more honored for its accomplishments, real or fake (no, a black man did not invent the lightbulb). The closest thing America has to a secular saint is Martin Luther King, Jr. Even the recent allegations that he may have been a serial philanderer who laughed as a woman was raped in front of him did not dent his reputation.

In the public square, at school, and at work, Americans are also increasingly compelled to profess devotion to the creed of Anti-Racism. The thought police are everywhere. No one gets canceled for abandoning their children, betraying the country, or committing any number of immoral, indecent, or criminal acts. There is only one unforgivable sin: to deviate from the accepted script when speaking of African-Americans — and to a lesser extent, any of the other protected identity groups.

Amid widespread sympathy for blacks, affirmative action policies, and the absence of racist laws, we are told that racism is nonetheless institutionalized — though there are no institutions of any significance in America committed to racism, let alone to white supremacy.

The Southern Poverty Law Center, an alarmist fundraising machine for its now disgraced founder Morris Dees, keeps track of about 940 hate groups operating within our borders (more than a quarter of which are black separatists). By focusing on the number of groups, the SPLC can ignore their insignificant size, lack of funds, and complete marginalization in American life.

By the SPLC’s count, there are 47 Ku Klux Klan groups in America — but their total membership is between 5,000 and 8,000 (the Anti-Defamation League puts the total at 3,000). At its peak in the mid-1920s, the Klan had 6 million members (in a country with a third of our current population).

So much for the institutions of hate. Meanwhile, corporate America, the media, Hollywood, professional sports, philanthropic foundations, nonprofits, churches, the academy, the arts, and the military all vociferously denounce racism. All eagerly embrace the diversity agenda. All are obsessed with hiring and promoting people of color.

The Mind is the Last Frontier

And this brings us to perhaps the strangest feature of America’s purportedly racist society: the growing phenomenon of whites passing as nonwhites. Elizabeth Warren claims to be Cherokee, BLM’s Shaun King claims to be biracial, and a Jewish professor of African history at George Washington University is the new Rachel Dolezal. Needless to say, no Afrikaner ever pretended to be “colored” under apartheid.

Where, then, is racism to be found in America, if it is not in its law, its public rhetoric, and its institutions? Polls make it hard to find, too. Eighty-seven percent of Americans approve of black-white marriage, up from 4 percent in 1954. Gallup calls it “one of the largest shifts of public opinion in Gallup history.” When researchers asked teenagers to name the most famous Americans in history (excluding presidents), their top three picks were MLK, Rosa Parks, and Harriet Tubman.

The last frontier is now the subconscious. Because the quantity of racism is held to be constant throughout American history, the absence of racist sentiments in people can only mean that racism is hiding deep in the recesses of their minds.

With the help of Harvard University’s widely touted Implicit Association Test, everyone’s latent racism can now be brought to the fore. The test, of course, reveals no such thing. A peer-reviewed study found “little evidence to support [its] more provocative claim: that people possess unconscious racist attitudes.” Even Vox had to admit that “it might not work at all.”

In the end, all we are left with as the definitive proof of American racism today is “systemic racism,” the meaning of which boils down to: America is racist because, well, it just is. Racism somehow suffuses the whole even though it is not visible in any of its major parts. Whereas all other racist regimes in history openly proclaimed their racism, America has pulled off the amazing feat of purging its laws, institutions, and culture of racism — all in the interest, of course, of perpetuating racism.

Republished from RealClearPublicAffairs, with permission.