Mexican restaurant in Iowa: “No Love, No Tacos” 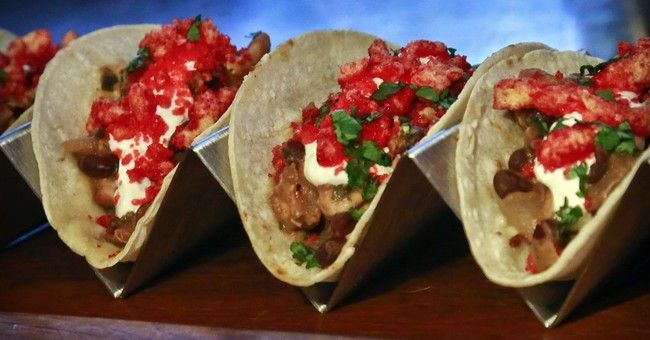 A politically active small business owner in Iowa finds himself in a kerfuffle over the overtly liberal politicization of his Mexican restaurant. Alfonso Medina is a Democrat and his restaurant is well-known for its burritos in Marshalltown, Iowa. The Food Network named its “California Burrito” one of the best in the United States.

Some local residents of the small town take offense with a sign Medina placed in front of his restaurant in August. Medina wants to show how woke he is about equality and social justice so his sign includes everyone. A small-ish yard sign with multi-colored lettering reads: “We Believe: Black Lives Matter, No Human is Illegal, Love is Love, Women’s Rights are Human Rights, Science is Real, Water is Life, Injustice Anywhere is a Threat to Justice Everywhere.” The only affirmation missing is one for the unborn but that doesn’t fit the smug liberal narrative, does it?

Some customers have begun to complain about political correctness and political messages at a food establishment. Naturally, the disagreement finds its way to social media. “I didn’t think there was anything bad”, Medina said. His wife, however, told him he was brave to put up the sign. I can only assume that this is a story that is just now being published because the election is such a short time away.

Not long after, his social media feed lit up with criticism about the sign and he even received a few letters. But one such letter caught his attention. It was typed with no return address or signature.

To Medina, it was clear the letter came from a customer. They addressed him by name and accused him of caving in to political correctness, but they also called him “a leftist Marxist.”

Whoever wrote the letter said they only saw the sign after leaving the restaurant, spending more than $100 and leaving a “generous tip.”

The letter also has a handwritten part expressing disappointment La Carreta decided to display a sign “that insults and disrespects Christianity and America.”

Medina says he takes everything in stride. He addressed his customer’s complaint by publishing the letter on his Instagram account. His reply to the letter reads:” We’re just trynna change the world with good food, drinks and a few standing up for what we believe in just like Anglo owned companies do. If others have the right to be vocal, so do we. We’re sorry your burrito had to get political, but it was the only way y’all would listen. We don’t even do it for financial gain If anything. Business is booming😎 No love, no tacos.”

His Facebook his message was a bit different and some of it was in Spanish.

On Facebook, he wrote that he was not upset or afraid. He said he stood by his sign and the letters only encourage him to keep going. “Si ladran es porque vamos avanzando,” he wrote, meaning “If they bark, it signifies we are advancing.”

Then he put up another sign, a bigger sign that reads “No Love, No Tacos” and quickly copyrighted the slogan. Guess who’s making money off it now with t-shirt sales and other branded merchandise? Yes, that would be Alfonso Medina. He is contributing to a scholarship fund for a local community college.

He essentially says, if customers don’t like his political messages, they can eat somewhere else. That’s an odd message for such a savvy businessman to deliver.

“I am someone who takes something negative and tries to turn it into something 10 times more positive,” he said. “If they don’t want us, they should align their ideals and their comments with the food they eat.”

Medina’s political activism and his restaurant made news during the Democrat primary because some candidates used the restaurant as a campaign stop, including Beto O’Rourke, Julian Castro, Pete Buttigieg, and Tom Steyer. Medina supported Castro and was disappointed when he dropped out before the Iowa caucus. His restaurant is popular and the majority of his customers are white. About 30% of the town’s 26,666 residents are Hispanic. He is moving forward in his political activity. He created a new website to advocate for making Election Day a national holiday. He will close his restaurant that day and pay his employees for the day. He says he will volunteer at the polls.

It will be interesting to see if his business is affected by all this. Lots of businesses find that “get woke, go broke” rings true with decreases in sales but that may not happen here. He’s obviously known for hosting Democrat activities at this place of business. It may be that it didn’t matter until he took it a step further and advertised his political leanings with signs. Using the examples of Chic-fil-A and Hobby Lobby as examples of businesses known for conservative politics is a little different in that it is the business owner’s political contributions that became public knowledge. These two businesses don’t allow individual stores to do political events.

Medina re-opened the family business after it was closed four years ago. His parents “migrated” to America and he was born in America. The way the CNN story frames that part of his story leaves it unclear if his parents are legal immigrants. Medina says, “Made in Mexico, delivered in the US.” He says he supports Elizabeth Warren’s views on immigration, which is the open borders, total amnesty position.

Medina believes that working in the food industry has been the driving force behind his participation and commitment to local politics. After the 2016 general election, he sent an email to community leaders to discuss the rhetoric and the immigration policies that President Donald Trump promised to enact.

In less than 48 hours, I was sitting with the mayor at that time and the police chief,” he said. “I wanted to ask what was going to happen” in Marshalltown, which is “a community of immigrants.”

Medina’s position as a business owner has given him an opportunity to discuss issues affecting his community. He said getting involved helps him feel represented.

Iowa never entirely shut down businesses so he has been able to remain open throughout the pandemic and keep his employees. He has participated in feeding needy families. His focus on immigration even appears on his receipts – “Immigrants make the United States great. They also cooked and served your food today.”