Slavery Reparations? We Already Tried Them and They Didn’t Work 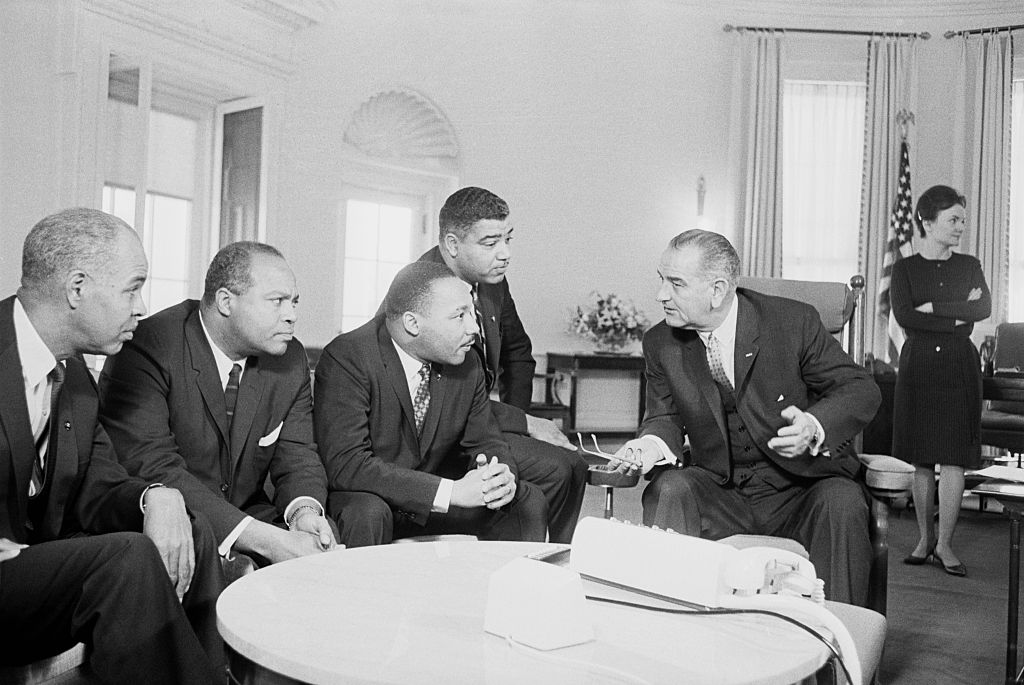 Lyndon Johnson’s War on Poverty was intended to raise up black Americans. Instead it benefitted bureaucrats and big unions.

President Johnson meets with four leaders of the civil rights movement, discussing the president’s war on poverty, and the effect of poverty on the African American population. Credit: Getty Images

The question of whether American taxpayers should make reparations to the descendants of black slaves has once again been raised, this time with California Democrats leading the charge. On September 30, Governor Gavin Newsom signed Assembly Bill 3121, which creates a nine-member task force to determine what the Golden State owes its African-American residents for past wrongs and suggest specific remedies by a year from next June.

The points made by both sides are by now familiar. Those arguing in favor of reparations say black Americans have never been compensated for their ancestors’ forced removal from their homelands and subsequent servitude in the plantation South. Opponents are troubled by any legislation that might benefit those African Americans not descended from slaves while, at the same time, penalizing those whites whose ancestors either came to the United States after the Civil War or fought bravely against the Confederacy.

Unfortunately, one critical fact is always ignored whenever the issue of reparations resurfaces—namely, that any financially expressible amends the country might owe its black citizens was made long ago. In January 1964, President Lyndon Johnson declared an “unconditional War on Poverty in America,” a war that by 2015 had cost the nation more than $22 trillion, or three times what we’d previously spent on all shooting wars.

It is true that President Johnson did not name his program “slavery reparations,” which in the mid-’60s would have been a non-starter with the so-called “Dixiecrats” in his own party. But as he soon made clear in a 1965 speech at Howard University, his primary goal was to benefit the descendants of African slaves, and not just with equality of opportunity but equality of results. “So, it is the glorious opportunity of this generation to end the one huge wrong of the American Nation,” Johnson told the audience.

Yet in the years since President Johnson’s 1965 address, the poverty rate for African Americans has fallen a few points in good times, risen a few points in bad, but on average remained essentially unchanged. (All the more remarkable given that the poverty rate for blacks plunged by half in the 15 years before the War on Poverty.) Today only 26 percent of blacks ages 25 and older have a bachelor’s degree, compared with the national average of 36 percent.

But the failure of Johnson’s attempt to make up for the unfair historical treatment of American blacks was not an indicator of whether sufficient money had been raised for that purpose, only of how effectively it was spent. The villains of that time were not the taxpayers of every color who allowed themselves, as well as their children and grandchildren, to be put on the hook for reparations. The blame properly falls on the four groups of intermediaries most involved in shaping the War on Poverty.

The first of these groups consisted of the politicians, policymakers, and bureaucrats who channeled the anti-poverty funding into a complex administrative overlay, involving over 100 programs, which ended up benefitting themselves far more than poor blacks. “Feeding the horses to feed the sparrows,” as Senator Daniel Patrick Moynihan sarcastically described it. Michael Harrington, a prominent white socialist of the time, made so much in fees from his own involvement in this top-down approach that pangs of conscience finally drove him into psychotherapy.

Even as it was becoming clear that bureaucratic regulation was probably doing more harm than good—giving housing subsidies only to single-parent families (effectively discouraging marriage) and disincentivizing work—the nearly incomprehensible complexity of federal programs meant that blacks still had to access their benefits through case workers. As one angry welfare mother said to the Washington Post in 1966, “They give you freedom with one hand and take it away with the other. They give you a little money and they treat you as if you were in jail.”

The second group of self-serving intermediaries consisted of all the university social scientists who prospered during the 1960s and ‘70s by producing thick reports and demonstration projects to confirm whatever their government sponsors wanted to hear. As John F. Cogan documents in his 2017 history of federal entitlement programs, The High Cost of Good Intentions, all the seemingly scientific studies of that time, which purported to show how expanding welfare programs would make black Americans more independent, were consistently wrong: “There was, in fact, precious little evidence to support the contention that social welfare services would prevent welfare dependency or help existing recipients achieve self-sufficiency.”

The third group to siphon off America’s slavery reparations were the opportunistic attorneys unintentionally empowered by the centerpiece of President Johnson’s War on Poverty, the 1964 Economic Opportunity Act (EOA). Written to financially incentivize urban and rural minorities to form community action groups, which, in turn, could help local welfare recipients become self-sufficient, the law was soon exploited by legal services lawyers and related professionals to do the very opposite: sue the government for even more dependency-creating benefits.

As early as 1965, Newark’s Hugh Addonizio, Los Angeles’ Sam Yorty, and other mayors tried to warn Washington that most of the leaders of these groups were simply building profitable personal fiefdoms. Chicago mayor Richard Daley noted that the activists funded by his city’s community action agency read “like a fundraising committee for the Democrat Party,” while Congressman Adam Clayton Powell said Johnson’s War on Poverty had manufactured “giant fiestas of political patronage.”

Unfortunately, the political reaction to this growing corruption turned out to be just as crippling to black America as what it was trying to stop. Realizing that minorities needed a voice separate from the community activists posing as their champions, states around the country began funding non-profit organizations to represent the interests of the major minority groups in their regions: most typically for blacks, Hispanics, and Native Americans.

As sensible as this arrangement first seemed, it left the newly created non-profits at the mercy of a fourth self-serving intermediary, local public employee unions, which especially in blue states could influence how much the legislature annually donated to various charities. The result was that policies like school choice—extremely popular with African-American families but doggedly opposed by public school teachers—were rarely endorsed by any state-funded or union-subsidized group supposedly set up to look out for blacks. At the same time, these civil rights groups were expected to back union efforts to keep Washington’s War on Poverty money flowing through local welfare bureaucracies, regardless of any negative effects.

That today’s black Americans feel cheated out President Johnson’s promised reparations is understandable, but it was not by today’s taxpayer, who remains a co-signer on the multi-trillion-dollar debt to fund the War on Poverty. Their rightful grievance is with the four groups that pretended to be faithful stewards of the money raised, while primarily serving their own interests: government bureaucrats and allied policymakers, academic researchers, legal services lawyers, and public employee union leaders.

The fact that the new California law encourages its task force to define reparations very broadly—as public works projects or job training programs, for example—suggests that it too has been crafted by the same opportunistic intermediaries. As the great biologist Charles Darwin famously noted, if you want to know who the real predators are, look for the best camouflaged.

Dr. Lewis Andrews was executive director of the Yankee Institute for Public Policy at Trinity College from 1999 to 2009. He is author of the new book Living Spiritually in the Material World (Fidelis Books).