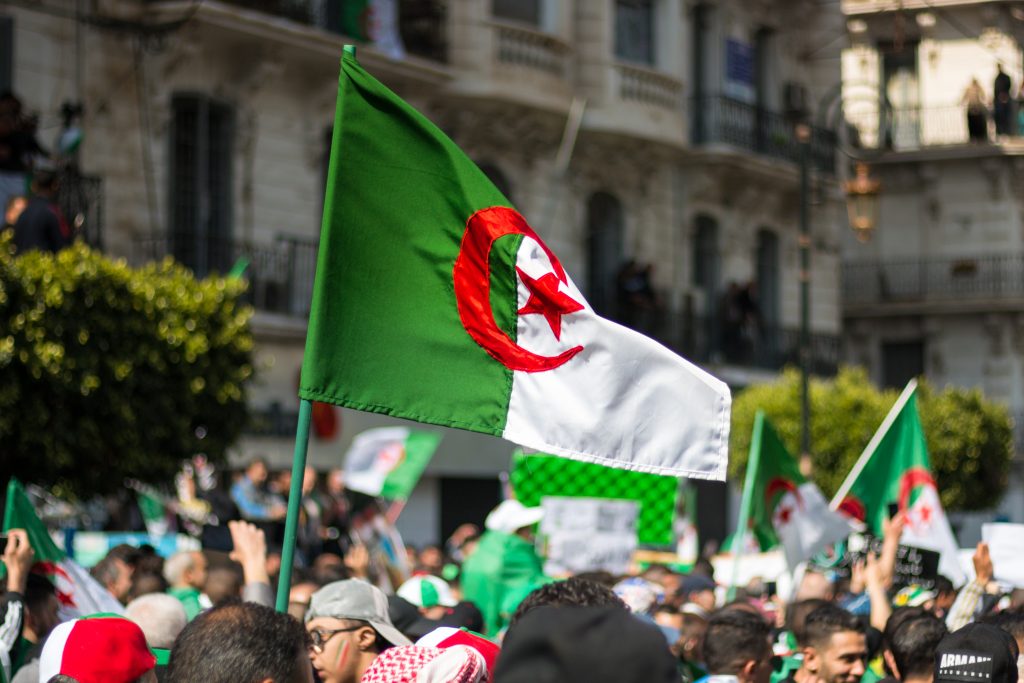 Some analysts have recently pointed to a “cold war” between the Turkey-Qatar partnership and the United Arab Emirates (UAE)-Saudi Arabia-Egypt bloc. Whether or not this term accurately describes the growing friction between the Middle East’s two political poles, such rising temperatures are further polarizing the Arab world. Against the backdrop of the Gulf Cooperation Council (GCC) crisis’ regionalization and internationalization since mid-2017, this “Cold War” continues exacerbating regional frictions.

Such division is quite evident in the Maghreb, especially in Libya. Algeria, however, has not suffered from such polarization stemming from this cold war. Algeria’s leadership, to its credit, has impressively prevented regional geopolitics from dividing their country or pressuring its foreign policy into aligning with one bloc or another.

Algeria views itself as a regional heavyweight with its own principles. The idea of other countries attempting to order Algeria around does not sit well with officials in Algiers. Due to natural gas wealth, history, and ideology, Algeria is capable of fortressing itself from foreign pressures, including those from the GCC.

Bestowed with enormous natural gas and oil wealth, Algeria has not needed financial support from GCC states that would come with political strings attached. This position contrasts with poorer Arab states such as Egypt which have grown dependent on Gulf monarchies and have foreign policies reflecting their economic dependency on GCC members.

Algeria’s history as a French colony and its bloody war for independence (1954-62) have made the concept of sovereignty sacrosanct to virtually all Algerians. Algerians are sensitive about preventing NATO countries, chiefly France, from intervening in their internal affairs, as well as other countries across the “Global South.” For example, whereas in August roughly 60,000 Lebanese signed a petition calling for their country to return to its former status as a French colony, such a petition in Algeria would have difficulty finding any signatures.

To understand what Algeria represents on the international stage, one must appreciate the importance of the following concepts and institutions to Algeria: de-colonization, anti-imperialism, pan-Africanism, Arab nationalism, secularism, socialism, and the Non-Alignment Movement. Algeria’s foreign policy principles have not changed over time, even when domestic, regional, and international circumstances have evolved. A recent case in point has been President Abdelmadjid Tebboune’s statement about Algeria’s commitment to not formalizing diplomatic relations with Israel unless and until a Palestinian state is established with its capital in East Jerusalem—a marked contrast from the UAE and Bahrain, which normalized ties with Tel Aviv in August/September 2020. Moreover, this Algerian worldview helps explain the country’s opposition to NATO members’ interventions in Libya, Mali, Syria, and elsewhere. The ways in which Algiers has responded to both the blockade of Qatar and the Libyan conflict are highly informative of how Algeria’s “sovereigntist governance ideology” influences its foreign policy when it comes to Arab-Arab conflicts.

A Friend to All in the Divided Gulf

Algeria’s interest in maintaining cooperative and working relations with countries on both sides of the GCC crisis has been a factor driving Algiers’ neutral stance regarding the Arabian feud. “It has adopted a rigorously neutral stance vis-a-vis this dispute, which is consistent with its foreign policy of respect towards the national sovereignty of other countries,” explained the International Crisis Group’s Riccardo Fabiani. “From Algiers’ perspective, this is a matter best left to the countries involved and there is no need for Algeria to step in and take sides.”

Algeria sees its relationship with each Arab Gulf monarchy as special and worth preserving. Trade, banks, and ports have made Algeria close to the UAE, as did the fact that Abdelaziz Bouteflika was exiled in Dubai during the 1980s. Cultural and religious figures have created a special relationship between Algeria and Saudi Arabia. Journalists and academics have established strong Algerian-Qatari links with many Algerians working prominent roles in Al Jazeera and other Doha-based media platforms. Religion heavily shapes Algeria’s relations with Oman as both countries are home to many Ibadi Muslims. Scientific research has strengthened Algerian-Kuwaiti ties. Like Tunisia, Algeria wants as many GCC states as possible to be investors in the Algerian economy.

Although fully determined to maintain neutrality in the Gulf dispute, Algeria understands both sides’ perspectives. Algiers sympathizes with Abu Dhabi’s anti-Islamist agenda, which is largely an outcome of the North African country’s “black decade” of the 1990s. At the same time, Algeria is also sensitive to Qatar’s struggle to defend its national sovereignty. Arguably, however, Algeria’s decision to maintain economic and diplomatic ties with Doha was a ‘pro-Qatar’ stance. As Fabiani opined, “[Algeria’s] position of neutrality has been lauded by the Qataris and it is legitimate to suspect that the Emiratis have found it less appealing.”

Dr. William Lawrence, a Professor of Political Science and International Affairs at American University, maintains that Algeria’s relations with the Gulf in general has suffered from the GCC crisis, even if the Arabian feud has not impacted Algeria in any major ways, at least compared to neighboring countries like Libya. Since mid-2017, Algeria had to “transition from dealing with a growing, relatively united, and economically robust Gulf, to a Gulf region in which outside states had to choose between one country or another. This has been further compounded by the COVID-19 economic contraction.”

In maintaining neutrality vis-à-vis the Gulf crisis, Algeria has faced some problems. For neutral states such as Algeria, the feud “strained relations with all the Gulf countries because they weren’t picking sides,” as Dr. Lawrence explained. This had repercussions for Algeria’s foreign policy in relation to Libya, Syria, Yemen, and others on the international stage. Given its long border with Algeria, Libya’s civil war amounts to the Middle East’s cold war landing on Algeria’s doorstep. Thus, the outcome of this nightmarish conflict is extremely important to Algiers.

When Your Neighbor is on Fire: War in Libya

In Libya, where a civil war has been raging since 2014, Algeria is also keen to maintain a certain balance that is consistent with the Maghrebi country’s ideology and historic foreign-policy traditions. Algiers fears how certain actors—chiefly Turkey and the UAE—are pursuing regional hegemonic ambitions by intervening in Libya.

Algeria and Turkey share an interest in the UN-recognized Government of National Accord (GNA) not falling to General Khalifa Haftar’s forces. Consequently, Algiers initially had some sympathy for Ankara’s militarized agenda in Libya soon after Turkish military intervention began intensifying in late 2019. Nonetheless, Algeria has grown more fearful of Turkey’s “neo-Ottoman” agenda in Libya and concerned about the Turkish military presence stretching further throughout its neighbour. “[Officials in Algiers] are wary of Turkey establishing a permanent presence in Libya, and Ankara’s presence in the Al Wuttya airbase, near the border with Algeria, is a source of concern… they fear a new military escalation in central Libya,” explained Fabiani.

That said, some experts argue that while Algeria is opposed to all foreign powers’ military intervention in Libya, Algiers is more against the UAE’s and (potentially) Egypt’s interventions than Turkey’s. According to Dr. Lawrence, this has to do with the fact that Algeria ranks its threat perceptions in the following order: 1) Global terrorist and criminal groups such as Islamic State franchises in the Sahel and al-Qaeda in Islamic Maghreb; 2) Morocco; 3) France; 4) Any actor aligned with France, including Egypt, Haftar, and the UAE; and 5) Turkey.

Moreover, in light of Egyptian President Abdel Fatah el-Sisi’s talk about Sirte being Cairo’s “red line” and his threats to unleash an Egyptian military intervention to push back against Turkish-backed, GNA-allied militias, Algeria has been deeply concerned. This is largely due to North Africa’s balance of power possibly shifting in ways that would undermine Algerian interests. Fabiani said that “Algeria fears an Egyptian intervention, which could eliminate that sort of ‘buffer’ that has traditionally separated these two regional heavyweights for decades.”

The 64,000-dollar question pertains to a debate taking place within Algeria today about whether the government should have the constitutional right to deploy national armed forces outside its borders. This is an intense debate going on between elite figures as well as citizens throughout society. That this question is so controversial speaks volumes about the extent to which Algerians adhere to the sovereigntist governance ideology but also, more practically, the real threat that continuation of the Libyan civil war poses to Algeria’s national security.

In the Arab League, Algeria is an outlier. Globally, the country is a geopolitical rarity. While many Arab states with hegemonic aspirations operate in certain ways that Algeria never would, the Algerians have proven adept at sticking to well-articulated international positions with firm sensibilities that shape Algiers’s geo-strategic thinking.

Over many decades, international dynamics have changed, such as the Soviet Union’s collapse and the end of the Cold War in 1991, the terrorist attacks of September 2001, and the “Arab Spring” a decade later. Yet Algeria did not change its principles even as many other Arab states did so, either opportunistically or from positions of weakness. In today’s rapidly changing world, and in a Middle East that’s growing increasingly polarized, Algeria’s foreign policy vision remains clear, principled, and ideologically coherent.

Aicha El Alaoui is an intern at Gulf State Analytics.