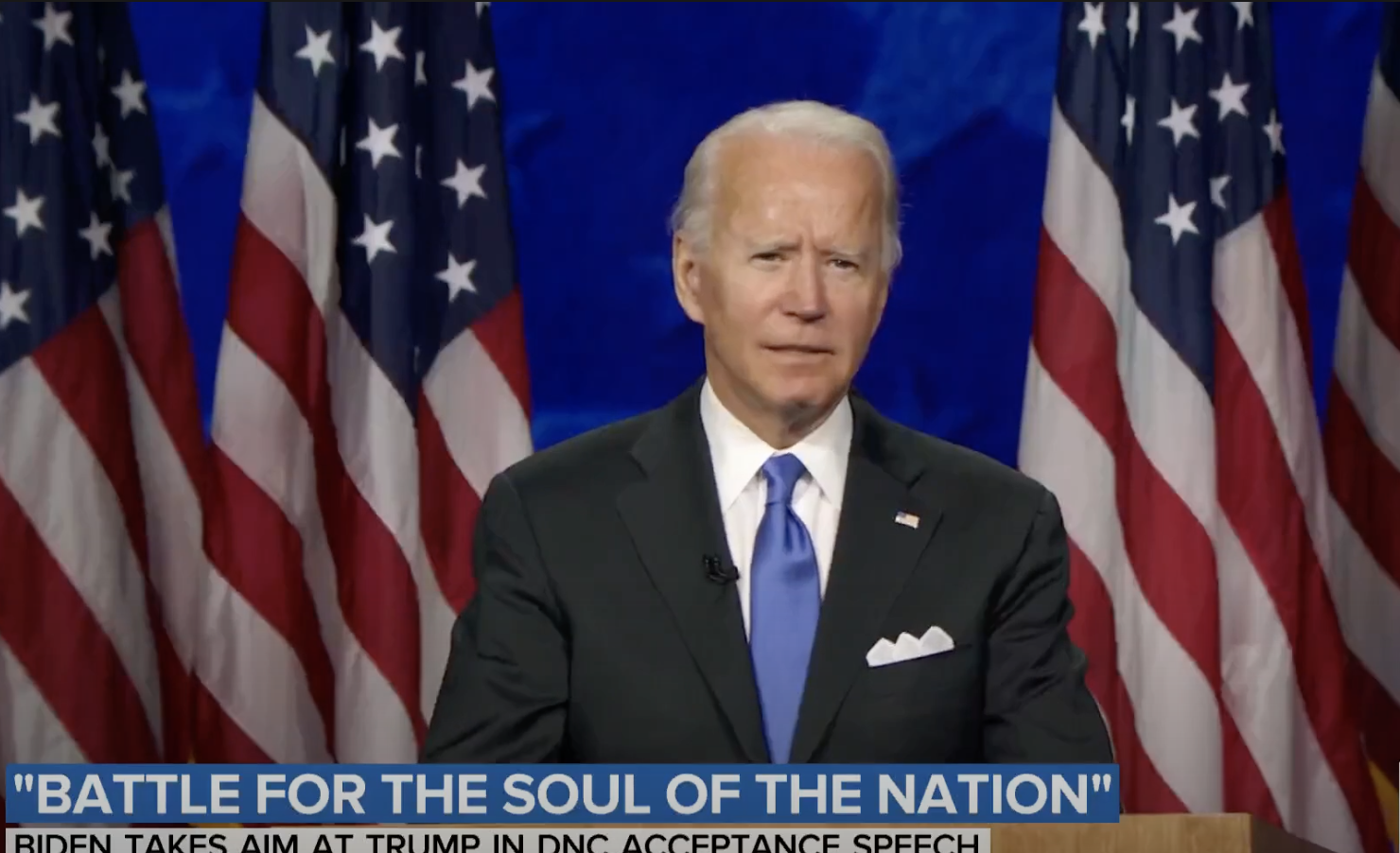 On April 25, 2019, Joe Biden revealed that America is in the middle of a spiritual civil war.

In a speech announcing his candidacy for the 2020 Democratic nomination, Biden identified the seminal event he says inspired him to pick up his metaphorical sword. It was a 2017 “Unite the Right” rally in Charlottesville, Virginia, where white supremacists clashed with Antifa members and others over the contentious issue of removing Confederate monuments:

[W]e saw Klansmen and white supremacists and neo-Nazis come out in the open, their crazed faces illuminated by torches, veins bulging, and baring the fangs of racism…. And that’s when we heard the words of the president of the United States that stunned the world and shocked the conscience of this nation. He said there were, quote, “some very fine people on both sides.”

After this lurid, emotionally charged, and totally discredited story (Trump explicitly condemned the white supremacists at the event — the “very fine people” were those on both sides of the statue removal debate), he declared,

We are in the battle for the soul of this nation.

That sentence — along with the crazed faces, bulging veins, and bared fangs — constitutes the foundational myth (or “Big Lie,” if you like) at the center of Biden’s crusade to save America’s soul. Think of it as a progressive rendition of “Make America Great Again,” dressed up in angelic garments and wielding a flaming sword of justice.

It’s tempting to dismiss Biden’s crusade to save our soul as nonsense on stilts, to use Jeremy Bentham’s phrase. But the candidate insists that it’s all true; it’s “not hyperbole”; he “really means it,” etc.

As my teenage daughter says, “Whatever.” With Biden, it’s no longer certain (if it ever was) if he’s lying or if he’s just forgotten what he said before.

What is certain is that the idea of fighting a spiritual war against Trump and his “enablers” keeps Biden’s supporters and the mainstream media (but I repeat myself) distracted, self-assured, and uninterested in other issues that they’d rather not discuss. These include Biden’s record in the Senate, his foreign policy blunders, his plagiarism, his racial insensitivities, his 1994 crime bill, his lackluster turn as vice president, his Chinese and Ukrainian connections, Tara Reade, his hair sniffing, Hunter and China, Hunter and Burisma, his stance on court packing, his lukewarm base, his growing senility, and his constant lying.

Luckily for him, reporters don’t want to discuss those things either. That would waste precious time that could otherwise be spent bashing the president.

It’s also much easier to campaign as a crusader, locked in virtuous combat with a devil and his minions that have poisoned and corrupted the soul of the country. (Forget for the moment that, as a progressive, you don’t think America was ever that good, let alone great.) Candidates and their voters don’t need to think too deeply about issues when they’re on the right side of an epic struggle between good and evil.

Economist Thomas Sowell would see Biden’s cri de guerre as a textbook example of the “vocabulary of the anointed” — a high-minded, but largely meaningless phrase, serving only to highlight the moral rectitude of the person using it while demonizing any who disagree. It’s the politics of self-congratulation.

The beginning of a bad idea

Given his reputation as a serial plagiarizer, it won’t shock you to learn that Biden didn’t come up with the idea that a country might have a soul.

Rev. Martin Luther King Jr. was one of the first public figures to refer to America’s soul. An ordained Baptist minister, King usually preached about saving souls in a strictly theological sense. In 1957, though, he and others with the Southern Christian Leadership Conference chose “To Redeem the Soul of America” as their group’s motto.

Since King, the only other prominent politician (until Biden) to use the concept was Mitt Romney. In his campaign for the 2012 Republican nomination — and throughout his contest with Barack Obama — Romney regularly mentioned the S-word in his stump speeches.

At the time, Romney was criticized for adapting a slogan so close to MLK’s. Some Republicans thought it said both too much and not enough. To make matters worse, Romney never bothered to explain what the phrase meant, nor did he have the Elmer Gantry–esque charm (see Joseph Robinette Biden) to pull it off.

Of course, the Left took offense at the whole idea of a Mormon politician playing missionary to the nation.

“America’s soul doesn’t need saving,” wrote Timothy Noah in the New Republic in 2012. “I’m a Democrat, but I’d think that even if I were a Republican. You’re welcome to seek my vote, governor. But leave my soul the hell alone.”

Oh, what a difference eight years makes. Today, the Left can’t seem to get enough of Biden’s soul talk.

Most of the time, Democrats prefer to avoid subjects like God, immortal souls, eternal judgment, and so on. These days, though, they love it when their folksy Irish-American candidate stands up on stage and does his Billy Graham routine. In fact, most of them would happily sign up for Betsy DeVos’s Bible study group if it meant Trump would burn in hell.

In his book The Righteous Mind: Why Good People Are Divided by Politics and Religion, author and psychologist Jonathan Haidt explains a growing problem with the way Americans — especially those on the left — handle political disagreements:

[W]hen a group of people make something sacred, the members of the cult lose the ability to think clearly about it. Morality binds and blinds. It binds us into ideological teams that fight each other as though the fate of the world depended on our side winning each battle.

By framing the political campaign as a quasi-religious battle for America’s soul, Biden and his supporters are bound (in Haidt’s sense) to treat half of their fellow citizens as not just wrong, but as bad people, even enemies. This is why a President Biden would never be able to unify us, despite all his platitudes about bringing the country together. If anything, American politics would become even more divisive. The “Healing America’s Soul” section of the DNC site shows why Trump’s defeat would only be the beginning of this holy war.

On November 3, we’ll find out if a majority of Americans listened to Biden’s battle cry. Most Republicans, though, agree with President Trump’s opinion of the former vice president’s soul-saving ambitions.

God help us if we give Joe Biden the chance to save our souls.