Hold on to your hat: Hunter’s hard drive rollout this week is going to unleash a whirlwind 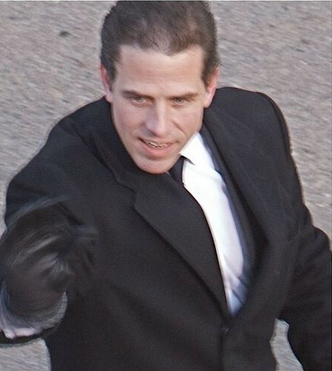 See also: Things may soon get a lot worse for Hunter and Joe Biden

President Trump may want to replace “YMCA” as the closing song for his rallies with Bachman Turner Overdrive’s “You Ain’t Seen Nothing Yet.”

Joe Biden has gone into hiding for the next four days (“to prepare for the debate”) as the social media censorship of information on Hunter Biden’s hard drive fails to force it down the memory hole. So massive is the cache of information on corruption that daily updates in digestible bites that build toward public rejection of putting Joe Biden in the Oval Officeis the strategy that makes most sense.

We can safely speculate that that’s exactly how it will playout now that we know that Steve Bannon was given a copy of the hard drive and is orchestrating the rollout in collaboration with Rudy Giuliani. Bannon himself confirmed this in an interview with Revolver:

Steve Bannon has since clarified to Revolver News that he was brought into the project based on familiarity with corruption in corporate America, on Wall Street, and within the Chinese Communist Party and America’s political class. Mr. Bannon revealed that he “worked up and executed the roll out plan” of the information contained in the Hunter hard drives. Given his close knowledge and familiarity with an issue of such explosive importance to the election, Revolver asked Mr. Bannon a few questions pertaining to the contents of Hunter’s hard drive and the political implications of their release.

Revolver: What is the most incriminating thing on the hard drive? Rudy has suggested illegal things, and as Revolver reported, the FBI person tasked with the hard drive is associated with the child pornography division. Could you give more insight into how bad it is we’re talking about?

Mr. Bannon: Joe Biden is a liar, a fraud, and compromised by Chinese cash. In short, he is a national security crisis. The hard drive combines emails and text messages that show a massive involvement with companies controlled by the Chinese Communist Party. Also, there are 25,000 images that show a drug-addled, depraved lifestyle — one that decent hardworking Americans will not want near the White House.

There is much more. Read the whole thing.

Rudy Giuliani, for his part, did a complete hour-long interview with Mark Levin yesterday, whose first airing was regrettably mostly missed due to live coverage of President Trump’s Carson City rally. The program was rebroadcast, and the entire show, minus commercials, is embedded below. At about 44 minutes, it is well worth your time. Rudy provides details of the way the repair shop owner came to possess the MacBook and tun it over to the FBI, which sat on it even as President Trump was impeached. His outrage over the suppression of evidence relevant to driving the POTUS out of office led him to make copies, because he feared for his life, and get them to Rudy. MUST SEE TV, and deep thanks to Mark for bringing this to us.

As for the “drug-addled, depraved lifestyle” that Bannon mentions, perhaps the most explosive element of the entire hard drive databank will be what is claimed to be pictures of Hunter engaging in sex with underage minors, taken during a visit to China, and providing the Chinese Communist Partythe ability to blackmail and control  the Biden family with the specter of long prison terms for Hunter. Wayne Allen Root is tweeting on it, claiming he has a highest level source:

BREAKING NEWS. My sources- as high up as it gets- watched videos on Hunter’s laptops TODAY. Just told me point blank…no rumor…they saw Hunter raping & torturing little Chinese children…Chinese govt has the same videos…Biden is compromised. Blackmailed. Can NEVER be Prez.

Can’t u just picture Joe Biden’s response to thousands of photos & videos of his son Hunter having sex & torturing little Chinese girls…Joe will say, “I’m sorry, I don’t remember.” And Hunter’s response, “Everyone does it, it’s no big deal.”

Just think of Biden’s 47 years in office. Gave away USA to China. Easy on China. Gave away our jobs. Gave away manufacturing. All these years he was clearly in bed, in partnership with Chinese Communist Party officials. And maybe blackmailed by son Hunter’s disgracefu actions?

From now on @realDonaldTrump should call Joe Biden “China owned Joe.” Biden is compromised, owned & blackmailed by leaders in China & all over world.

To be sure, this is still not confirmed to be true. But it does appear that the FBI first turned to hard drive over to Joshua Wilson, a specialist in child pornography, whose signature on the subpoena to the repair store owner is faintly visible. And then, the hard drive disappeared into the bowels of the FBI.

If the social media and MSM grandees think they can keep this bottled up, they are mistaken.

Joe Biden’s world falling apart. I dare you to ask any swing voter in Midwest what they think of this story. https://t.co/DJ3mgGEaef