Media beclowns itself on the Biden campaign trail 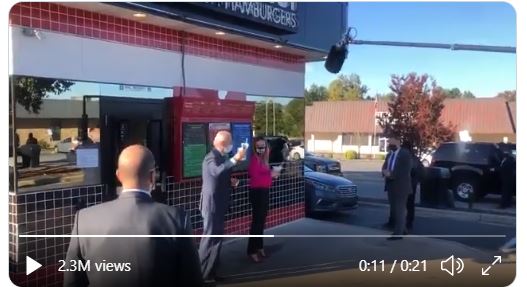 How’s this for a hard-hitting reporter’s shouted question?

“Mr. Biden! Mr. Biden! What flavor did you get?” https://t.co/GsBYUVOhbz

It’s all so cute, except that news has broken from an abandoned computer that Biden’s son was using his father’s office to peddle influence for a price — and kicking back fifty percent to Biden himself, presumably “the big guy.”

Any questions about that from the press? Not in the least. Biden’s ice cream choice of flavor is where the press is at, convinced this is now the news you need.

It’s not just the usual bias, either. Biden has “domesticated” the press by flying off the handle to a CBS correspondent who spoke out of turn:

“I have no response, it’s another smear campaign, right up your alley, those are the questions you always ask.”#JoeBiden responded to a reporter asking about a recent explosive @NYPost report about his son #HunterBiden. https://t.co/1xMBReGm1R

Back in the old days, reporters used to a crazy angry response from an embattled pol like that as a badge of honor. They were over the target. They were onto something important. Today, they fall back as obedient schoolboys, and behave themselves now with ice cream questions, which Joe is happy to answer.

Actually, there was a Fox News reporter who asked a Hunter Biden question, too, according to the Daily Wire. For that, Biden walked off refusing to answer. He’s now boarded himself up in his bunker until his debate with President Trump on Thursday.

With garbage like this going on, the press ought to just not cover his campaign at all. But they do. Dutifully asking their ice cream questions instead.

Speaking of trust, there’s also this, also from the Daily Wire:

NBC News reporter Kristen Welker, the debate moderator for the final presidential debate, has strong ties to Democrat activism and has even been caught on camera “tipping off” a member of Hillary Clinton’s failed presidential campaign about “at least one question” that she was going to ask during an interview, according to a new report.

In March 2016 Welker was busted on live television tipping off Hillary Clinton’s Communications Director Jennifer Palmieri about at least one question she planned to ask her during a post-debate interview in Michigan.https://t.co/5YD5TOADB9 pic.twitter.com/c3qTtwIG00

Like the ice-cream reporter, whoever the hell he was, “journalist” Welker helpfully lets the leftist candidate know which questions she’s going to ask to ensure there won’t be any off-script moments to cover. She’s a happy stenographer and will gladly play lapdog to the Democrat even if it means throwing her own journalistic “integrity” out the window.

Then there’s Jake Tapper, who made sure to shut down more uncomfortable issues for candidate Biden. According to the Daily Wire:

CNN’s Jake Tapper ended an interview with Trump campaign adviser Lara Trump on Sunday after she brought up Democratic presidential nominee Joe Biden’s alleged “cognitive decline” in response to what appeared to be a setup question.

Toward the end of the interview, Tapper randomly decided to bring up a comment that Lara Trump made 10 months ago when she referenced Biden’s apparent struggles on the campaign trail.

“Every time he comes on stage, and they turn to him, I’m like, Joe, can you get it out?” Lara Trump said in January. “Let’s get the words out, Joe. You kind of feel bad for him.”

Tapper said, “How do you think it makes little kids with stutters feel when they see you make a comment like that?”

“First and foremost, I had no idea that Joe Biden ever suffered from a stutter,” Lara Trump responded. “I think what we see on stage with Joe Biden, Jake, is very clearly a cognitive decline.”

Tapper then went on the attack after she made the remark before ultimately deciding to end the interview.

Apparently, bringing up Biden’s failing stamina and mental faculties is also off limits. Dictators don’t like anyone discussing their health, either.

It goes to show that the press is bending over backwards and beclowning itself, convinced that Biden’s got the presidency in the bag, and book deals galore will come of all their friendly contacts in a Biden White House. What’s bad here is that this isn’t journalism. This isn’t getting voters the answers to the questions they are asking, to make the informed choices they want to make. This is stenography and flack flattery. And unlike President Obama, this isn’t even a guy they like.

The disgusting thing is, pretty much all of them outside a few rarified circles of the conservative press are doing it now. They’re becoming just a big an issue as Biden’s corruption and incipient senility.  Whatever you call it’s it’s self-beclownings. Just don’t call it journalism.