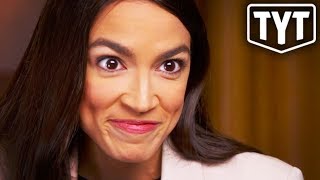 Congresswoman Alexandria Ocasio-Cortez put up with incessant, bias questions from the establishment and came out like a champion. Cenk Uygur and Ana Kasparian, hosts of The Young Turks, break it down. More TYT: https://go.tyt.com/_vN7Ds5l_Hc

“Alexandria Ocasio-Cortez said on 60 Minutes there’s ‘no question’ in her mind that President Donald Trump is a racist — but that she doesn’t intend on talking about it much.

‘You don’t talk about President Trump very much,’ Anderson Cooper asked the freshman congresswoman from New York. ‘Why?’

‘Because I think he’s a symptom of a problem,’ Ocasio-Cortez replied.

‘The president certainly didn’t invent racism,’ she continued. ‘But he’s certainly given a voice to it, and expanded it, and created a platform for those things.'”