Europe Gears Up for Another Military Intervention in Libya 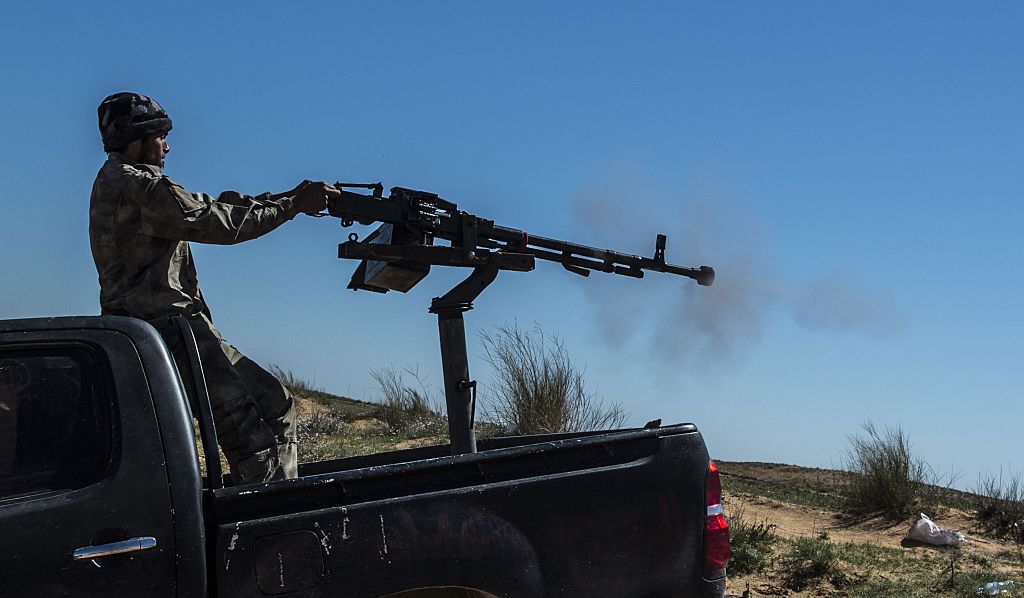 The failure of the last one isn’t stopping them. Now the U.S. needs to make clear that they won’t join.

A member of Libyan Dawn Coalition takes position with a heavy weapon on a pickup in Zintan region, Libya on March 04, 2015. (Photo by Ahmet Izgi/Anadolu Agency/Getty Images)

The story is very apocryphal now, but it holds that in 146 BC, Rome capped off the Third Punic War by sacking Carthage and salting the earth so that nothing would ever grow there again. It probably never happened, which is sort of a shame, because it’s an excellent metaphor for European activity on Africa’s Mediterranean Coast.

Wherever Europe’s attention turns in northern Africa, that region is the worse for it. In recent years, this has meant Libya, where the destruction of the Libyan government during the 2011 NATO intervention there is now set to give way to direct European Union intervention.

NATO was quite pleased with its 2011 handiwork, which saw Moammar Gaddafi removed from power and quickly killed. The assumption was that this would lead to an orderly transition of power. Instead it led to a civil war that’s continued to tear the country apart ever since.

Earlier this month, it was confirmed that the European Union is in the process of developing multiple potential military options for intervening in Libya, all intended to stabilize the situation. This is being done with an eye toward getting Libya’s oil industry back to exporting.

Since 2011, Libya has had as many as three, and at times zero, self-proclaimed governments operating out of different areas of the country. At times, the UN has endorsed a government, or created a government to endorse, and other nations in the region have backed either those governments or other rival governments, though none has ever controlled more than a fraction of Libya in any real way.

As it stands right now, there are two would-be governments in Libya. The Tripoli-based faction, endorsed by the UN and Turkey, is the Government of National Accord (GNA). The rival faction is a parliament running out of Tobruk, with the loyalty of the self-proclaimed Libyan National Army (LNA). The LNA is run by General Khalifa Hafter.

Hafter was a Gaddafi-era general, and later a CIA-funded rebel leader. Since 2011, he’s tried to launch several coups d’etat, and the LNA was the closest to being successful, bringing international recognition as his forces made it to the outskirts of Tripoli in an attempted invasion. Recent defeats have pushed the LNA back from western Libya, and the threat of a new stalemate is why the EU is interested in getting involved.

That raises multiple questions, the most obvious of which is what side the EU military would be on. Italy is seen as backing the GNA, while others, notably France, are leaning toward Hafter under the assumption that post-Gaddafi stability rests in another strongman.

The pro-junta idea came out of Egypt, and was embraced by the Gulf Arab states next. Since then, France and Russia have bought in to varying degrees. Egypt sees in Libya its own Arab Spring, during which Cairo’s dictator was ousted, a first freely elected government was brought in, and then another coup installed another strongman. The military junta seems keen to export its own system to neighbors and General Hafter hopes to be the beneficiary thereof.

Henry David Thoreau famously quipped, “If I knew for a certainty that a man was coming to my house with the conscious design of doing me good, I should run for my life.” It would not be surprising if the people of Libya had the same reaction to the EU’s attempts to do them a good turn.

The European Union doesn’t have much of a track record of using its combined military for “humanitarian intervention,” but the West in general surely does, and usually people end up worse off than they were before.

EU inexperience in alliance-wide missions means they’re starting small. The options being considered are all below the 10,000-troop commitment, which officials agreed was too dangerous. Yet time and again we’ve seen that getting in small is a recipe for getting in bigger at a later date, as the initial troops fail in their ill-defined missions and officials respond by steadily increasing their footprint until it becomes the bigger mission they didn’t want in the first place.

This is a particularly obvious path in Libya, because the EU isn’t defining at all what victory would look like, who they intend to fight on behalf of, or how they hope to accomplish anything with a fairly small troop level. But that gets brushed aside. Something must be done, and getting boots on the ground is apparently the first step towards coming up with a plan of action.

Without a plan, it’s hard to imagine the EU pulling off anything beneficial in Libya, even accidentally. More than likely, they’ll bungle into trouble, use that as a pretext to escalate, and try to skuldugger the United States into getting involved in a broader coalition effort. We ousted Gaddafi together, after all.

The U.S. needs to anticipate this turn of events, and make it clear ahead of time that they’re not onboard with any new adventures in Libya. Superficially, the big players in Libyan oil are EU companies like Eni and Shell. They’re only going to make things worse with further meddling, and it’s better for the U.S. to stay away, making sure that when people later ask what went wrong, they’re inquiring of the EU and not America.

Jason Ditz is news editor at Antiwar.com, a nonprofit organization dedicated to the cause of non-interventionism. His work has appeared in Forbes, the Toronto Star, the Minneapolis Star-Tribune, the Providence Journal, the Daily Caller, the Quincy Institute, The American Conservative, The Washington Times, and the Detroit Free Press.