Lotta grim news about COVID this past week, as has been the case for nearly the entirety of the past seven months. The percentages of cases and hospitalizations were up double digits across the U.S. last week. According to this site, the virus is spreading in 42 states right now and slowing down in just nine (including D.C.). The United States has the highest total number of cases per capita of any nation in the world with a population of over 40 million, although that may be due to the fact that we’re testing more aggressively than most of our friends in Europe.

But there is a bright spot. An important one.

If you read this post, you know that the early data on infections among students and staff at newly reopened schools has been surprisingly and mercifully low. A study being conducted by an economist at Brown University found that students are typically testing positive at a rate of 0.15 percent or so while staff are testing positive only a tinge more frequently, at around 0.25 percent. Those numbers suggest that there’s no reason to fear that schools, especially elementary schools with younger children, will be mass incubators of the virus.

New York City runs the country’s biggest public-school system and has been doing testing of its own. Result: A positivity rate among students and staff of 0.17 percent, perfectly in line with Brown’s findings. The virus just isn’t spreading very much in class, it seems.

Out of 16,348 staff members and students tested randomly by the school system in the first week of its testing regimen, the city has gotten back results for 16,298. There were only 28 positives: 20 staff members and eight students.

And when officials put mobile testing units at schools near Brooklyn and Queens neighborhoods that have had new outbreaks, only four positive cases turned up — out of more than 3,300 tests conducted since the last week of September…

If students can continue to return to class, and parents have more confidence that they can go back to work, that could provide a boost to New York City’s halting recovery.

The absence of early outbreaks, if it holds, suggests that the city’s efforts for its 1.1 million public school students could serve as an influential model for school districts across the nation.

The data from the mobile testing units works out to a positivity rate of 0.12 percent, again almost spot on with what the study at Brown has measured across hundreds of thousands of students from the data submitted by schools in her study. In fact, as chance would have it, new data for the period from September 28 through October 11 was posted by the researchers overseeing that study this afternoon. Now that students have been back in class for a month or so, might it be that infections are finally on the upswing?

Nope. Steady as she goes. 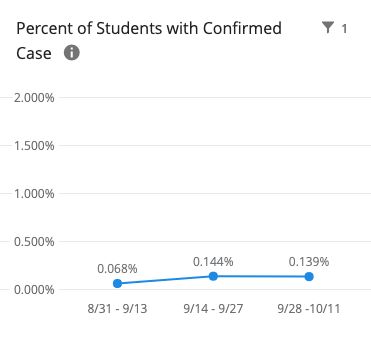 The positivity rate among staff has ticked up slightly, but it’s still remarkably low: 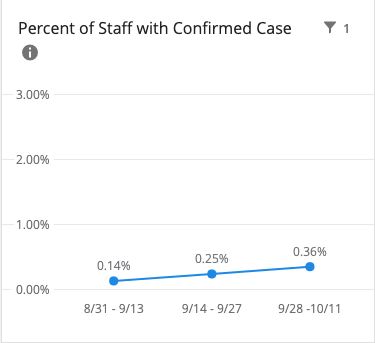 If I’m not mistaken, New York has the lowest statewide positivity rate in the country at 1.21 percent. Even with rock-bottom community spread, you’re less at risk from COVID if you work in a New York school than you are on average.

Word has gotten around that schools seem to be safer than anyone could have reasonably hoped. Big school districts are opening up.

Of the 50 largest school districts, 24 have resumed in-person classes for large groups of students, and 11 others plan to in the coming weeks, according to a Washington Post survey. An additional four have opened, or plan to open, for small groups of students who need extra attention.

Many are in Florida and Texas, where Republican governors are requiring in-person classes, but schools are also open in New York City, Greenville, S.C., and Alpine, Utah, the state’s largest district. Returns are planned in Charlotte, Baltimore and Denver…

The trend is evident, too, in tracking by the Center on Reinventing Public Education at the University of Washington at Bothell. In the beginning of September, 24 of 106 mostly urban districts were open for at least some in-person school. By the end of October, that will rise to 69 out of 106, assuming districts stick with their announced plans.

There’s a real I-told-you-so opportunity here for Trump with Election Day bearing down. Schools were part of his “reopen everything” push; he recognized that getting kids back in class was a necessary first step to getting parents back to work, although of course the jury is still out on whether infections in office spaces would be as uncommon as they are in schools. If he can stop attacking Fauci for five minutes, he has data here which he could tout on the stump as proof that America’s making progress in getting back to normal despite the threat from the virus. If nothing else, it’s a way for him to parry criticism of how he’s handled the pandemic at Thursday’s debate: “There’s a cost to keeping things closed too, and sometimes that cost is incurred foolishly. We took a chance on reopening schools and it’s paying off for millions of kids whose educations would have been upended if we stuck to virtual learning this fall.” We’ll see if he seizes the opportunity.