55M Tune in For Final Debate; FOXNEWS Tops Everyone…

UPDATE, 11:19 AM: There are still more outlets to come, but right now the final Presidential debate of the 2020 campaign is no 2016 or even last month.

Facing the ongoing coronavirus pandemic, colder weather economic and record-breaking early voting, the public tuned out the last clash between Donald Trump and Joe Biden, at least at this stage.

That’s down 18% from what the crash and burn of the first debate between the ex-VP and the former Celebrity Apprentice host had among the same eight networks on September 29. In the final numbers, the audience rose to 73.1 million.

Leaving the heavy lifting to its cable cousin, Fox did not show the Biden vs trump debate last night. Instead the Murdoch-owned broadcast network went with Thursday Night Football. That shift may have helped FNC. Just like with the first debate last month, the cable newser was the most watched network overall last night with 14.7 million tuning in.

Last night saw ABC second with 10.8 million watching, NBC third with 10.1 million and CNN were fourth with 7.2 million. MSNBC came in fifth place in debate viewership with 6.7 million and CBS was in last place with 5.5 million sets of eyeballs.

PREVIOUSLY, 8:20 AM: When all the dust is settled and all the ballots are finally counted, the real winner of the final presidential debate between poll-leading Joe Biden and President Donald Trump may be moderator Kristen Welker.

With the incumbent toning it down a touch last night, the candidates pretty much rolled out their talking-points greatest hits, for better or worse. NBC News White House correspondent Welker, on the other hand, showed America for the most part how a grown up conducted a discussion to be leader of the Free World, and that’s a victory for journalism and democracy.

However, what was also a defeat of sorts was the ratings for the 9-10:30 PM ET face-off between the septuagenarians, who obviously loath each other. Pulling in 21.4 million viewers overall in the early numbers, this second up-close debate (which was supposed to be the third, long story) was down from the first Trump vs. Biden debate of September 29 so far. Added up, the debate snagged a 4.8 rating in the adults 18-49 demographic.

In fact, in fairly traditional falloff ratings from a debut debate to later matchups, Thursday so far was down 21% in total sets of eyeballs from the 90-minute Tuesday meeting of last month. Among the key demo, there was a 32% drop from that first debate.

Once all the cable newsers and other outlets were added in, that first debate went on to be in the top three most0watched POTUS debates ever with 73.1 million viewers. Probably the best comparison to last night’s event, the third and final debate between Trump and Hillary Clinton on October 19, 2016,  pulled in a whooping 71.6 million viewers in the final numbers.

Individually, ABC was tops again last night with 8.9 million viewers and a 1.9 rating among 18-49s in Nielsen’s Live+Same Day ratings. NBC was second with 8.05 million viewers and CBS was third with 4.5 million, with 1.9 and 1.0 ratings, respectively. 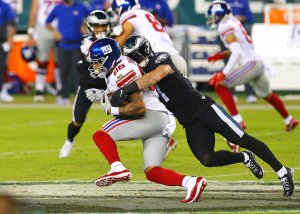 Now, even with the numbers sure to change as more data comes in, the early metrics for last night’s debate from Nashville must be qualified in another measure compared to the raucous first debate of last month. The first round of ratings for that historic event was based on information from all of the Big 4. In a classic apples and gridiron, things were a little different last night.

Skewing the data, Fox had its own battleground in Thursday Night Football and the New York Giants’ heartbreaking loss to the Philadelphia Eagles. In the non-adjusted fast affiliates, the Eagles’ last-minute 22- 21 victory snagged an audience of just over 7 million and a 2.1 rating. Those numbers are the highest of the night in the latter metric and the second-best result in the former.

Otherwise, the second and final debate between Trump and Biden was on almost everywhere else. We will update with more presidential debate numbers as they come in, including from the likes of CNN, MSNBC, Fox News Channel and others who aired the event live. In the meantime, check out our chart below for the what was on the Big 4 in primetime last night: