A calm, masterful Donald Trump made mincemeat of Joe Biden

The moment Donald Trump and Joe Biden appeared on the stage, Trump was in control. He looked robust, while Biden appeared frail and slow. Trump’s dominance extended beyond looks. He ably defended his record against attacks from both Biden and the moderator, Kristen Welker. He also politely, but insistently, pressed Biden on his decades of failure, the damage he caused to the black community, and his corrupt dealings with his son, Hunter. It was a rout.

Those expecting Trump to be a bit of a madman, as he was during the first debate, were disappointed. Trump, having achieved his goal during the first debate of forcing Biden to alienate some of his base, no longer needed the madman tactic. This time, Trump was charming, polite, and endlessly upbeat about America’s prospects. Biden, meanwhile, literally said that America was “about to go into a dark winter. A dark winter.”

As expected, Welker was a biased moderator. To her credit, she asked Biden about China and Ukraine, although she left the topic as quickly as possible. Otherwise, as with Chris Wallace and, during the town hall, Savannah Guthrie, every question that Welker posed to Trump came from a Democrat, not a neutral, position.

Even more irritating than the premise of her questions, though, was Welker’s determination to cut Trump’s rebuttals off immediately while letting Biden answer at length. Indeed, when Trump reminded Biden that Hunter walked out of China with $1.5 billion and started discussing the newly released emails, Welker frantically interrupted Trump to ensure that Biden wouldn’t have to try to answer the question.

Welker also argued constantly with Trump, something she never did with Biden. Candy Crowley apparently set a new standard for moderators getting into it with Republican candidates and we may as well get used to it.

Welker’s bias was par for the course. What distinguished the debate was Biden’s easily disproved lies and Trump’s excellent ripostes.

Biden denied absolutely that he had called Trump xenophobic for closing our border to China.

Joe Biden called President Trump a xenophobe for closing our borders to China in response to coronavirus. #factsarefacts #Debates2020 pic.twitter.com/0buleiQjkD

Joe made it clear he wants to pathologize America permanently as a place of ebbing and flowing lockdowns and government dependency. Trump, however, wants America back on her feet and pointedly said we can’t all live like Joe, either locked in a basement or getting lots of money from unknown sources:

TRUMP ON PERMANENT LOCKDOWNS: “Not everyone can lock themselves up in their basement like you Joe – he has made a lot of money from somewhere…” pic.twitter.com/zo35ClOIm5

Showing either chutzpah or stupidity, Biden was the first to raise his son’s hard drive, although he did so obliquely. When Welker asked about the recently revealed Russian and Iranian election interference, Biden announced that Trump’s own national security advisor said that Rudy Giuliani, “his buddy,” is a Russian pawn. That was the signal for Trump to hammer Biden about the $3.5 million Hunter received from Russia, the China dealings, and Burisma. For the rest of the debate, Trump never let those subjects go. Trump attacked Biden brutally on the 1994 Crime Bill:

“Now you’re saying you’re going to get it done, because you’re all talk, and no action.” pic.twitter.com/TabxQDxBYU

Biden made a bizarre, and historically inaccurate, reference to Hitler when Trump defended the peace that came from a civil relationship with Kim Jong-un:

“Having a good relationship with leaders of other countries is a good thing,” Trump said.

Biden shot back, “That’s like saying we had a good relationship with Hitler before he in fact invaded Europe.”

Under Godwin’s law, of course, the first person to make false Hitler analogies is losing.

Probably the biggest hit that Biden took, though, was on the subject of energy independence and fracking. Showing how completely he is under the control of the AOC branch of the Democrat party, Joe said that he would close down the oil industry:

When President @realDonaldTrump asks Joe Biden if he would close down the oil industry.

Biden also outright lied when he denied that he’d promise to end fracking:

A highlight came when Biden, desperate to get away from Trump pressuring him about Hunter, switched the subject to the pathos of the American family. Trump pulled back the curtain and showed what a sleazy politician’s trick Biden had just used:

Biden knew he was losing. That’s why he made the classic loser’s mistake of checking his watch:

Joe Biden looks at his watch during the debate.

Remember the last candidate who did that during a debate? 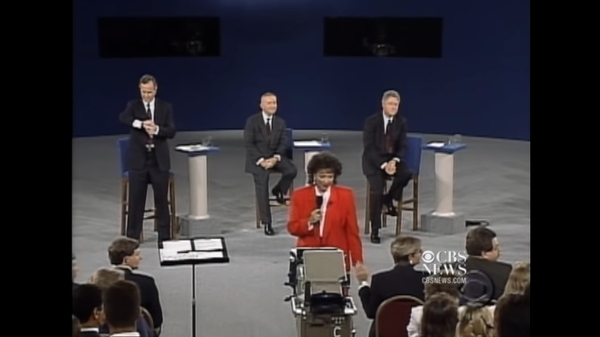 Oh! There was one other thing that happened during the debate: Trump said that he thinks Republicans will take the House. That could be Trumpian optimism, or it could be that Trump’s inside polling is telling him something.