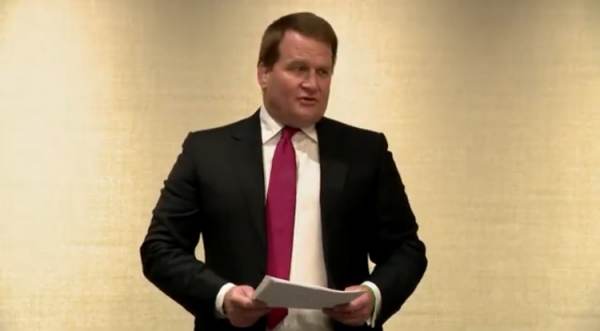 Tony Bobulinski is the CEO of Sinohawk Holdings which was a partnership between the Chinese operating through CEFC/Chairman Ye and the Biden family.

Bobulinski confirmed the Hunter Biden emails were authentic and said the Bidens went behind his back and got paid millions by the Chinese in side deals.

Bobulinski revealed that he was introduced to “the Big Guy” AKA Joe Biden and was told about Biden crime family’s influence peddling business with the communist Chinese.

Mr. Bobulinski said he received an email concerning allocation of equity, which says 10% held by “H” for “the Big guy” in that email there’s no question that “H” stands for Hunter, and “big guy” for his father Joe Biden and Jim for Jim Biden.

Joe Biden was taking between 10% and 50% of everything Hunter Biden made according to emails and text messages.

Tony Bobulinski confirmed that he was warned by his business partner never to mention Joe Biden was involved in Hunter’s shady business dealings because the Bidens (Joe, Hunter and Jim Biden) were paranoid people would find out.

“[Biden] never held stock in any such business arrangements nor has any family member or any other person ever held stock for him,” the Biden’s campaign said.

This doesn’t address whether Hunter Biden collected money on behalf of his father Joe Biden.

Biden’s camp also claimed that “Joe Biden has released his tax returns and is shows there is no indication he ever got any money from anybody in these business deals.”

Of course not because the payments were not going directly to Joe Biden.

Biden’s camp gaslighted the public and actually had the gall to claim, “Joe Biden has never even considered being involved in business with his family, nor in any overseas business whatsoever.”

Tony Bobulinski met up with Joe Biden at the Beverly Hilton in Los Angeles in May of 2017 for an hour and discussed Hunter Biden’s business deals in China.

Joe Biden also met with a Burisma executive and was photographed with Hunter’s “associates” from Kazakhstan.

The Biden campaign then attacked President Trump and accused him of having a “secret Chinese bank account” — of course this is a total lie.

President Trump had a Chinese bank account so he could pay taxes on his office that was operating in China — and the tax records prove that he never had a “secret account.”

Joe Biden can deny his involvement in Hunter Biden’s grift all he wants, but Bobulinski is now cooperating with the feds and turning over all of his evidence to back up his claims.

Bobulinski is cooperating with senate investigators and provided documents related to his business dealings with the Biden crime family to the Senate Homeland Security and Governmental Affairs Committee.

Bobulinski is also cooperating with the FBI and announced that he will turn his electronic devices and records of business dealings with Hunter and Jim Biden (Joe’s brother) over to the bureau.