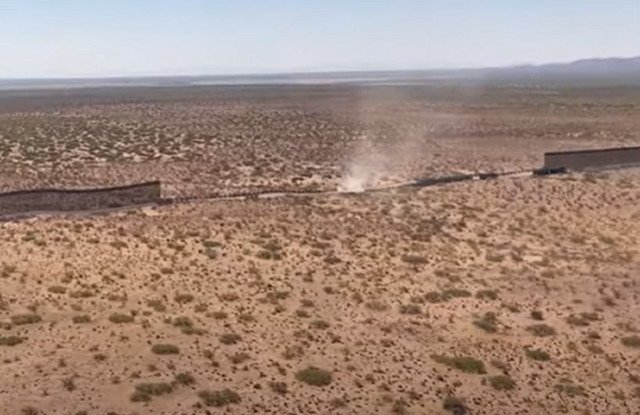 People in the media rarely mention it, but Trump has really delivered on his border wall promises.

It’s amazing when you see what the new wall looks like, compared to the laughable border barrier that used to be in its place.

It was a four foot tall barrier that you could easily climb over or slip under. Not anymore.

“Wow” was all I was able to say as the U.S. Customs and Border Protection (CBP) Blackhawk flew alongside the U.S.-Mexico border and the difference between the old “wall” system and the new wall system under construction came into view.

“This is why I wanted to fly,” Acting CBP Commissioner Mark Morgan keyed over the Blackhawk’s comms, saying the above-ground view shows how the old wall compared to the new one, which was directed to be built under President Trump’s famous promise for stronger border security.

The Blackhawk landed in New Mexico and we got out to see the difference up close. The old “wall” that covers large lengths of the border is laughably easy to get over. It consists of barbed wire fencing, held together by fragile-looking wooden posts and Normandy barriers intended to stop illegal vehicle crossings.

“So when you see this 30-foot high wall, concrete and steel into the ground, yeah, it’s brand new,” Morgan said, adding the wall is part of a system, complete with roads, lighting, and surveillance that helps deter illegal crossings or slow down illegal crossers so border patrol agents have time to respond.

You can see the stark difference in the video below. Take a look:

The new wall is a real wall.