Mark Meadows: “We’re not going to control the pandemic” 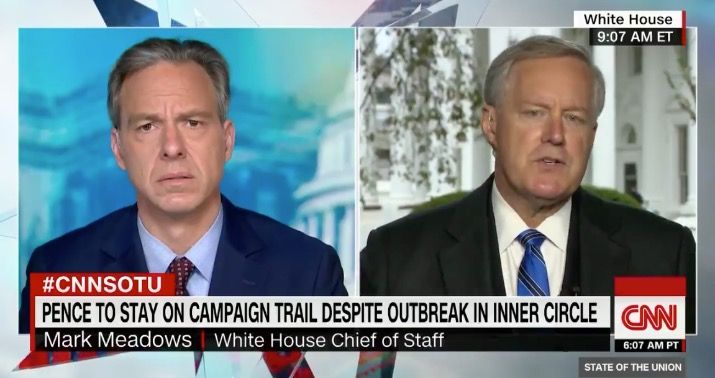 He said this about two hours ago as I’m writing this and I’m surprised there isn’t a Biden ad already circulating online to showcase the quote. Prominent Democrats are already highlighting it.

Meadows is totally right, by the way. As an empirical matter, the window for containing the virus closed some time ago. Maybe it closed in February, when the CDC mangled its chance to get testing going before the virus had spread widely. Maybe it closed in April, when Trump decided that reopening for business would be his priority instead of suppression. Maybe it closed in August, when the public blew off warnings from experts like Fauci that if Americans didn’t go the extra mile to drive national case counts down to 10,000 or fewer before the weather turned chilly, we’d be in for a brutal winter. Or maybe there never was a window to contain COVID realistically. Europeans spent this past summer patting themselves on the back for locking down stringently in the spring while foolhardy Americans rushed to return to normalcy, seeding an outbreak in the south. How’s Europe doing today?

Meadows isn’t wrong. But it’s one thing for this to be true and another thing for an influential government figure to admit that it’s true. It’d be like a top general confessing in the middle of a war that we have no realistic hope of stopping the enemy. Even if the facts on the ground plainly support that conclusion, admitting it is tantamount to admitting failure. Maybe there was a chance to win the war at some point and the administration blew it or maybe there was never any chance, but either way, the guys in charge are out of answers.

Jake Tapper: “Why aren’t we going to get control of the pandemic?”

Meadows: “Because it is a contagious virus” #CNNSOTU pic.twitter.com/1ahyatu6co

The Trumpist response to questions like this should be simple: What would you have us do that we’re not doing? They set up Operation Warp Speed as the vaccine equivalent of the Manhattan Project. They’ve got the FDA looking at potentially gamechanging therapeutics like antibody drugs. They have fast, cheap antigen tests being rolled out to boost local surveillance. A national contact tracing program at some point might have helped, but contact tracing only works well when there’s a smallish number of people infected and the U.S. has never had fewer than 30,000 or so new cases each day since March.

There’s an obvious response, though. Answer: You should do everything you possibly can, and Trump and his staff simply aren’t willing to go that far per their ambivalence towards masks and social distancing. They’ll do the big-picture stuff like fast-tracking vaccines but they refuse to be sticklers about the basic precautions doctors have insisted upon for the past six months — even in their own personal behavior, as we saw from the outbreak at the White House that infected the president himself. This is why the mask debate never ends even though it’s been going nowhere for months, and why masking has figured so prominently in Biden’s campaign messaging about coronavirus. It’s not really about masks, it’s about the White House’s commitment to doing everything conceivable to try to contain the virus, even the stuff that’s not in their personal comfort zone. Trump won’t stop holding mass rallies, he won’t insist that attendees mask up, and he won’t demand that his staff take strict precautions to avoid infection.

The top story in COVID news today, in fact, involves a new outbreak at the White House that’s brought the disease to Mike Pence’s doorstep. Between this very public reminder that the people in charge can’t even be diligent about protecting themselves and the ominous reality that the U.S. just set a daily record for coronavirus cases, Team Trump is stuck with the worst possible coronavirus optics a week out from Election Day.

Several members of Vice President Mike Pence’s inner circle, including at least four members of his staff, have tested positive for the coronavirus in the past few days, people briefed on the matter said, raising new questions about the safety protocols at the White House, where masks are not routinely worn.

Devin O’Malley, a spokesman for Mr. Pence, said that the vice president’s chief of staff, Marc Short, had tested positive. A person briefed on the diagnosis said he received it on Saturday…

The statement did not come from the White House medical unit, but instead from a press aide. Two people briefed on the matter said that the White House chief of staff, Mark Meadows, had sought to keep news of the outbreak from becoming public…

Mr. Short has been among those within the White House who have questioned the extensive lockdowns across the country.

Pence tested negative this morning, fortunately, but stay tuned. It takes the virus a few days to incubate. We won’t know how many staffers are tangled up in this new outbreak until later this week. Until then voters will be left to wonder, “Does the head of Trump’s coronavirus task force have COVID because he and the dummies around him still won’t take basic safety measures?” You can see why Meadows allegedly wanted to cover up the outbreak, even though it’s incredibly reckless to withhold information about an outbreak from people who’ve been in proximity to the infected. Now that it’s publicly known, the Trump campaign is faced with an ugly political dilemma: Do they pull Pence off the trail, which would remind voters in a visible way that the White House failed to contain the virus on its own campus? Or do they keep sending him out there, which would mean flouting CDC rules on what to do if you’ve recently been in contact with someone who’s tested positive?

Campaigning isn’t “essential” business. Pence’s official duties, like having to attend an important cabinet meeting, would qualify as essential. Campaigning is essential to him politically, but not to the country. “I think everybody’s got to put the health of the people they’re going to be in touch with first,” said Chris Christie when asked about Pence’s decision to keep campaigning. “You got to keep yourself away from everybody and I’m a little bit surprised.” Christie was chastened by his own bout with the disease and has been an evangelist for precautions like masks and social distancing since recovering. If Trump had taken the same attitude it might be helping him in the polls right now, especially with seniors who have been leery of his approach to the pandemic. Oh well.

I’ll leave you with this tweet, which is circulating on political Twitter today on the one-year anniversary of its publication.

We are not prepared for a pandemic. Trump has rolled back progress President Obama and I made to strengthen global health security. We need leadership that builds public trust, focuses on real threats, and mobilizes the world to stop outbreaks before they reach our shores. https://t.co/1qqpgayUEX