Amy Coney Barrett could be confirmed Monday for SCOTUS 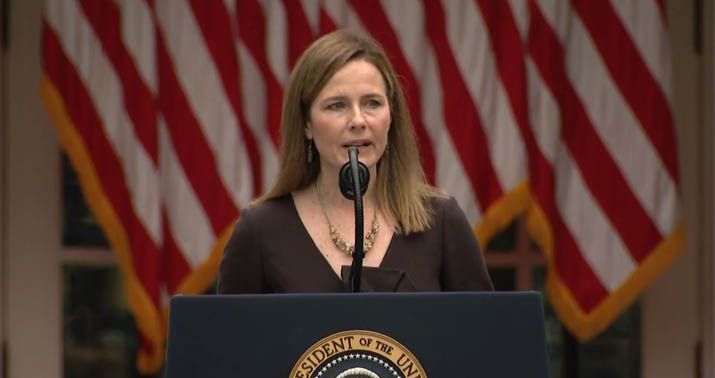 Judge Amy Coney Barrett could be confirmed as the next U.S. Supreme Court justice on Monday. The U.S. Senate voted in favor of opening up 30 hours worth of debate on her nomination today. Via The Hill:

While Sunday’s vote is only a procedural step, it underscores that Republicans have the votes to place Barrett on the Supreme Court just days before the Nov. 3 election. The timetable will set a new record for how close to a presidential election a nominee has been confirmed to the country’s highest court.

The Supreme Court fires up the GOP base, handing Republicans a victory to tout as they try to shore up support in the final days before the election. Senate Majority Leader Mitch McConnell (R-Ky.) in particular, has put a premium on confirming Trump’s judicial nominees, arguing it’s the best thing the party can do to have a long-term impact on the direction of the country.

In their fight against Barrett, Democrats have focused almost exclusively on the future of the Affordable Care Act. The Supreme Court is set to hear oral arguments Nov. 10 as part of the Trump administration’s challenge to the 2010 law, which could result in its wholesale invalidation.

“Don’t forget it, America. Don’t forget what’s happening here, because it’s a travesty,” [Senate Majority Leader Chuck] Schumer said. “And it will be an in-erasable stain on this Republican majority forever more.”…

Democrats also raised legitimate complaints on how Republican Senate leaders handled the Coney Barrett nomination due to their refusal to hold hearings on Merrick Garland in 2016 before the election. Republicans legitimately gripe Democrats were perfectly fine with hearings for Garland before taking the opposite stance in 2020. Hypocrisy, thy names are Republicans and Democrats.

The Obama and Trump administrations were well within their rights to nominate a Supreme Court justice before the 2016 and 2020 elections, respectively. Hearings should have happened on both, in my opinion, because there was no guarantee Garland would have been approved. Johnathan H. Adler at The Volokh Conspiracy defended the Senate’s decision to eschew hearings in 2016 (emphasis mine).

Adler also noted this year the number of justices who have been confirmed to their positions despite the White House and Senate being in opposite parties including Clarence Thomas, Anthony Kennedy, and David Souter. Something worth noting with Coney Barrett about to head to the Supreme Court.

Two things of note regarding today’s vote in the Senate. Susan Collins and Lisa Murkowski voted against opening debate. The latter still plans to vote for Coney Barrett for SCOTUS while Collins, who may or may not win re-election, will not support the nomination. Politics. Always politics.

Get your popcorn ready.