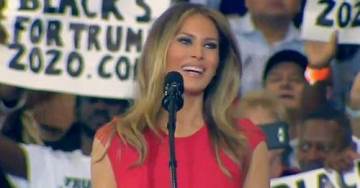 Beautiful First Lady Melania Trump is traveling to Atglen, Pennsylvania on Tuesday for her first solo campaign stop this year.

Melania will be joined by Kellyanne Conway the former Trump campaign chairwoman in 2016.

Both of these women went through a recent bout with the coronavirus.

Who can forget Melania’s prayer in Melbourne, Florida in 2017.

First lady Melania Trump is hitting the campaign trail this week, traveling to Pennsylvania on Tuesday to speak directly to voters before they cast their ballots in the final stretch before Election Day.

The first lady is traveling to to Atglen, Penn. Tuesday, for what will be her first solo campaign stop this year, where she will participate in a campaign event with former counselor to President Trump, Kellyanne Conway.

“Melania Trump’s solo visit to Pennsylvania in the final days of the 2016 campaign was pivotal to winning the state—and winning the election,” Conway, Trump’s campaign manager in 2016, told Fox News. “Now she returns as first lady, to highlight how her platform has helped Pennsylvanians and to make the case for four more years of freedom, opportunity, prosperity and security.”