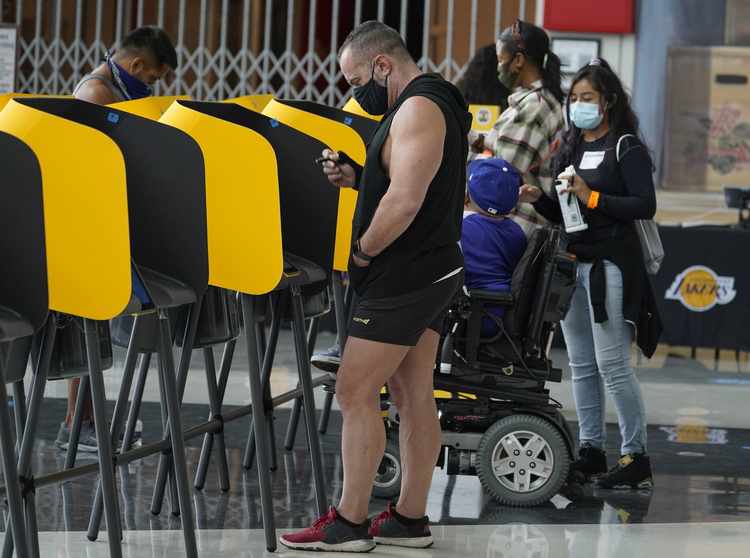 It’s that most wonderful time of year. After endless speculation, analysis, and hedging, we are tantalizingly close to having actual new election data to work with. Given this, it is a natural temptation for analysts to gravitate toward the one piece of hard data that we have in our possession: early voting numbers. Take, for example, this piece from Politico, claiming that the Democrats’ massive lead in early voting is a “warning flare.”

I have given my response on this matter before: Don’t try to divine election results from early voting returns. I made this point in 2016, when people were making the exact same arguments about Democrats’ chances off of similar data.

The problem today is the same as it was back then. Rather than reinvent the wheel, I’ll summarize my basic argument from four years ago: Unless you somehow know what is going to happen on Election Day, this argument is useless. To take an extreme example: Democrats could turn out every one of their voters early, and Republicans could still win the election by turning out more on Election Day.

Obviously, that isn’t going to happen. But we exist somewhere along that spectrum. Most, if not the overwhelming majority, of these early voters are people who would otherwise vote on Election Day. The fact that they decide to cast ballots early just isn’t all that interesting — except perhaps in a state like Nevada, where almost all of the votes are cast early. This is especially true in 2020, when fears of COVID-19 have (unfortunately) become a partisan issue, and where President Trump has been urging Republicans not to vote early.  It would probably be unusual, in fact, if we did not see a partisan advantage for Democrats in early voting.

We can add to this one other problem: human nature. Seeing patterns in clouds is a whimsical experience, one that often brings about nostalgia for childhood. It’s also a substantial cognitive problem, because you’re seeing things that aren’t there. Our brains evolved to make patterns out of seemingly disparate events, but we’ve probably over-evolved in this regard, to our detriment in predicting elections.

More importantly, when we really want to see something, we have a tendency to make it so. We can look at the cloud that sort of/kind of looks like a seagull, except that it only has one wing and no beak and 13 tendrils instead of legs. But our brain will still somehow make a seagull out of it. (Don’t get me started on images of Elvis popping up everywhere.)

How does this relate to early voting? Because we don’t have a lengthy history of good research giving our brains guidance for how to interpret early returns, it’s very easy to see what you want to see. For example, we can look at North Carolina, and see that Democrats have a 10.5-percentage-point lead over Republicans in early voting. That seems great for Democrats.

But we could also contextualize this by noting that at a similar point in 2016, Democrats had a 13.1-percentage-point lead there in early voting. In other words, Democrats are doing worse than they were at this point four years ago (and much worse than they were in 2012). Actually, with a week to go early voting is looking about the same as it did at the end of 2016 (when Democrats had a 9.8-percentage-point lead at the end), and that wasn’t a great year for them. For that matter, African American voters were 22% of the early electorate in 2016; at this point they are 20.5% of the electorate. That’s probably not what we would expect in a Democratic wave year when Republicans are being encouraged to vote on Election Day and Democrats are supposedly avoiding it.

You can see similar stories developing in Florida and Nevada, where you can make a case that things look roughly the same as they did about a week out from Election Day in 2016.

Of course, there are various rejoinders to all this. We might expect Republicans to vote against Donald Trump at higher rates than they did in 2016, and a critical mass of independents seems to have soured on the president. Maybe Republicans are using in-person early voting, cannibalizing their traditional Election Day vote. Perhaps the anticipated Trumpian improvement with African Americans and Hispanic will fail to materialize, and he’ll do worse than in 2016 with non-whites.

This precisely illustrates my point. The claim is not “the early vote actually is good news for Republicans.” The point is “the early vote is not even news.” We don’t know in these states what share of Republicans, Democrats, or independents are voting for Republicans or Democrats, and we don’t know how many voters for any party are going to end up voting on Nov. 3. This is all speculation dressed up as news. We’ve waited this long for actual election returns; we can wait eight more days.