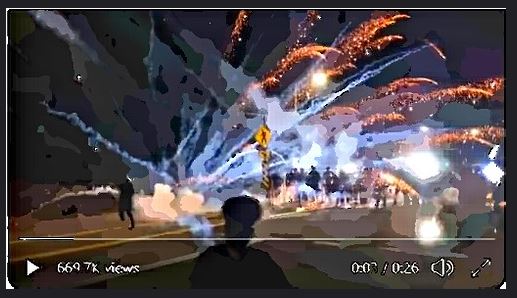 Two recent reports, when combined, paint a dark pathway for America in the coming weeks, a nation set on fire by multiple contentious court battles and widespread daily protests.

The 79 Days Report, by the Claremont Institute and the Texas Policy Foundation, illuminates possible election legal battles on the horizon and how they might play out in the courts.  The bottom line?  The litigation will be time-consuming and combative.  There’s no fast-forward button to speed up the process.  It concludes:

The second report, “Hold the Line: A Guide to Defending Democracy,” is a how-to manual for organizing massive protests, produced by a group of hard-left “researchers, organizers, and activists.”  The report encourages people to early assemble into clusters, to identify the “power holders” they want to “influence,” and then make plans on how to achieve their goals.

The report calls for “large-scale protests,” if the Trump administration and its allies prevent all votes from being counted, allows ballots to be tossed out, or fails to “remedy irregularities” in the voting.

The significance of the report lies in the level of preplanning and pre-targeting.  In 2016, most on the left believed that Hillary Clinton would be victorious and were caught off guard when Donald Trump won instead.  Yet within hours, activists were able to organize protests in city centers, brandishing signs declaring Trump “Not My President.”

Now, four years later, you can be certain that the left won’t be caught napping again on Election Night.  They’ve had months to prepare and are ready to do battle.  The many protests, riots, looting, and violent attacks the past six months are but a prelude to the coming main event.

The kickoff is likely to be the U.S. Senate vote to confirm Judge Amy Coney Barrett to the U.S. Supreme Court.  Don’t be surprised to see large-scale demonstrations against her confirmation, piggybacking on the recent Women’s March, as a means to influence still undecided voters.  The protests also have the advantage of pushing competing news stories to the sidelines, such as the Biden family corruption scandal.

Once the demonstrations begin, they will not end anytime soon; they will only become more inflamed, unless Joe Biden wins the election by a blowout, which few expect to happen.

Given that the 79 Days Report is accurate, that many ballots will not be tabulated until days after the voting concludes, protesters will flood into city streets demanding that all ballots be counted, while lawyers file suits to extend or block voting deadlines and accept or throw out ballots that appear from nowhere.

In 2000, the election was put on hold when George Bush won Florida by a narrow margin, triggering an automatic recount.  Lawyers battled in courtrooms for six weeks until a ruling by the U.S. Supreme Court finally ended the squabbling.

Jumping ahead to 2020, instead of one contested state election, there could be six or more, vastly multiplying the number of court cases.  The most intense demonstrations are likely to occur in four of the swing states headed by Democrat governors in an effort to sway legal rulings.

The Hold the Line report lays bare the leftists’ ground game.  Activists are locked and loaded.  They will have pre-selected targets.  Instead of massing in large groups, as in 2016, they plan to disperse to multiple sites — possibly homes of elected officials and judges, political pols, the police, anyone they deem to be a “power holder.”

Add to this volatile mix the well organized and funded Antifa and BLM activists, who have been perfecting their violent tactics since the death of George Floyd.  Black-masked operators can be expected to infiltrate the protests to turn nonviolent events into infernos.

Based on the two reports, the cumulative impact?  In multiple cities, in multiple locations, there will be unprecedented demonstrations, many violent.  The police will likely be overwhelmed, unable to respond to the dispersed protests — or prevented from responding — fueling fear and chaos.

Every court decision creates a new rallying cry for the left…and maybe the right, too.  The longer it takes to resolve election disagreements, the more violence and chaos, metastasizing like a cancerous growth.  The more things that get out of hand, the more out of hand things might get.

The Hold the Line report posits an election outcome that’s fraudulent, where all the votes are not counted and irregularities remedied.  Given this scenario, it calls for “another form of power to correct the balance,” an all-out revolution, in which large numbers of people participate in strikes, boycotts, protests, and other nonviolent actions, “until a democratic and accountable government is restored.”

In other words, they want to shut down society until President Trump is forced from office, not unlike the 28 Days of Resistance in Tunisia that toppled President El Abidine Ben Ali and the 25 January Revolution in Egypt that ousted President Hosni Mubarak.

Such an event seems highly implausible.  But if Trump is re-elected, no matter what happens, the left will claim the election was stolen, not unlike 2016, opening the curtain to four more years of protests and attacks on his presidency.