Associate Justice Amy Coney Barrett has a busy schedule ahead 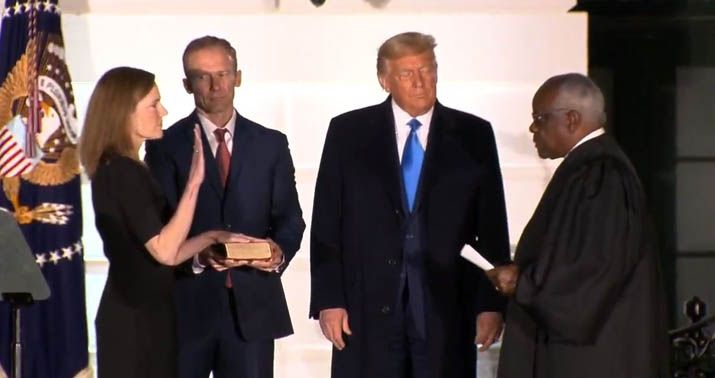 As of last night’s swearing-in ceremony, Associate Justice Amy Coney Barrett (will we ever grow tired of saying that?) is now a member of the nation’s highest court. From the sound of things, however, she’s not going to have much time to celebrate because she has plenty of work ahead of her. A number of closely watched cases with the potential for carrying historical impact are heading her way. Some have been in the pipeline for quite a while, but others involving disputes in next week’s election may arrive on an emergency basis. Predictably, we already have Democrats and their media allies demanding that Barrett recuse herself from any rulings more complicated than the naming of a new post office. (Free Beacon)

The Court is currently handling an emergency application involving absentee mail-in ballot deadlines in North Carolina, a hotly contested battleground. Democrats and progressive advocacy groups are pressing Barrett to recuse herself from such matters, arguing that President Donald Trump has created an appearance of bias by connecting her nomination with post-election court battles. Beyond the election, the Court will soon decide whether to hear an abortion appeal from Mississippi, which could embolden state-level efforts to restrict the procedure…

Barrett is facing heavy pressure to disqualify herself from such cases, after Trump said the Senate should confirm his nominee to ensure the Court has a full complement of justices to resolve any post-election disputes. The pressure campaign leans on a 2009 Supreme Court case involving a West Virginia coal baron who donated $3 million to help elect a state judge. That judge in turn cast a deciding vote protecting the donor’s company from a $50 million damages judgment.

The idea that Barrett should recuse herself from any case involving the election is laughable on its face. It would be a weak argument even if President Trump had cited a specific court case when speaking about her nomination and confirmation, but all he said was that the court should be fully staffed in the event of a court challenge involving the various states’ election laws and results. You can certainly make the argument that the court would have been capable of handling those challenges with eight justices (as they’ve been doing thus far this term anyway), but nine justices are far less likely to deadlock. What the Democrats are doing here should be obvious, but what they’re really saying is that Barret should recuse herself for any case that arises while the President who nominated her is still in office.

Some of the other cases that are brewing will almost certainly result in all manner of consternation. One of the biggest is probably Dobbs v. Jackson Women’s Health Organization out of Mississippi. It involves a question of how and when states might be able to place limits on abortions based on how far along in the pregnancy the mother is. Mississippi’s law (two of them, actually) tried to set the bar at fifteen or six weeks. The laws were immediately challenged and shot down at every level in Mississippi, with the plaintiffs and the courts citing Roe v. Wade as precedent. Democrats are very nervous about the possibility of Barrett saying the law can stand, throwing the entire pro-life versus pro-abortion battle into further turmoil.

Don’t be shocked if you hear calls for Barrett to recuse herself in the Dobbs case also, though she’s never been involved in hearing that specific case before. For that matter, she’ll probably hear demands to recuse herself from virtually all of the court’s work for as long as Trump is in office. Will she wind up doing that? I can’t imagine why she would. During her confirmation hearings, she pledged to follow the normal rules on recusal without citing any specific cases where that might be applicable. The Constitution provides two situations where judges must recuse themselves. Those are when the judge has a financial interest in the case’s outcome or when there is otherwise “a strong possibility that the judge’s decision will be biased.” The first is rarely applicable and wouldn’t impact Barrett’s ability to rule on any of the cases under discussion. The second is far more vague.

Barrett’s critics are citing a 2009 Supreme Court case involving a coal magnate in West Virginia who donated $3 million dollars to the campaign of a state judge. The judge then ruled in the donor’s favor in a case where they were facing $50 million in damages. That one seems rather obvious in terms of a potential quid pro quo, but there are few if any similarities to Barrett’s situation. Donald Trump didn’t put Amy Coney Barrett on the Supreme Court. He nominated her. Once the nomination was done, the matter was out of the President’s hands. He has no leverage over her now since he lacks the power to remove a justice from the bench once they are installed. Barrett is beholden to Trump for nothing. That’s an important point to keep in mind during the food fights to come.