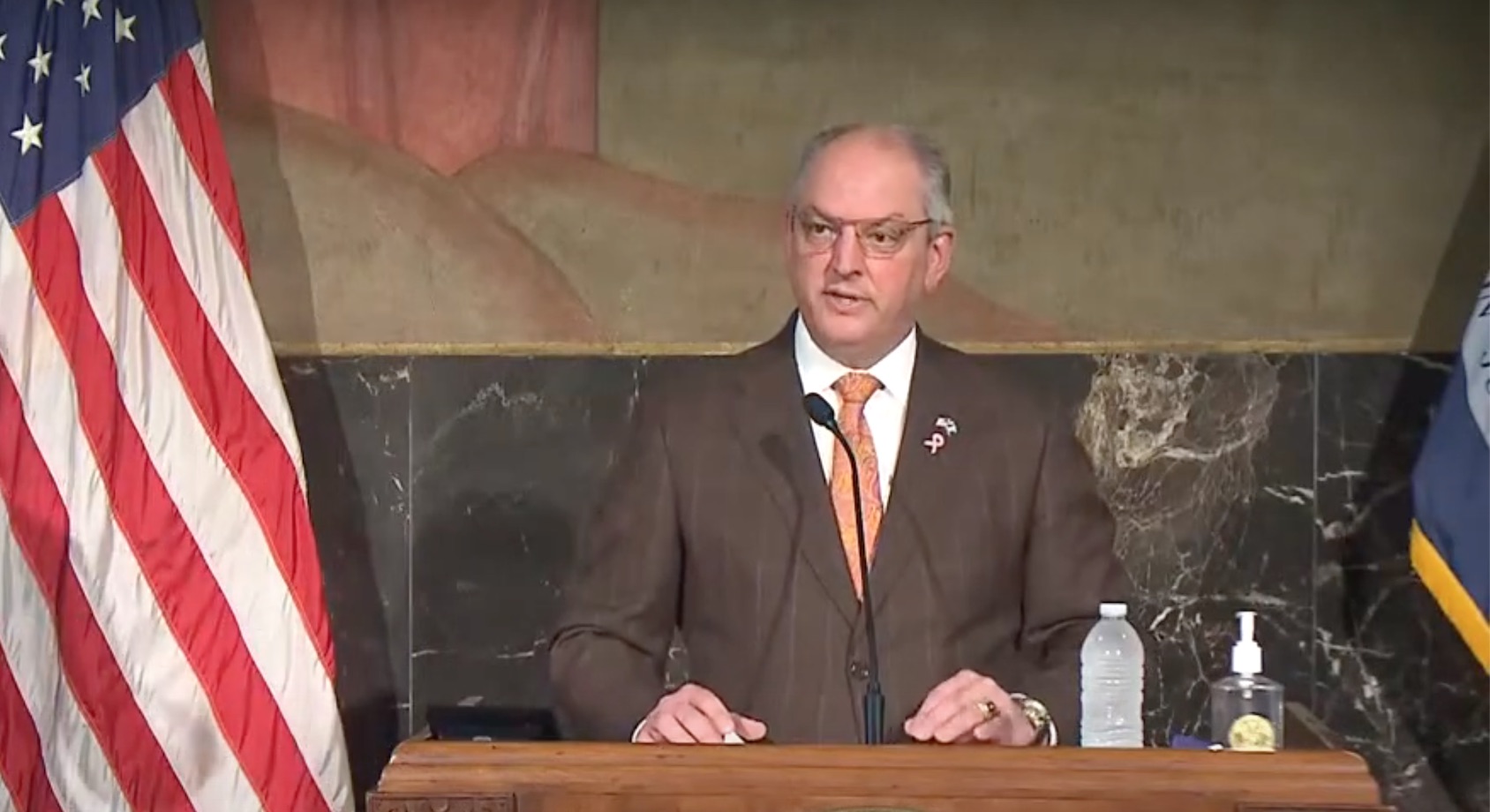 On Friday, amid all the clamor over the presidential election and other national doings, an interesting thing happened as the Louisiana Legislature wrapped up a four-week special session billed as an attempt to relieve some of the state’s many economic woes.

Namely, the House made use of a statutory remedy to cancel Democrat Gov. John Bel Edwards’ public health emergency.

And in so doing, the House members set the stage for one of America’s more interesting state-level constitutional crises in recent history.

The Louisiana law that sets up the power for a governor to declare a public health emergency is found in Title 29, Section 766 of the Louisiana Revised Statutes. But in Section 768 of Title 29, there’s a provision for the termination of such an emergency. It reads,

Edwards’ emergency declaration was filed in March, and seven months later Louisiana’s economy is a complete shambles. The state has ranked among the worst in America for jobs, and its key industries — tourism and hospitality, oil and gas, petrochemical, and agriculture — are all in a state of free fall as a result of either COVID-19, the shutdowns, or the general awful condition of the state’s economic competitiveness brought on by Edwards’ policies. While a V-shaped recovery seems to be the norm around the country, experts say Louisiana won’t be back to pre-COVID economic levels (which were terrible to begin with; Louisiana’s first quarter GDP figure was minus-6 percent, and only two weeks of that period contained COVID shutdowns) until 2023.

These developments have led to another problem: outmigration. Official numbers are not yet available, but a simple metric can offer an indication of how bad things have gotten in Louisiana. On U-Haul’s website is a rate calculator, by which users can plug in cities for pickups and drop-offs of U-Haul trucks. For the last six months it’s consistently been twice as expensive to pick up a U-Haul in New Orleans, Baton Rouge, or Shreveport for drop-off in Houston, Dallas, or Austin. That’s an indicator of a full-on exodus to Texas, or Texodus, as it’s being called in the Bayou State.

Things are so bad that the state’s unemployment insurance fund, which just a few months ago had a billion dollars in its reserve, is abjectly broke, and Louisiana is now borrowing from the federal government to keep it afloat to pay for more than 400,000 unemployment claimants left without jobs in Edwards’ COVID economy. The New Orleans metropolitan area has lost some 99,000 jobs since last year, owing to the complete destruction of the tourist trade, which props up that city. And the petrochemical plants along the Mississippi River between New Orleans and Baton Rouge have had waves of layoffs.

Meanwhile, Louisiana, which was one of the hardest-hit states in the country owing to an early spread of COVID starting in New Orleans possibly even before the virus was identified, plus the relatively poor health of its citizens, leveled off in its numbers a long time ago. The state is still turning out several hundred COVID cases a day, owing to massive amounts of testing — the Louisiana Department of Health had reported more than 2.66 million tests as of Monday, and is still going strong with 15,000 to 20,000 tests per day with daily positive test results of more than 4 percent a rarity. But hospitalizations are hovering around 600 and have been well below 1,000 for more than two months. At no point has Louisiana’s health-care system ever been jeopardized in terms of reaching capacity.

Edwards has only grudgingly given ground in reopening the state. Louisiana is nominally in Phase 3 at present, but it’s a more restrictive Phase 3 than the CDC guidelines suggest. Edwards put Louisiana under a statewide mask mandate, he’s throttled the business models of bars and restaurants, he’s clamped down on events, and churches and other entities have been groaning under the economic strain.

The state’s House of Representatives is the more conservative of the two chambers of the Legislature, and early on a petition began to circulate there that would strip away Edwards’ emergency declaration and bar him from writing a new one within two months. Organizers of the petition came tantalizingly close to getting the magic number of 53 signatures for a House majority, but were thwarted because the House Speaker, a tire-store owner named Clay Schexnayder, openly opposed the petition and lobbied a bloc of two dozen or so Republicans not to sign it.

Schexnayder has said he’s for reopening the state, though. He just didn’t like the petition as the means of doing so. Schexnayder maintained that the petition was unconstitutional, a somewhat flimsy argument that centers around the idea that one house of the Legislature can’t overturn the actions of the executive branch. But as laws are presumed to be constitutional, and as this is a law setting up emergency powers that do not obtain under normal situations and that was passed by both houses of the Legislature and signed by the governor, it’s highly debatable that Schexnayder’s former position holds much water.

In late September, Schexnayder managed to convince a majority of both the House and Senate to sign on to a call for a special session aimed at reopening the state. Schexnayder then offered a resolution suspending the state’s public health emergency law until 30 days after the special session ended. That resolution passed overwhelmingly in the House; all it needed was a majority vote in the Senate and it would go into effect, as the governor has no power to veto a resolution.

But HCR 9, Schexnayder’s resolution, never got a vote on the Senate floor. Edwards managed to successfully lobby enough weak-kneed Republican senators to keep it from seeing the light of day, and the special session devolved into what I called at my site The Hayride, which covers Louisiana politics, an exposition of Failure Theater. Things got so bad that Schexnayder, under fire on social media for not supporting the petition, began calling his critics into secret meetings where their phones were confiscated, and he and several of his legislative allies berated those private citizens for their naysaying. His security measures weren’t the best, and a federal-evidence-quality recording of one of the meetings made for some highly interesting audio.

Finally, when it became obvious Schexnayder’s hopes for HCR 9 were kaput, he relented and supported the petition. On Friday more than 60 of the 68 Republican House members signed a document that was crafted quite interestingly.

The petition kills Edwards’ emergency declaration, but it only bars Edwards from renewing a COVID emergency for seven days.

But the clock on that seven-day moratorium only starts when Edwards issues a proclamation ending the state of emergency as outlined in the statute.

Section 768 provides that the governor “shall” issue such an order. He has to do it. But Edwards refuses to, saying that Section 768 is unconstitutional. Which means that, per the statute and an opinion offered by Louisiana Attorney General Jeff Landry, Louisiana has been reopened and will stay reopened indefinitely until Edwards “takes his medicine” and issues the order the petition demands, and then seven days go by from that point.

But Edwards, in an angry press conference Monday, defied Landry and the legislators and said he was taking the matter to court. He’s seeking a declaratory judgment that Section 768 is unconstitutional, something that is less than certain, and he’s demanding that businesses throughout Louisiana continue to, in the words of Eric Cartman, “respect mah authoritay.”

Nobody here quite knows how all this is going to shake out, though public sentiment has continued to slowly turn against Edwards after an initial show of support for his shutdowns. There is a recall effort out against him, which reportedly has more than 100,000 signatures (it needs just under 600,000 by late February in order to force a recall election), and over the weekend it became quite obvious that Louisianans had had enough of mask mandates and bar closures.

But the constitutional crisis will soon make its way into the courts, as Edwards’ 24-page lawsuit against the state Legislature and Schexnayder in his role as House Speaker, seeking an injunction to stop the petition from taking hold, will result in a district court ruling and likely an appeal all the way to the state Supreme Court.

For private citizens in the state, the question is whether to ignore the governor and his mandates and restrictions or to continue acting as though there is still an emergency. The results so far are mixed, though everyone agrees it’s a chaotic situation. Louisiana is torn between a dictatorial governor and a discombobulated Legislature, and the resulting leadership vacuum will continue sucking citizens out of the state and into its neighbors.

Florida, Tennessee, and Mississippi, after all, have already reopened. They didn’t have a constitutional crisis before doing so.