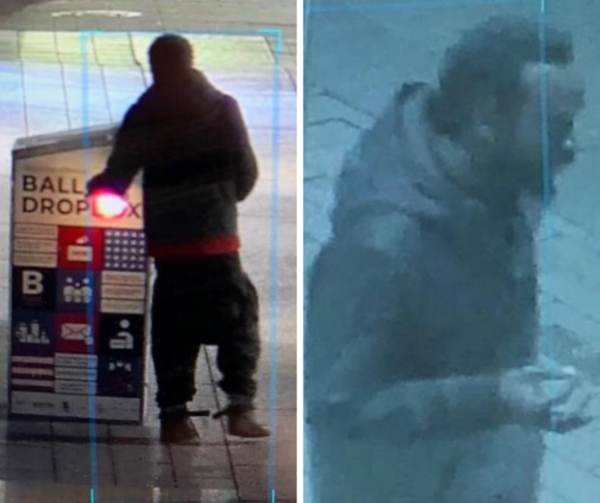 In yet another example of “safe and secure” vote-by-mail, police have arrested a suspected arsonist who *allegedly* lit a ballot drop box on fire in Boston, rendering dozens of ballots indecipherable and damaging dozens more.

A Boston man has been arrested in connection with the burning of a ballot box in the Back Bay over the weekend, police said.

Worldy Armand, 39, is set to be arraigned Monday in Boston Municipal Court on a charge of willful and malicious burning, according to police.

Armand allegedly set fire to a drop box containing more than 100 ballots outside the Boston Public Library around 4 a.m. Sunday.

Officers called to the scene saw smoke coming out of the box before firefighters managed to extinguish the fire by filling the box with water.

Out of the 122 ballots inside the burned drop box, 87 were still legible and able to be processed, Secretary of the Commonwealth William Galvin’s office said. The box had last been emptied around 2:30 p.m. on Saturday.

Voters can go online to see whether their ballot was processed. Those who used that drop box between Saturday afternoon and 4 a.m. Sunday and can’t confirm the status of their ballot online should contact the Boston Elections Department immediately, officials said.

“What happened in the early hours of this morning to the ballot dropbox in Copley Square is a disgrace to democracy, a disrespect to the voters fulfilling their civic duty, and a crime,” the officials said. “Our first and foremost priority is maintaining the integrity of our elections process and ensuring transparency and trust with our voters, and any effort to undermine or tamper with that process must be prosecuted to the fullest extent of the law.”

City officials last collected ballots at the dropbox Saturday around 2:29 p.m., according to the Boston Election Department. The department said the city would mail a new ballot to all voters whose ballots were identified in the Copley Square dropbox at the time. If those voters don’t recast the ballots, the city will hand count the ones recovered.

The ballot box did not sustain physical damage and will still be available for voters.

The official Boston police statement, via their Facebook page, reads:

Investigation Update: Suspect Charged with Willful and Malicious Burning of Ballot Box in the area of 700 Boylston Street in the Back Bay

Update: At about 10:50 PM on Sunday, October 25, 2020, officers assigned to the District D-4 (South End) Drug Control Unit were on patrol in the area of Copley Square when they observed a male matching the description of the suspect from a prior incident in which a ballot box was set on fire. Officers approached the individual and eventually were able to ascertain his identity. A query led to the discovery that the male had an active straight warrant out of Ipswich District Court for Receiving Stolen Property. The male, identified as Worldy Armand, 39-years-old, of Boston, was taken into custody.

Following a thorough investigation, members of the Fire Investigation Unit were able to identify Armand as the suspect in the incident described below.

At about 4:11 AM on Sunday, October 25, 2020, officers assigned to District D-4 (South End) responded to a request for BPD response to the area of 700 Boylston Street in Boston. On arrival, officers observed Boston Fire on scene tending to smoke coming from an early voting ballot box. The ballot box appeared to be on fire, but the firefighters were unable to determine if the fire was burning inside of the box. Eventually, crews were able to extinguish the fire by filling the ballot box with water.

Armand is expected to be arraigned in Boston Municipal Court on the charge of Willful and Malicious Burning.

Oddly enough, no mugshots of Worldly Armand can be found.

In a totally unrelated incident, a USPS mailbox in Boston was set on fire on Monday.