Confidential documents related to the Biden family have vanished UPDATED 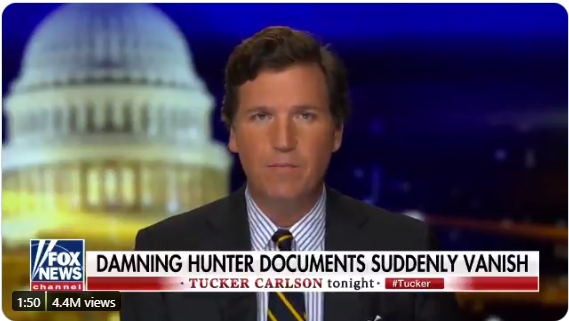 UPDATE: It turns out that my conspiracy theory was just a theory, not a conspiracy:

A spokesman for UPS told The Daily Beast on Thursday that they had located a mysterious packaged that Fox News host Tucker Carlson suggested had been deliberately misplaced or intercepted because it contained “damning” materials on the Biden family. “After an extensive search, we have found the contents of the package and are arranging for its return,” the spokesman said. “UPS will always focus first on our customers, and will never stop working to solve issues and make things right.”

A friend has pointed out that this still leaves questions unanswered. This wasn’t a missing package. This was a package that was found open and empty. The whole thing is peculiar.

Everyone knows the old joke that “even paranoid people have enemies.”  Perhaps that needs to be expanded to say, “Even conspiracy theorists sometimes stumble across real conspiracies.”  During his Wednesday night show, Tucker Carlson said a source had sent documents about more Biden shenanigans to Fox News’s New York office. Carlson’s producer forwarded the documents to Los Angeles, where Carlson was interviewing Tony Bobulinski — but the documents vanished along the way.

The shipping company carefully tracked the envelope’s progress across the country, beginning in Manhattan.  It learned that at 3:44 in the morning on Tuesday, an employee noticed that the envelope was open and empty.  The company interviewed every employee who touched the envelope and searched the drop-off office, the airplanes, the trucks, and the sorting warehouse through which the envelope passed.  It found nothing.  According to Carlson, the company has no idea what happened and doesn’t like it.

We must hope that the source who sent the documents in the first place made copies.  Or perhaps that Fox News in Manhattan made copies.  [Update: copies exist.]  That’s just common sense when allowing any unique and valuable information to leave your custody.

Now for the paranoid conspiracy theory part.  This theory’s predicate is that it wasn’t random that, of all the envelopes that pass through the shipping company’s hands, this was the one that ended up open and empty.  If the documents’ vanishing wasn’t accidental, it means that someone knew what was in that envelope and could track it until the point at which it could be intercepted.

There are only two reasonable choices for that someone: a Fox News employee and a member of America’s intelligence agencies.  The Fox News employee would have known what the envelope contained, but there’s very little likelihood that the employee would have the resources to track the package and abscond with the contents.  If that’s true, the most likely suspect is someone working in government intelligence.

Four years ago, I would never have considered for a second that agents were spying on an American media outlet, tracking documents, and stealing them.  It sounds like the plot of a silly novel or movie.

However, a lot has changed in four years.  We’ve learned that actors in America’s intelligence agencies have actively engaged in spycraft within America’s borders to affect political outcomes.  If the swamp could attempt a coup against a duly elected president, why shouldn’t we assume that the same swamp rats would interfere with the media to protect one of their own?

Incidentally, when I say “one of their own,” I mean someone whom they could control.  Writing at Conservative Treehouse, Sundance points out something obvious: America’s spy agencies must have been fully aware of Biden’s activities (since he was vice president when he was arranging these deals for his family), and they could scarcely have been unaware of Hunter Biden’s drug problems, sexual excesses, and big-money deals as he followed his father around the world:

So, knowing that, why did the U.S. intelligence apparatus not do anything about it?

Yet, at no point did anyone do anything to try and stop the construction of the schemes?

It just doesn’t make any sense… unless….

…Unless the objective of those within the U.S. intelligence background (writ large) was to capture and retain all of this information as part of a black file for use as leverage/control later on against a Biden administration, and likely the Biden family.

The transparent lack of effort by the U.S. intelligence community to intercept the Biden issues well in advance of the compromise of national security, is alarming.  However, it must be considered their lack of action was a purposeful decision…. and then the motive of those entities really becomes the bigger question.

Yes, it sounds far-fetched, but, as I said, we already know that there are people in the United States government who will stop at nothing to control the person in the White House — and, if they can’t control him, to remove him.

Until I hear from Tucker Carlson’s lips that the materials were found safe and that their temporary absence had an entirely innocent cause, I’m sorry to say that some part of me is going to suspect America’s intelligence agencies.