Is Trump’s barnstorming tour helping him or hurting him?

There’s no indisputable answer to that question, of course, and there probably won’t be even after Tuesday. But let me give you three takes and you can choose your own adventure.

They’re helping. On a gut level I think this is right, but there are all sorts of dumb gut-level takes about the election that aren’t borne out by the polling. “I just met four black suburban moms at a Target outside Pittsburgh and they said they love Trump so he’s winning Pennsylvania this year and a majority of the black vote too.” The case that the rallies are helping is clear enough, though. He’s working hard to try to win voters over by holding multiple rallies each day, which is appealing. Voters like to see effort by the candidates. And it’s a particularly good contrast with Sleepy Joe, both in terms of the energy Trump displays and the enthusiasm of his crowds. It’s easy to watch the MAGA fans go nuts when he takes the stage and think, “The polls are underestimating him again.”

And don’t forget that he’s operating at a steep financial disadvantage now. The rallies are indisputably good for him inasmuch as they’re keeping his message on TV at a moment when Biden would otherwise be drowning him in advertising.

They’re hurting. Insisting on holding mass gatherings while national COVID case counts reach their highest levels to date is an … interesting look given how large the pandemic looms in voters’ electoral calculations. Infections have been traced to Trump rallies; his enemies have begun taunting him before events are held by putting up billboards that read “TRUMP COVID SUPERSPREADER EVENT” with an arrow pointing in the direction of where he’s set to speak. USA Today conducted a poll this week asking people how they’re feeling about seeing their president bringing crowds of people together as the midwest is swamped with sickness. Not great, it turns out:

Trump’s decision to hold his signature rallies during a pandemic may have cost him. Two-thirds of likely voters, including 15% of Republicans, said they disapproved in our new @USATODAY @Suffolk_U Poll. https://t.co/uoNm5zk3AQ https://t.co/Dbl96cizij

Not only that, the public’s view of how Trump’s administration has handled the pandemic has actually gotten worse lately, quite in contrast to how they believe other sectors have society have dealt with it: 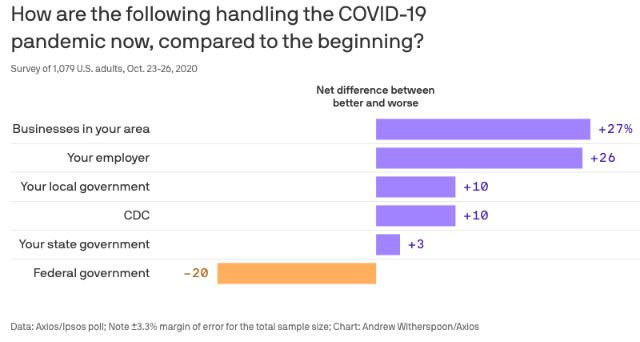 To some people the daily rallies are a sustained “I don’t give a sh*t about COVID” ad. And on top of that, he’s had some strange bad weather-related press in a few cases. The heat today in Tampa sent a dozen rallygoers to the hospital. A few nights ago the cold in Omaha sent attendees to the hospital there after there was a snafu busing people back to their cars in the parking lot. Anything that links Trump in the public imagination with people around him needing medical attention is a bad look at this point.

They don’t matter. This is almost certainly the correct answer to the question in the headline. If the rallies were pulling people towards Trump or pushing them away, presumably we’d see evidence of it in the latest polls (and there are a *lot* of polls dropping each day now). We don’t.

On average, Biden has lost 0.5 points in national polls since the debate, but gained 0.7 points in state polls, closing a bit of a weird state vs national poll gap we’d seen pre-debate. No signs of a tightening race overall, and Biden is probably gaining ground in the Midwest.

The Florida polls in particular have been stubborn for Trump, notwithstanding this morning’s very good result for him among Latinos there. Three quality pollsters released numbers for the state today: Monmouth had Biden up four, Marist had him up four, and Quinnipiac had him up three. If there were a late break for POTUS, you would think it’d be showing up now. And before you say “the polls got it wrong in Florida in 2016!”, go back and look at the numbers from that year. Trump actually led in the final RCP average thanks to some rosy Republican surveys that came in for him at the end. Hillary led by just a point or two in other polls, and CBS had the race tied. Trump’s win in FL wasn’t the colossal surprise that his win in, say, Wisconsin was. He’s trailing today relative to then, in a state he won by just a point.

Here he is today in Tampa riffing on “Anonymous,” a.k.a. Miles Taylor. The experts told him to talk about nothing but the economy, he revealed to the crowd at one point, but he got bored with that subject and wanted to chat about Taylor and Hunter Biden’s laptop instead. Don’t ask me what crimes he thinks Taylor and the New York Times could properly be charged with. At least he’s having fun.

Trump is now devoting time at his Tampa rally — five days out from the election — to railing against Miles Taylor, calling for Taylor’s prosecution.

He also wants the New York Times to be prosecuted for publishing the Anonymous op-ed.