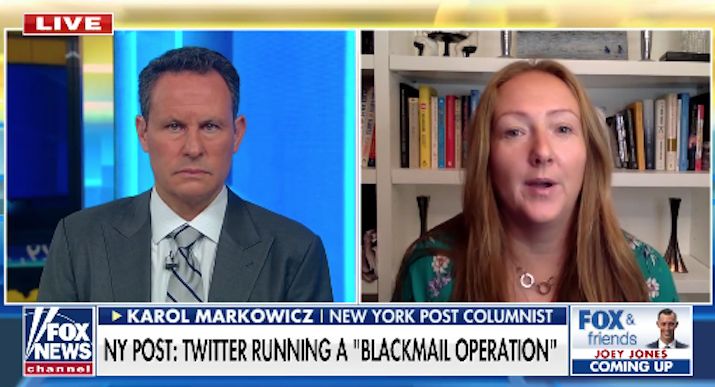 It’s been sixteen days and counting since America’s longest-continuously-operating newspaper has had access to its Twitter account, even just to tweet links to its own articles. Twitter locked out the New York Post after it insisted on promoting its story about Hunter Biden’s laptop and e-mails, as the platform claimed that it was based on “hacked” information and required fact-checking first. And despite admissions that Twitter mishandled the entire affair, including testimony by CEO Jack Dorsey in a Senate hearing this week that the platform had reversed its actions, the New York Post still can’t access its account.

Why not? Twitter is blackmailing the NYP to delete its original tweets before they’ll allow them back onto the platform, the editors claim, even though they have repeatedly admitted that they have no evidence that the story is false:

For all their talk of “neutral platforms,” the Big Shots at Big Tech — Twitter, Facebook and Google — are running a protection racket. They figure they can dictate what Americans get to see and read, and what other media companies must do to reach the public via those platforms.

It’s a clear threat to a healthy democracy — and Congress has noticed. On Wednesday, the Senate launched a hearing to investigate “Big Tech’s bad behavior.”

Center-stage: Twitter’s strong-arm tactics to censor The Post ever since we began reporting on Hunter Biden’s emails. First, it froze our account and banned our stories; then, amid a public backlash, it agreed to unfreeze us — but only if we deleted our original tweets.

Our friend Karol Markowicz told Fox & Friends yesterday that the NY Post would not “bow down” to Dorsey or his enforcers:

Karol makes two solid points, one arguable and the other clearly not. The arguable point is that this amounts to an “in-kind contribution to Joe Biden.” Twitter and Dorsey will rebut that by arguing that Congress pressured them into fighting disinformation after the 2016 election, and that gatekeeping got more strenuous in the years since. It only seems to cut in one direction, but at least it has some basis in fact.

The second point is more telling. If Twitter wants the tweets deleted, why not just delete the tweets themselves? They clearly have the access and the authority to do it, but thus far have not. Why? Karol argues that Twitter wants the NY Post to do it in order to force them to “bow down” to their judgment — and that the editors will refuse to do so, since there wasn’t a problem with the tweets in the first place. They violated no terms of use, and no one has actually disputed the authenticity of the e-mails on which the story was based. To delete the tweets would look like an admission of fault.

Thus we have this absurd situation, in which a platform purportedly in place to facilitate communication has locked out a major American media outlet for a story over which they have no specific objections. For sixteen days. And counting.

Where are all the reporters who claim every Donald Trump insult is an assault on the First Amendment?