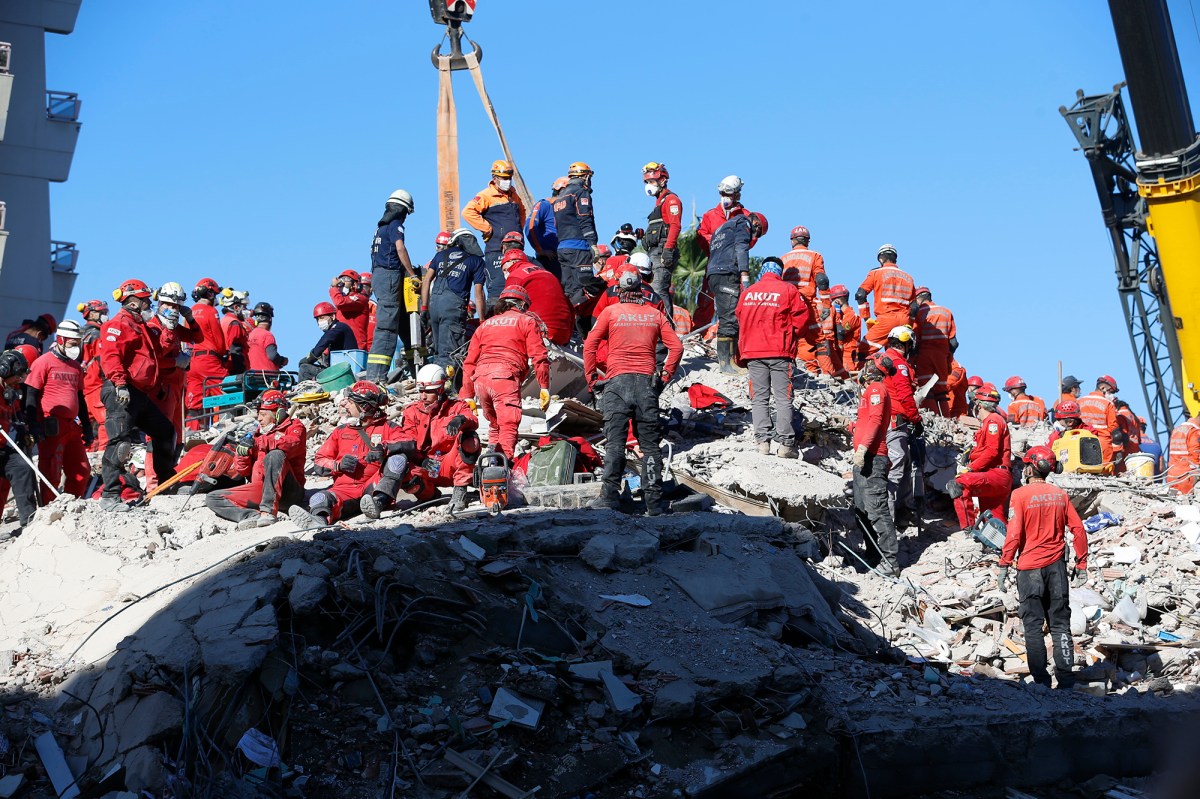 IZMIR, Turkey — Rescue workers extricated a 70-year-old man from a collapsed building in western Turkey on Sunday, some 34 hours after a strong earthquake in the Aegean Sea struck Turkey and Greece, killing at least 60 people and injuring more than 900.

It was the latest series of remarkable rescues after the Friday afternoon earthquake, which was centered in the Aegean northeast of the Greek island of Samos. Search-and-rescue teams were working in nine toppled or damaged buildings in Izmir, Turkey’s third-largest city, but appeared to be finding more bodies Sunday than survivors.

Turkey’s President Recep Tayyip Erdogan raised the death toll Sunday in Izmir to 58. Two teenagers were killed Friday on Samos and at least 19 others were injured.

There was some debate over the magnitude of the earthquake. The U.S. Geological Survey rated it 7.0, while the Istanbul’s Kandilli Institute put it at 6.9 and Turkey’s Disaster and Emergency Management Presidency (AFAD) said it measured 6.6.

Ahmet Citim, 70, was pulled out of the rubble in the middle of the night and was hospitalized. Health Minister Fahrettin Koca tweeted that Citim said: “I never lost hope.” The minister visited the survivor and said he was doing well.

The quake triggered a small tsunami that hit Samos and the Seferihisar district of Izmir, drowning one elderly woman. The tremors were felt across western Turkey, including in Istanbul as well as in the Greek capital of Athens. Hundreds of aftershocks followed. Turkey’s disaster agency said 930 people were injured in Turkey alone.

“It’s not the earthquake that kills but buildings,” he added, repeating a common slogan.

Turkey has a mix of older buildings and cheap or illegal construction, which can lead to serious damage and deaths when earthquakes hit. Regulations have been tightened in light of earthquakes to strengthen or demolish buildings and urban renewal is underway in Turkish cities but it is not happening fast enough.

Two destroyed apartment buildings in Izmir where much of the rescues are taking place had received reports of “decay” in 2012 and 2018, according to the municipal agency in charge of such certificates. Turkish media including the Hurriyet newspaper said one of the buildings, which was built in 1993, was at risk of earthquake damage because of its low-quality concrete and the lack of reinforcements. However, the building continued to be occupied.

AFAD said nearly 6,400 personnel had been activated for rescue work and hundreds of others for food distribution, emergency help and building damage control.

Turkey is criss-crossed by fault lines and is prone to earthquakes. In 1999, two powerful quakes killed some 18,000 people in northwestern Turkey. Earthquakes are frequent in Greece as well.

In a rare show of unity amid months of tense relations over energy resources in the eastern Mediterranean, Greek and Turkish government officials issued mutual messages of solidarity over the quake toll.

Pope Francis on Sunday asked the faithful to pray for the people of the Aegean Sea.

The quake occurred as Turkey was already struggling with an economic downturn and the coronavirus pandemic. So far, Turkey has more than 10,000 confirmed virus deaths but some experts have accused the government of concealing the true impact of the virus with the way it counts new cases.