Proof of slanted polling arrived in our mailbox last week.  A postcard from the Associated Press (AP) addressed to my daughter proclaimed she had been “randomly selected” to participate in a poll to “help strengthen democracy.”  The postcard even goes on to describe the AP as an “independent, not-for-profit news organization committed to the highest standard of objective, accurate journalism for the past 170 years.”  Yes, I will admit, I laughed.  Looking back, it now serves as a bright, neon, flashing sign of how dishonest and standardless the poll would turn out to be.

I will give the AP the benefit of the doubt regarding my daughter being “randomly selected.”  After all, would one intentionally select the 25-year-old daughter of a former journalist knowledgeable enough to recognize the blatant bias of said poll and report on it?  I struggle to believe that even the AP would be that ignorant.  That said, news organizations and media outlets continue to pave new ground in the Land of Stupid, so it is not out of the realm of possibility.

Many of the questions were innocuous, asking basic geographic and demographic information, as well as for whom the person would be voting.  That is where the innocuous factor ends.  The poll goes on to ask many questions that are intentionally, manipulatively inaccurate, and others that are structured to allow the AP to interpret to suit its predetermined goal.  For example, in attempting to gauge the respondent’s primary issues of importance, one question asked if the “economic downturn” would factor into his selection process.  The possible answers to that question range from “very likely” to “not at all.”  The obvious question is what economic downturn, but the poll does not allow one to ask. Essentially, the poll attempts to subconsciously plant the idea that some undisputed “economic downturn” is taking place.  Was the question referencing the economic downturn in Democrat-run, riot- and looting-ridden cities that have shut down and forbidden life outside liberal rabble-rousing?  If so, it should clearly state such.

That is not what the poll’s intention is, though.  It is nothing more than a thinly veiled attempt to imply that the economy is not improving under President Donald Trump — something categorically false, deceptive, and intentional on the part of the AP.  If respondents assert they are voting for President Trump and that such an “economic downturn” is not a factor in their decision, the AP can manipulate those results to imply that Trump-supporters simply “don’t care” about a bad economy.  Never mind the fact that no such economic downturn is occurring outside Democrat-run cities.

Another question not only was poorly worded (as were most of the questions, actually), but used double negatives.  Between the wording and the double negatives that appear to cancel each other out, many taking the poll will not bother to dissect the sentence and will simply select the liberal-promoting answer the AP intends for them to pick.  As a former journalist, I can assure you, such wording is intentional.  Words are a journalist’s lifeblood.  Every single word and that word’s placement is painstakingly intentional, either for good or for evil.

The poll was not overly lengthy, but it was overly biased and overtly deceptive.  It was also insulting.  To ask questions that are slanted, inaccurate, and grossly partisan, assuming that the person taking said poll is too ignorant to recognize the questions as such, is arrogant and delusional.  It is also why I predict that Democrats, media elites, and pollsters are in for a shock on November 3 and following days.  This poll is one more example of why most people do not trust polls, or the media, and refuse to participate.  Given a perfect opportunity to truly explore the diversity of political thought, media elites chose to use it to manipulate those polled.  Perhaps, if the AP is interested in being honest, it should change its name to the Dissociated Press.  That name would at least accurately reflect the organization. 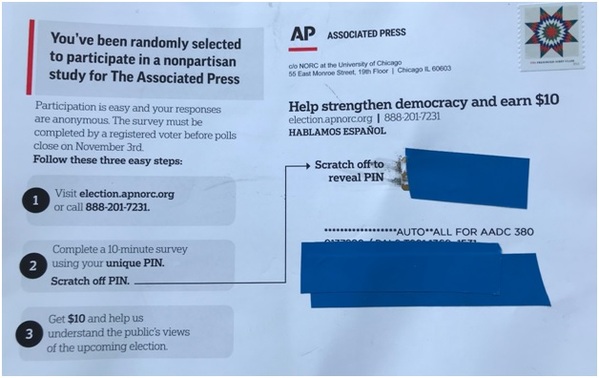 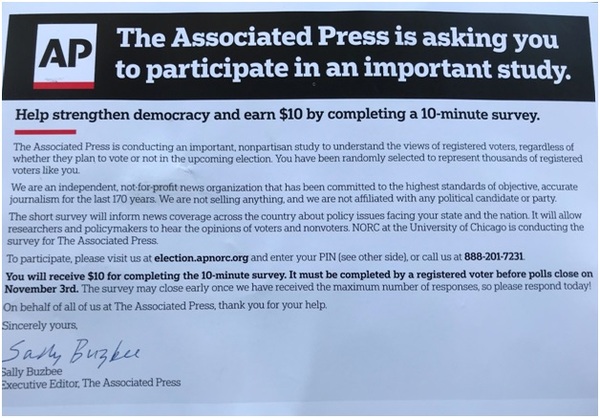