Austria: Terrorist killed in attack was on early release from prison — for trying to join ISIS 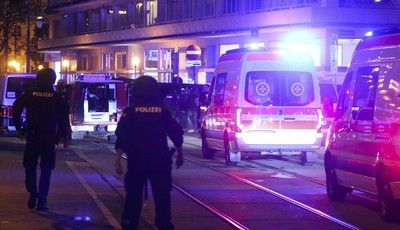 The perp behind yesterday’s terrorist attack in Vienna turns out to be a “known wolf,” if not yet confirmed as a lone wolf, and one that Austrian authorities had captured less than two years ago. Police identified the radical-Islamist terrorist behind the rampage as Kujtim Fejzulai, a 2o-year-old man who just recently been released from prison. His earlier crime? Attempting to join ISIS:

A 20-year-old Islamic extremist armed with an automatic rifle and a fake explosive vest rampaged through a Vienna nightlife district hours ahead of a coronavirus lockdown, fatally shooting four people before he was killed by police, Austrian authorities said Tuesday.

The suspect in Monday night’s attack was identified as a young Austrian-North Macedonian dual citizen with a previous terror conviction for attempting to join the Islamic State extremist group in Syria. …

The attacker, identified as Kujtim Fejzulai, was sentenced to 22 months in prison in April 2019 because he had tried to travel to Syria to join the Islamic State group. He was granted early release in December under juvenile law.

Fejzulai only ended up serving eight months for his attempt to join a foreign terrorist army? That’s pretty lenient even by European standards. His lawyer claimed Fejzulai was “completely harmless” at the time, and claims still to be nonplussed at Fejzulai’s radicalism:

Fejzulai’s lawyer in the 2019 case, Nikolaus Rast, told public broadcaster ORF that his client had seemed “completely harmless” at the time.

“He was a young man who was searching for his place in society, who apparently went to the wrong mosque, ended up in the wrong circles,” Rast said. “I can’t say exactly what happened.”

Fejzulai’s family “wasn’t strictly religious at all; the family wasn’t radical — it was a completely normal family,” Rast said. “I still remember that the family couldn’t believe what had happened with their son.”

Perhaps we can dispense with the notion that youths attempting to join radical violent groups of any stripe are “harmless.” This goes beyond radicalization — it speaks to dire and present danger in such individuals whether they succeed in that journey or not. For what purpose do people join marauding terrorist armies? It’s not to remain “harmless,” that’s for certain, and even ISIS makes that clear in their radicalizing PR. They are recruiting killers by claiming them to be “martyrs,” and increasingly ISIS is shifting to leave the killers in place so that they can carry out massacres against unarmed civilians in Western nations.

What about the other gunmen involved? Multiple media outlets reported that Austrian authorities might be looking for as many as four other suspects. Now it seems they aren’t sure whether there were any others involved:

According to Nehammer, police are searching for more possible assailants who may still be at large, and several neighbouring countries have stepped up border checks.

“It’s difficult for us at the moment to define whether the attack was carried out by one perpetrator or more than one,” said Gerhard Puerstl of the Vienna police.

Police have detained a number of people, but it’s still unclear whether they are considered suspects or just material witnesses:

Austrian police have made several arrests at addresses linked to an Islamic State sympathiser who killed at least four people in a terrorist shooting and stabbing attack in Vienna on Monday night. …

Fourteen people associated with the assailant have been detained for questioning in searches on 18 properties in and near Vienna. Following conflicting reports overnight, Nehammer said on Tuesday afternoon that evidence gathered so far showed no indication that there was a second assailant.

All of these arrests seem a bit late in the day if there were no other shooters. It leaves a number of questions about Austria’s handling of the earlier Fejzulai case. Did Austria ever follow up on Fejzulai? Did they check to make sure he wasn’t falling back into extremist circles after his early release, having served only a third of his sentence? Austrians and especially the Viennese will start demanding some of these answers, and might have some more and different thoughts about releasing proto-terrorists from prisons on consideration of youth.