The Sunshine State was a must-win battleground for the president facing an uphill battle Tuesday, where the path to 270 electoral votes would have become virtually nonexistent early in the evening without the critical swing state.

Trump carried Florida over former Secretary of State Hillary Clinton in 2016 by a razor-thin margin of just more than 100,000 votes, or a single percent.

Trump captured the state in part by the president’s popularity with Hispanics, outperforming in the Democratic stronghold of Miami-Dade County four years ago. While Clinton carried the majority-Hispanic county by more than 30 percent in 2016, Trump lost it this year by an estimated 10 percent.

The Democratic loss in the pivotal southern battleground now poses long-term obstacles facing a party lurching left at breakneck speed, alienating Hispanic voters, a key constituency. A reliably close state on election night, Florida once again drew millions of dollars in advertising and multiple visits by the two candidates themselves throughout the campaign.

The Trump campaign was optimistic about its chances in Florida going into Tuesday, where Democrats led in early voting by only 100,000 votes, encouraging Republicans who expected voter turnout to exceed the slim margin.

Trump’s win in Florida marks the first Election Day GOP victory in a state that polls consistently rated in favor of Biden, who narrowly led in RealClearPolitics’ aggregate of polls by 0.9 percent. CNBC rated Biden winning by 3 percent, Rasmussen rated Biden up by 1 percent, Reuters listed Biden up by 4 percent, and Quinnipiac had Biden winning by 5 percent in polls conducted and released all within the last week. 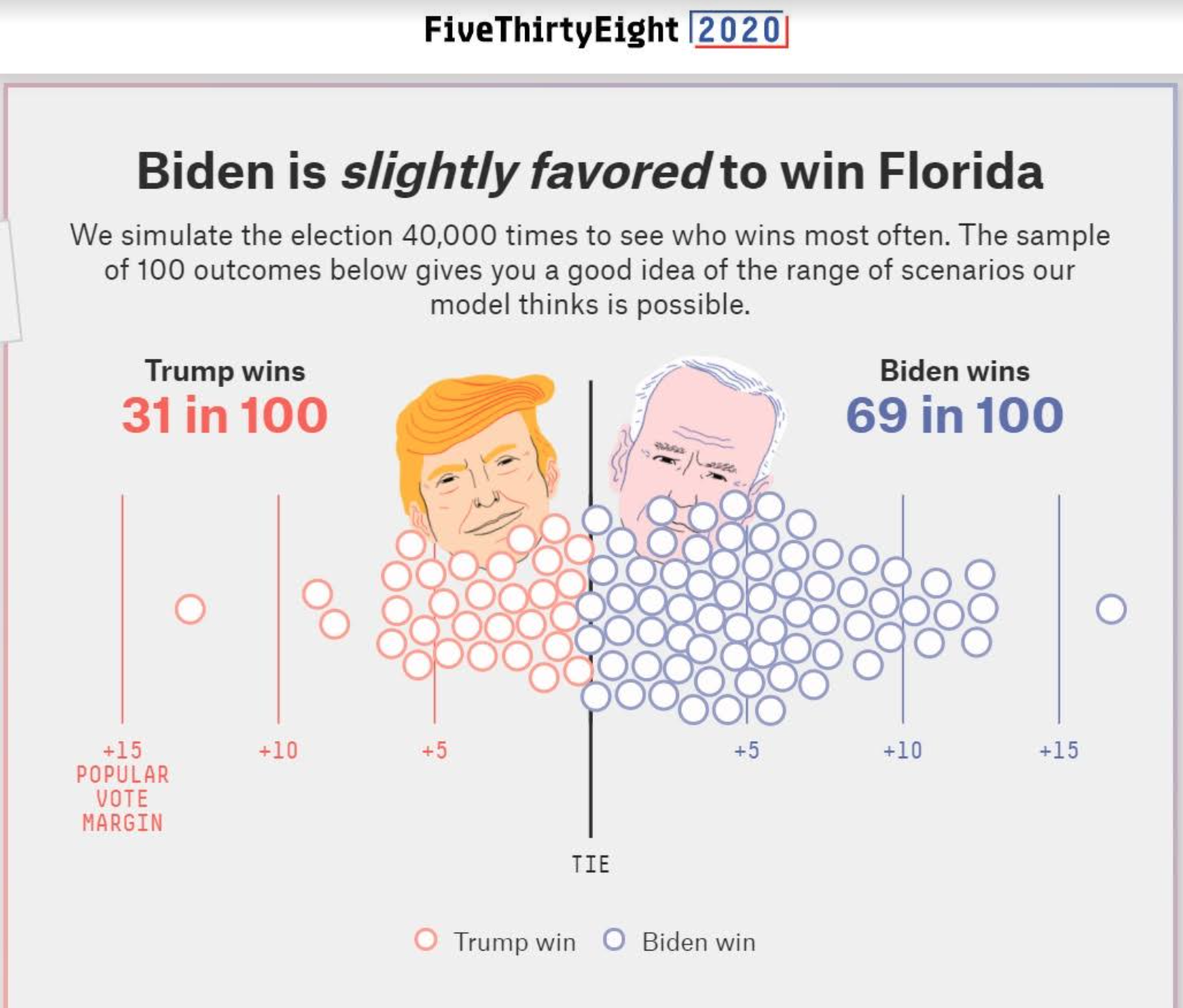 Nate Silver, the editor-in-chief of FiveThirtyEight giving Trump a 31 percent chance of winning in Florida still downplayed Republican chances of winning the state as polls began to close.

Earlier I estimated that GOP +3.5% was roughly the breakeven point (i.e. Trump favored if above that number, otherwise Biden) based on what most polls show is an edge for Biden among independents, but that’s a fairly rough estimate.https://t.co/rcHTbrGABn

The Trafalgar Group, however, which has consistently published outlier polls throughout the fall election season (outlier because they often illustrated Trump leading contrary to the mainstream narrative), showed Trump taking Florida by two percent in a survey released Monday.