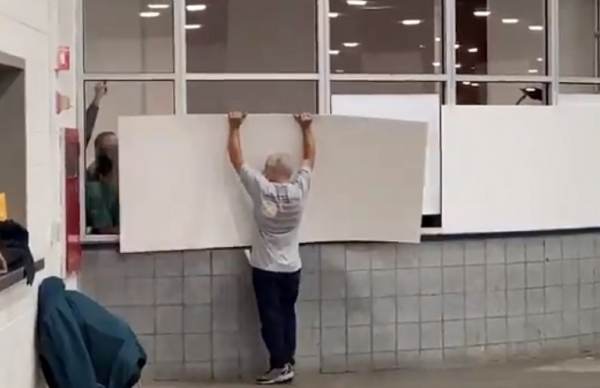 Workers at Detroit’s absentee ballot counting center are now covering the windows to prevent any transparency during the vote counting process.

Fox News reporter Matt Finn tweeted a video of the windows being blocked out, writing that the situation is “growing more heated.”

“The scene at Detroit’s absentee ballot counting center is growing more heated. The windows now being covered up. Allegations of violations. Sec. of State says she welcomes challenges.” Finn wrote.

The scene at Detroit’s absentee ballot counting center is growing more heated. The windows now being covered up. Allegations of violations. Sec. of State says she welcomes challenges. pic.twitter.com/oUL4A0h3Ku

TRENDING: Voter Fraud in Michigan – Massive Dump of Over 200,000 Ballots for Biden All the Sudden Appear Overnight …Update: Officials Call It a “Typo”

The video spread across Twitter like wild fire, as people questioned what they are trying to hide.

Trump had a large lead in the state on election night, but it flipped early Wednesday morning — leading to calls of foul play.

The Trump campaign has filed a lawsuit that seeks to stop the counting of ballots in Michigan.

Campaign manager Bill Stepien said in a statement that “President Trump’s campaign has not been provided with meaningful access to numerous counting locations to observe the opening of ballots and the counting process, as guaranteed by Michigan law.”

“We have filed suit today in the Michigan Court of Claims to halt counting until meaningful access has been granted. We also demand to review those ballots which were opened and counted while we did not have meaningful access. President Trump is committed to ensuring that all legal votes are counted in Michigan and everywhere else.”