A reckoning is coming for the turncoat former Republicans that founded The Lincoln Project and raised just under $100 million as of 3 weeks ago. Instead of diminishing the share of Republicans voting for Trump his share actually increased.  Despite their showy outreach efforts, increased Hispanic support for Trump was a disaster for Biden in Florida and Texas, among many other states.

In the fantasies of these people (buyers and sellers, both), Trump was so self-evidently a racist for criticizing coyotes smuggling in MS 13 and other thugs that Latinx voters would surely reflect their own burning hatred.  As it turned out, there were almost as few such offended Hispanics as there were calling themselves “Latinx.”

For some reason, Democrats thought that a venom-spitting gaggle of disgruntled, mean-spirited former Republicans was just the ticket to help them turn out Republican voters to beat the president.

The Lincoln Project’s belly flop on luring Republicans away was spectacular.

Trump actually garnered even more support from GOP voters than in 2016. Indeed, Edison Research exit polls on Tuesday found that 93 percent of Republican voters supported Trump — three percentage points higher than in 2016, according to numbers from the same firm.

If the ten percent of Republicans voting against Trump diminished by 3 percent, that means that 30% of the Republican defectors changed their minds and returned to the fold. Losing 30% of market share would get anyone fired in a business.

Fools and their money are soon parted. And cry bitter tears over the opportunities lost:

Imagine if the $67 million donated to the Lincoln Project was given to groups organizing in Texas, or to competitive Senate races, or to groups mobilizing Latino voters.

The Lincoln Project lesson is that you can use a career in politics to make mad bank, switch parties & tweet like a teenage girl, and make absolutely the opposite impact you intended or no impact at all.

That — if anything — is the optimistic outcome of this election.

Some of the less charitably inclined ae noticing how much money some of the principals at the Lincoln Project made for themselves:

This is what happens when the Lincoln Project runs your entire messaging. And pockets tens of millions in the process.

LOL. The @ProjectLincoln people admitting that the whole premise of their grift was a scam and the know it all along

Of course the Lincoln Project people aren’t as “depressed” as Democrats: they’re floating on piles of #Resistance money no matter the outcome: https://t.co/QDGAOuKEhG

The swing of Hispanic voters toward the GOP – the opposite of what The Lincoln Project promised – is even more serious for the Democrats. Not only are Hispanics the largest minority group in the United States, their growth in numbers has been the key to the Democrats’ hopes for a permanent ruling coalition. A dream that shattered.

The Lincoln Project thought it understood “the Latinx vote.”

They focused on elites in hopes that that voters would behave like sheep: 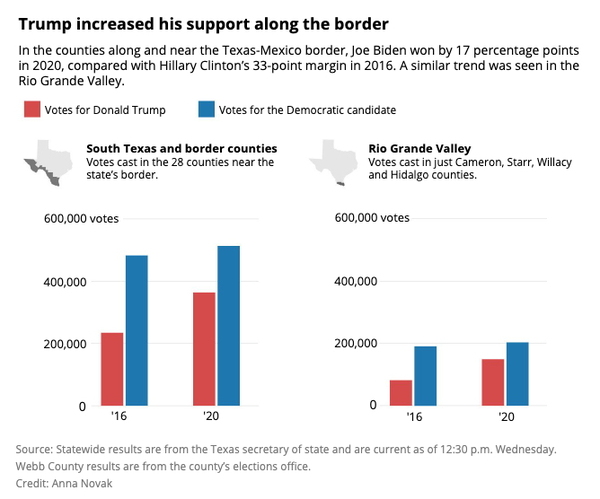 Florida was even worse, for it had a better chance forDems:

The Hispanic trend toward Trump and Republicans is now such a disaster that Dems are getting ready to declare them “whites,” not a minority. Fittingly, the first move in this direction comes from the same newspaper that invented the term “white Hispanic” when George Zimmerman was being pilloried for defending himself against a beating by Trayvon Martin.

In the most memorable phrase coming out of the critically acclaimed HBO series, The Wire,

The Lincoln Project didn’t merely miss, they hit themselves in the ass.