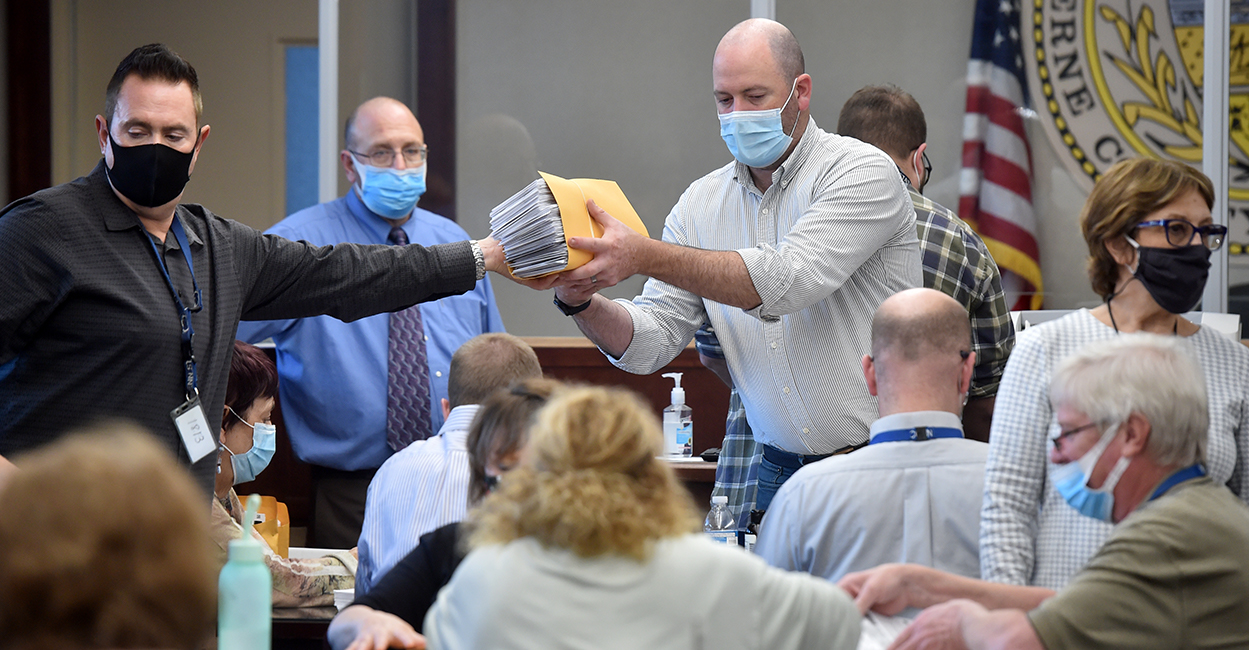 Two Pennsylvania state Republican lawmakers have asked Kathy Boockvar, Pennsylvania’s secretary of state, to step down over her handling of the 2020 election.

“Twice in the last two days, the Secretary of State has fundamentally altered the manner in which Pennsylvania’s election is being conducted,” Scarnati and Corman said in a statement.

According to Scarnati and Corman, Boockvar told the U.S. Supreme Court at the end of October that any ballots received after 8 p.m. on election would be “segregated” from other ballots. But on Nov. 1, she altered her instructions to the counties, telling them to count the late ballots “as soon as possible upon receipt.”

“In at least some counties, because of their machines, it’s not possible to both segregate and canvass ballots as directed, and this late-issued directive leaves open the possibility that timely votes will be commingled with votes received after 8 p.m. on Election Day, ” Scarnati and Corman wrote.

“These later-returned votes remain the subject of litigation before the United States Supreme Court” and thus must remain separate, they added.

The Pennsylvania Supreme Court ruled in October that ballots could be received and counted up to three days after the election. The ruling was appealed to the U.S. Supreme Court but a 4-4 decision reverted the case back to the lower court’s ruling.

The other point of contention centers around instructions Boockvar emailed to the counties the night before the election, asking them to provide information to candidate and political party representatives to contact individuals whose mail-in or absentee ballot had been set aside due to an error or irregularity.

The last minute nature of these instructions meant that it was not carried out consistently throughout the counties, the state senators argue.

But the greater concern regarding Boockvar’s directive is that “the court ruled that is an issue for the legislature to decide, not for the courts or for the department,” Corman said during a Wednesday press conference.

Pennsylvania Supreme Court Justice Max Baer, a Democrat, wrote in the majority opinion for Pa. Democratic Party v. Boockvar, Sept. 8, that to the “extent that a voter is at risk for having his or her ballot rejected due to minor errors… we agree that the decision to provide a ‘notice and opportunity to cure’ procedure to alleviate that risk is one best suited for the Legislature.”

Boockvar responded to calls for her resignation by saying Scarnati and Corman are the ones who should resign for hindering a timely ballot count.

“They don’t like the late counting of ballots because they don’t like anything that allows more eligible voters to be enfranchised, so let’s be clear about that,” Boockvar said, according to  the Pittsburgh Post-Gazette.

“Frankly, I think they’re the ones that should resign for not having allowed Pennsylvania and this nation to start pre-canvassing ballots early as 46 other states across the country have done,” Boockvar said. “We would be getting results a lot sooner if they had.”

Pennsylvania Rep. Mike Kelly, a Republican, and five other plaintiffs have also filed a lawsuit against Boockvar for changing the voting guidelines so close to election day.