In California’s ballot-harvesting rematches, the old slow-walk ballot-count is back

Back in 2018, ballot-harvesting, which had been legalized by California’s Democratic statehouse, managed to unseat oodles of California Republicans in Congress. On election night, vote tallies would show the conservatives ahead, and then … all of a sudden, scads of harvested ballots would come in, and come in, and come in, that is, until the results flipped. Democrats used ballot-harvesting, often by illegal immigrants, to turn all of historically conservative Orange County a mysterious solid blue.

It was bitter as heck for the conservative Republicans, and in at least two cases, there were rematches this year.

So why the heck haven’t the ballots for these races been tallied?

In the case of Central Valley Republican David Valadao, a local farmer, he was ballot-harvested out by leftist T.J. Cox.

Here’s what the AP, via Google (nothing to link to) reports: 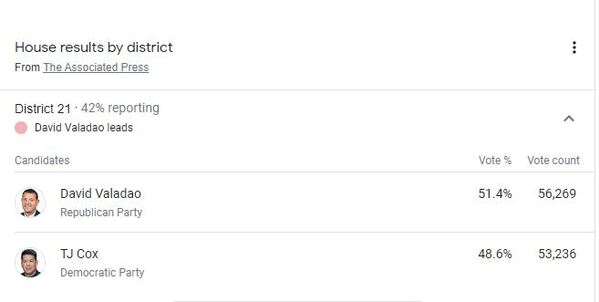 AP said the report was updated just seven minutes ago. Two days past the election and these people still can’t tally the ballots? Why the heck in a smallish district, have just 42% of the ballots been counted? It’s strange stuff indeed since California was quick on the trigger to declare the entire state had gone to Joe Biden, putting those 55 electoral college votes in his column. The congressional choice was printed on the exact same ballots that held the swiftly declared presidential race, and presumably those votes were all counted.

What’s the delay here, they have the Trump/Biden figures, what’s so hard about tallying the whole ballot? Why is only 42% of that race counted? It makes no sense. It would be nice to see if the totals they claim once this slow-walk is done, match up with the totals reported for Biden/Trump, making allowances for blank ballots. Or will there be much higher figures for the congressional race than the presidential one? Nobody is going to believe that. But here we are, Valadao is in the lead, and somehow, the votes are still coming in.

It’s not the only one.

In this case, only 90% of the votes have been counted, not much, but definitely enough to flip the race to Cisneros, if all the uncounted late arrivals just coincidentally manage to vote for him. The New York Times reports that it’s about 2,000 votes.

Yet they still can’t find the time to count them, despite the county in North Carolina where ballot-harvesting fraud occurred in 2018, now being able in its cleaned up state to tally them all in 66 minutes flat.

Frankly, this is starting to stink. Ballot harvestors and their political overlords can see the tally totals and now know exactly how many new ballots to turn in to flip the race. California permits the ballot harvestors three days of custody before they need to turn the votes in. There’s an awful lot of mischief that can be done with ballot harvestors alone in a room for all three days with all their collected ballots.

The process stinks and it wouldn’t be surprising to see both of these races suddenly flip for the Democrats. Don’t put it past them. They have already shown us what they are capable of, and it’s time to raise holy hell.