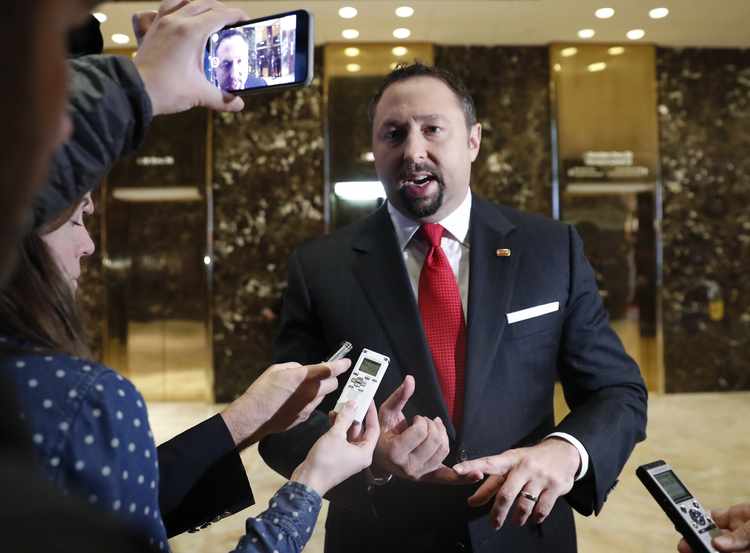 Election Day has come and gone, but Election Week has just begun. So says the Trump campaign, whose chief strategist urged reporters Wednesday evening to wait and see what happens by Friday.

“By the end of this week,” Jason Miller said on a conference call, “it will be clear to the entire nation that President Trump and Vice President Pence will be reelected for another four years.”

And on that same call, the campaign not only claimed that it had a good chance of winning Arizona, Michigan, Nevada and Wisconsin, it unilaterally and without any outside confirmation declared victory in Pennsylvania.

This kind of confidence has to come from somewhere. Either the campaign really does have the best data — necessarily much better data than Fox News and the Associated Press, which called both Arizona and Michigan for former Vice President Joe Biden — or campaign staffers are  bluffing. Regardless, they are working for a president who refuses to lose, let alone concede.

Trump has already exceeded expectations by holding most of the states he carried four years ago and winning over more new, non-white voters, and he quickly declared victory at the White House early Wednesday morning. But the president could not stop a flood of late-counted mail-in ballots from slowly eroding his lead throughout the day on Wednesday. And so he sent his legal team to war, as he had promised he would: The campaign filed suits in Georgia, Michigan and Pennsylvania, demanding Republican observers be given better access to witness ballots being counted and processed.

In Wisconsin, shortly after the AP declared Biden the winner by roughly 20,500 votes, Trump Campaign Manager Bill Stepien announced, “The president is well within the threshold to request a recount, and we will immediately do so.” The move comes even though conservatives in that state warned that recounts rarely shift more than a couple hundred votes in a trailing candidate’s direction.

In Georgia, “President Trump and the Georgia Republican Party have filed suit to require all Georgia counties to separate any and all late-arriving ballots from all legally cast ballots to ensure a free, fair election in which only legal, valid ballots count,” Deputy Campaign Manager Justin Clark announced a few hours later, alleging incorrect counting in Chatham County.

“Bad things are happening in Pennsylvania. Democrats are scheming to disenfranchise and dilute Republican votes. President Trump and his team are fighting to put a stop to it,” Clark said in another statement announcing even more legal action. The campaign is moving to intervene in an existing Supreme Court case regarding the extension of the state’s mail-in-ballot deadline while also seeking an injunction to stop Democrats from allegedly “hiding” ballot processing from Republican observers.

All of it was more evidence of how both campaigns had transformed into legal armies overnight. For its part, the Trump team has been prepping for a drawn-out fight since at least this summer. A senior campaign official told RealClearPolitics in July that if there were any contested election results, Trump’s camp would  “still have 2.5 months to get it figured out.”

A delay like that would make the 2000 recount drama in Florida seem tame. The participants were certainly more reserved two decades ago, and neither had social media. Trump does. He made the most of it Wednesday, tweeting a dozen times, mostly allegations that his opponents were trying to gain an unfair advantage in one way or another. Twitter censored three of his 13 tweets. Elsewhere, his supporters’ anger reached a fever pitch. One man wearing a “Beer, BBQ, and Freedom” T-shirt interrupted a Nevada news conference by yelling that “the Biden crime family is stealing this election!”

A prominent ally of the White House said that conservatives prefer the bare-knuckled populist to past mild Republican nominees eager to avoid conflict, the “George McCain Romneys in a hurry to give Democrats a tour of the White House.”

Trump World won’t settle for anything less than a fight, the ally said, explaining the president’s mindset. They want one, and they won’t accept an unchallenged defeat — especially after being repeatedly told that Trump would lose in a landslide, that Trump would cost Republicans control of the Senate, and that Trump would spell the end of the party.

Both sides are eager to call the election, even at the risk of incidental hypocrisy. After Democrats condemned Trump for prematurely declaring victory, a Biden campaign adviser did the same thing just eight hours later. “We’re winning the election,” Bob Bauer told reporters at a Wednesday press conference. “We’ve won the election and we’re going to defend that election.”

The former vice president all but did the same later in the afternoon. “It is clear that we’re winning enough states to reach 270 electoral votes needed to win the presidency,” he said as running mate Kamala Harris stood nearby. “I’m not here to declare that we’ve won. But I am here to report that when the count is finished, we believe we will be the winners.”

Trump believes as much, or at the very least, refuses to be the loser.