The vast scope of election fraud in America 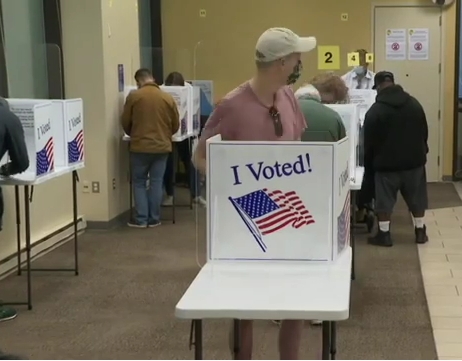 November 5 is Guy Fawkes Day in England, which commemorates a failed plot to subvert the government by blowing up parliament in 1605. In America, the fifth of November yielded its share of plots too. This post summarizes some of the many examples of alleged voter fraud in Democrat-run swing states or districts.

A voter filed a lawsuit claiming that a poll worker gave her a Sharpie to complete her ballot. When the ballot box failed to register her vote, the poll worker refused to give her a new ballot.

Secretary of State Brad Raffensperger announced on Thursday that there were fewer than 25,000 uncounted absentee ballots in the state. Just a few hours later, he revised that to around 55,000 – 60,000 ballots. He said that the 30,000 – 35,000 ballot fluctuation was normal. Uh-huh.

Despite a guarantee under Michigan law, the Trump campaign was denied access to voting locations across the state.

A postal worker whistleblower revealed to Project Veritas that the supervisor at the branch in which he worked instructed carriers to collect all ballots received on November 4, after the election deadline, and put them in a special “express” bin. Once there, they were hand-stamped “November 3” and then forwarded to the distribution center. Keep in mind that postal carriers have skin in the game because the 300,000 strong National Association of Letter Carriers (both retired and current) endorsed Biden, saying that his winning was a matter of “survival.”

William Bradley, who was born in 1902 and died in 1984, voted by absentee ballot in Wayne County.

Nevada was one of the states that used the Wuhan virus to mail election ballots to all registered voters. Project Veritas has a video of a Las Vegas mailman passing a handful of unclaimed ballots to an undercover journalist.

The Secretary of State announced on Wednesday that Nevada would stop releasing election information until Thursday, a signal lack of transparency.

The Nevada Republican Party released a video of a woman whose dead grandmother voted in the 2020 election.

The Trump campaign filed suit in Nevada, alleging that it has proof that dead people and nonresidents voted in the election.

A woman alleged that she could not vote because someone had stolen her mail-in ballot and voted in her place. Thieves also stole her roommate’s ballot.

A poll worker was barred from access when he tried to monitor the vote.

In Luzerne County, someone found nine military ballots in the trash. Seven of the nine were votes for President Trump. No one knows how many other ballots may also have been discarded.

In Allegheny County, with 35,413 ballots still outstanding, the election staff took the day off from counting on Thursday so that they could do “administrative work.”

Republicans election observers went to court to get an order enforcing a 6 feet viewing distance instead of the 100 feet distance that campaign officials were allowing. The court granted the order, but two hours later, while the campaign officials had moved the barriers 94 feet further into the room, they’d moved the ballot machines further away, once again beyond the observers’ line of vision.

Kathy Boockvar, the Secretary of the Commonwealth, tried hard to explain away as a clerical error the fact that countries were returning more mailed-in ballots than anyone had requested.

A Democrat named the “PhillyGodfather ® Sports Bettor” apparently tweeted out a shocking video of bad things happening. His post has since vanished from Twitter. However, if you go to his Twitter feed, he claims that there’s shocking stuff, including individuals voting as many as six times.

Democrat officials are giving the Biden camp private information about the margin of victory they anticipate for him – almost as if they’ve got a hand in creating it.

Democrat Rep. Abigail Spanberger, who had been down by about 1,350 votes, suddenly surged into the lead when officials “discovered” thousands of “overlooked” ballots just hanging around on a flash drive.

Help is on the way:

With the dead having risen from their graves in so many states, a different kind of help is on the way: Matt Braynard made a successful GoFundMe pitch for a study that will allow him to compare to the Social Security Death Index all requested absentee ballots or early votes in Arizona, Georgia, Michigan, North Carolina, Nevada, Pennsylvania, and Wisconsin.