Democrats’ ‘internal war’ will be glorious fun to watch 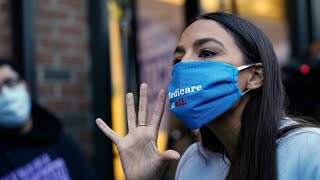 Sky News host Rita Panahi says Alexandria Ocasio-Cortez and the ‘squad’ have been blamed for adversely affecting the Democrats’ electoral performance in the House of Representatives.

“They’re (house Democrats) saying they’ve done badly in this election, way worse than expectations … because people are scared off by talk of de-funding the police and socialism,” she said.

“Already (there is) an internal war happening within the Democrats between the hard-left which Kamala is a part of and the more moderate factions which Joe Biden is a part of.

“It’s starting out and I think it’s going to be glorious fun for those of us observing.”