'It Is Terrifying': Alexandria Ocasio-Cortez Discovers The Garbage Disposal And She Has Questions 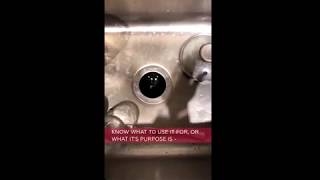 On Instagram last night, Rep. Alexandria Ocasio-Cortez discovered that her new apartment in D.C. has a monster living in the sink, which she later correctly determined to be a garbage disposal: — https://twitchy.com/wp-content/uploads/2019/05/IMG_1253_003.jpg — She then asked her followers for help on how it worked: “This DC apartment is bougie and has things I’ve never seen before. Like what is a garbage disposal really for? Is it better or worse than throwing something in the garbage? More importantly why is it so loud and yelling at me?” — Elaine Godfrey @elainejgodfrey: “AOC currently on Instagram saying she has never seen a garbage disposal before.” https://pbs.twimg.com/media/D57nvdSU0AEwSTt.jpg — LOL. “This is terrifying”: — Kevin Jantzer @kjantzer: “Seriously, how is @AOC qualified to be in Congress she can’t figure out what a garbage disposal is? @realDailyWire @benshapiro @michaeljknowles”

This is actually a pretty common reaction to a garbage disposal for those who don’t live in New York City as they were effectively banned until 1997. Well, it’s a pretty common reaction except for the monster part: — Josh Holmes @HolmesJosh: “The garbage disposal was invented in 1927. Used by virtually every American household outside of NYC.” — Many apartments are still without the device: — Amanda Mull @amandamull: “I’ve never known anyone in NYC to have a garbage disposal, even people with places expensive enough to have a dishwasher or washer-drier (VERY expensive). I think about this all the time, bc ever awful college apartment I had in Georgia had one but nowhere here.” — Elaine Godfrey @elainejgodfrey: “Yeah, I never had one in New York, either! And definitely didn’t in Iowa, although I have come across several in my life.”

Lamar Graham @LamarEsq: “Garbage disposals are practically nonexistent in NYC. I’ve lived her 27 years, and I’ve never had one.” — So, sure … there’s a reason AOC isn’t familiar with garbage disposals. But it’s a good reminder that the future of the Democrat party that wants to legislate everything from how we power our homes to what we eat has “never really been outside of NYC”: — RBe @RBPundit: “I like how we’re supposed to follow her lead in reshaping the entire global economy while simultaneously ignoring that she’s never really been outside of NYC and only recently learned of the garbage disposal and the fact that plants grow in dirt.”

Twitchy: ‘Winner by KO’! Rick Scott fires back at AOC for her ’embarrassing’ attempt to shame him
https://twitchy.com/sarahd-313035/2019/05/06/winner-by-ko-rick-scott-fires-back-at-aoc-for-her-embarrassing-attempt-to-shame-him/
Twitchy: Alexandria Ocasio-Cortez goes silent when asked if she supports the Maduro regime in Venezuela
https://twitchy.com/brettt-3136/2019/05/02/alexandria-ocasio-cortez-goes-silent-when-asked-if-she-supports-the-maduro-regime-in-venezuela/
Twitchy: ‘It is terrifying’: Alexandria Ocasio-Cortez discovers the garbage disposal and she has questions
https://twitchy.com/gregp-3534/2019/05/07/it-is-terrifying-alexandria-ocasio-cortez-discovers-the-garbage-disposal-and-she-has-questions/