The last four years have been a nightmare for the American left. Now with Joe Biden leading in the election, the Democrats and their supporters plan to implement peace. It’s a claim that’s absolute rubbish. 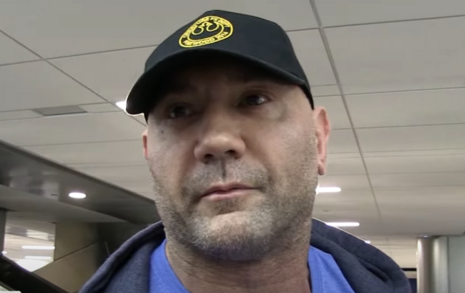 Liberal ideology supporters Dave Bautista and Josh Gad, wrestler and actor respectively, each believe that tranquility will return to the country under a liberal government. Bautista tweeted on November 7, “Thank you to all my brothers and sisters who stood up and spoke out against lies, hate and division for 4 exhausting years to fight for decency. I’ll see you in Georgia.” 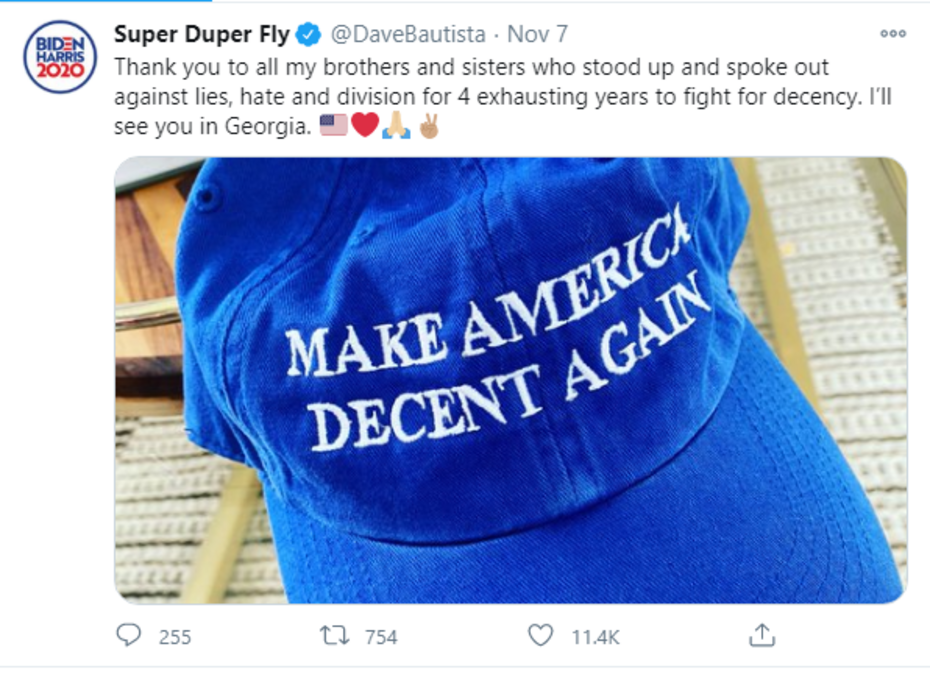 Bautista really bombed this one. The “fight for decency” should be read as “the fight for liberal ideology and revenge.” There haven’t been many signs of decency from the winners. According to their website, the Trump Accountability Project is listing down people who have elected, worked, or funded Donald Trump and vowing to “never forget those who furthered the Trump agenda.” Keeping track of political enemies? The ominous Project’s description sounded like it came from an NKVD briefing room in the USSR, but that didn’t stop Alexandria Ocasio-Cortez from supporting such totalitarian behavior. She always was a socialist.

Bautista himself has sounded far from decent in the past few months, such as when he called Trump supporters “small crowds of idiots,” and “cult like.” Who was sowing “lies, hate and division” then?

Even though they have prepared despotic tactics in order to persecute right-wingers, many left-wingers still see themselves as the victims. Actor Josh Gad reflected this puzzling view when he tweeted on November 8, “This is what I wish people understood. How much pain and devastation was caused over the last 4 years. Without reflection it is going to be very hard to heal.” His words were part of a post he retweeted from someone whining over the lack of understanding for the leftist agenda. 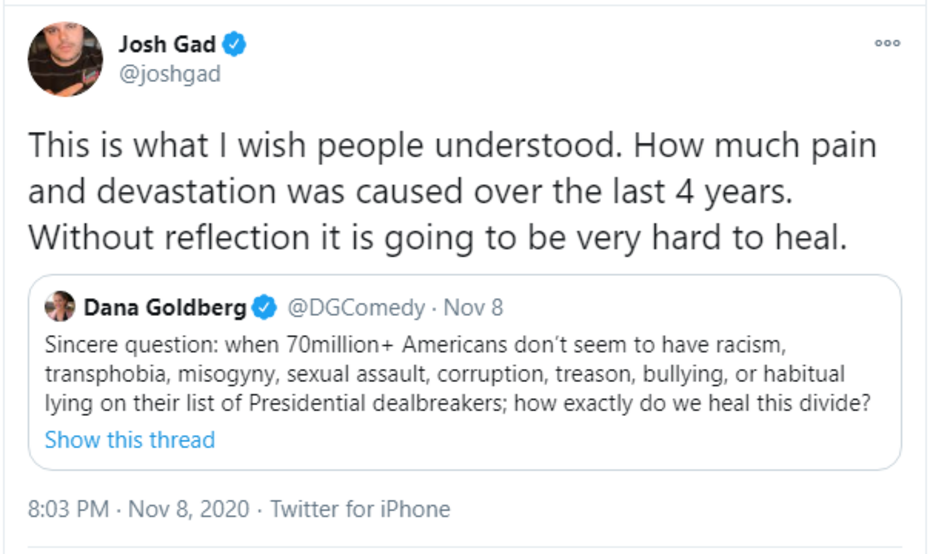 Specifically, the retweeted post whined about how many “Americans don’t seem to have racism, transphobia, misogyny, sexual assault, corruption, treason, bullying, or habitual lying on their list of Presidential dealbreakers.” And they try to portray their candidate as squeaky clean? Joe Biden has been involved in or accused of some of these behaviors as well. And if it wasn’t clear enough already, the left has also been engaging in bullying and habitual lying.

More importantly, do people like Gad want to heal? He himself didn’t sound curative when he said the country is “dangerously racist, pathetic and more willing to vote for hatred than their own lives.” Biden supporters have called for Trump voters to be banned from finding work. The news outlets, the voice of the left, have recommended for Biden “to treat Republicans as ‘the enemies of democracy.’” And this is coming from people who want to pack the Supreme Court and eliminate the electoral college. This sounds more like vengeance than healing.

Bautista and Gad make speeches about decency and healing, but their own actions belie their words and reveal that the real source of lies, hate, division, pain and devastation in this country comes from people like them.