Fox News pays the price for betraying its viewership 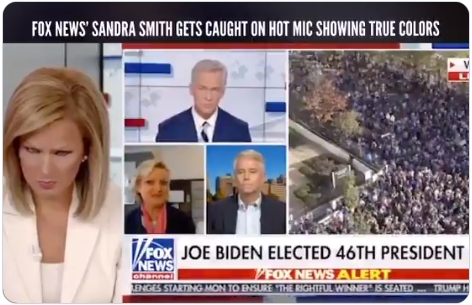 Under Roger Ailes, Fox News was reliably conservative.  When he left, and when Rupert Murdoch handed the reins over to his sons James and Lachlan, things started getting shaky.  James, the fiery leftist, left Fox only this July.  Now Lachlan, who is married to a fiery leftist, is at the helm, helped by Paul Ryan, the RINO rodent, among others on the Board.  With this leadership, while voters have rightly suspected creeping NeverTrumperism in the newsroom for some time now, it all came to a head with this election.

Things went pretty sour for viewers when Chris Wallace turned the first presidential debate into a three-way affair, with Wallace siding with Biden.  Nevertheless, viewers were willing to give Fox another chance on election night.  Fox failed that test.

The kill switch for many viewers was that Fox News hired a hard leftist to run its election desk on Election Night.  Predictably, Arnon Mishkin called the race in ways only a leftist could love.  With hundreds of thousands of votes outstanding, he called Arizona for Biden.  Meanwhile, he refused to call obviously pro-Trump states such as Texas and Alaska.

Things have gotten worse since then.

On Monday, Neil Cavuto deliberately cut off Kayleigh McEnany as she summarized information from the thousands of affidavits that the Trump campaign has collected from across America show egregious election misconduct in swing states.  Offended by information challenging the “Biden is victor” narrative, Cavuto announced to viewers, “Whoa, whoa, whoa.  I just think we have to be very clear.  She’s charging the other side as welcoming fraud and illegal voting.  Unless she has more details to back that up, I can’t in good countenance continue to show you this.”  And then he severed Kayleigh’s feed.

Cavuto seems to have been watching too much CNN and MSNBC.  That’s where you learn that anything a leftist said is true until proven…never mind, it’s always true.  Meanwhile, anything a conservative says must be censored.  Bad move, Neil.

But wait, there’s more!  (I love saying that.)  Also on Monday, Fox News’s Sandra Smith, unaware that she was being filmed and recorded, really let loose when a guest said that the media’s calls for a given candidate do not make that person president.

Her small eyes glowing a demonic red, Smith grimaced at the camera.  She then announced to someone in the studio how important she thinks she and the rest of these ill informed, uneducated, leftist hacks are.  “What?  What is happening?  Trace, we’ve called it.”

HOT MIC! “We need to look into it”, listen to the Fox anchors response! 👀
pic.twitter.com/yupBEFwpRg

Don’t you understand, People?  The Constitution is nothing.  Nothing!  What’s important is that a bleached blonde has spoken.

Fox viewers were not happy.  When Bret Baier tweeted out an innocuous invitation that people should join him and Martha MacCallum on Saturday night for the news, almost 30,000 people exploded in rage, compared to the one thousand or so who “liked” that tweet.  Baier eventually deleted the tweet.

The real viewer revenge, though, isn’t on Twitter.  It’s in the ratings, which have collapsed:

Fox is still going to stumble along thanks to viewer loyalty to stalwart personalities such as Sean Hannity, Tucker Carlson, Greg Gutfeld, and Maria Bartiromo.  As long as its news people, though, continue their NeverTrump leftward lean, the Fox News show will bleed out until it’s gone.

Hemingway said of bankruptcy, the trajectory goes “[t]wo ways. … Gradually and then suddenly.”  We can probably expect the same at Fox as viewers, finding Fox’s current conduct unforgivable, reorient themselves to Newsmax and OAN, two rising conservative outlets.